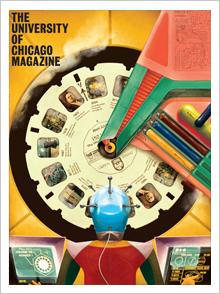 The University of Chicago’s Urban Labs turn promising ideas for helping cities into hard evidence of what works.

Historical postcards capture the University as it was and as it wanted to be seen.

As the historic document turns 800, David M. Rubenstein, JD’73, reflects on preserving a Magna Carta in the United States.

Sweet honey in the rocks

The history of beekeeping stretches back centuries, the director of the Oriental Institute found when a hobby turned into a scholarly pursuit.

Back to the future

For a century, the Renaissance Society has focused on artists and the ideas that inspire them.

News you can use

Although Leonardo da Vinci famously made realistic sketches of the moon’s surface spots in the early 16th century, the first published images of the moon as seen through a telescope were Galileo Galilei’s.

Maroon football, by the numbers.

As a researcher, Caroline Albertin, SM’12, a PhD student in organismal biology and anatomy, has always been partial to weird animals: mussels, centipedes, cave fish—and cephalopods.

Four professors, an alumnus, and an intern on how and why they tweet.