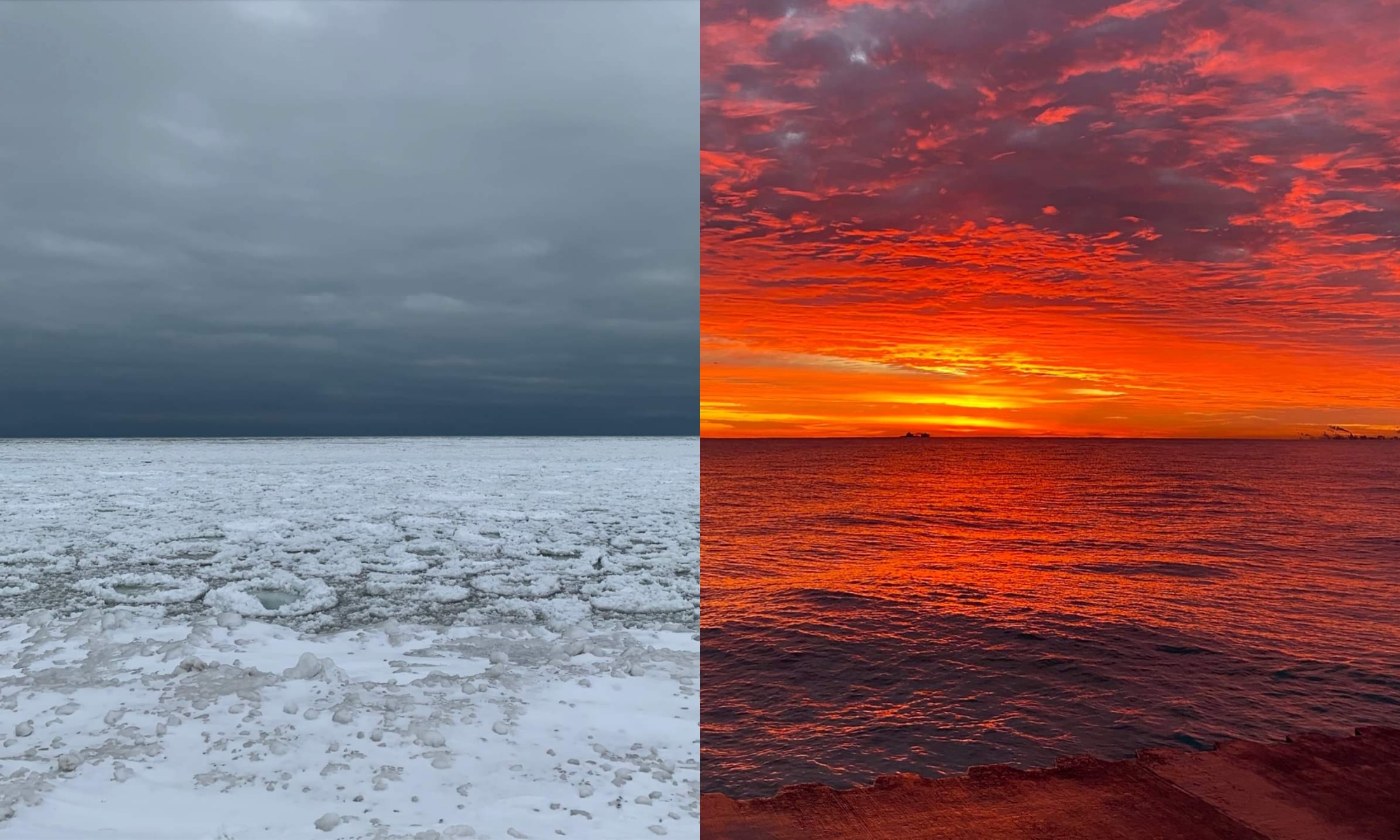 Two of the photos students contributed to the project 100 Views of Lake Michigan.

The photos were displayed in the Stuart Hall Reading Room, in residence halls, and on lamppost banners (they started out with 100, says Laura Steward, curator of public art, but some were stolen). The photos were also printed on laptop stickers and coffee cups: “a way for students to bring art along with them wherever they go,” according to the project’s website. 100 Views of Lake Michigan was the first of an annual series of public art projects directed by Steward and artist-designer Jason Pickleman.

In an interview with the Core, edited and adapted below, Steward explains how the project began with “a stunt” to inspire student participation.

“Last fall I hired a group of student interns to serve as cocurators of 100 Views. Early on they were trying to figure out how to make other College students aware of the project. They needed to get the word out that everyone should take pictures of the lake and send them to us.

“We decided to have a party at the Point with free food. Doughnuts apparently are very important to the productive creative life of undergraduates. The problem was, the students said, no one reads their email, no one looks at anything. So what are we going to do to let people know?

“It was during midterms, and they knew a huge number of people would be at the Regenstein Library on a Sunday afternoon. So we had a massive banner made—I think it was 30 feet by 20 feet—with one of the images from 100 Views and a QR code. They decided to stage it on the north side of the Regenstein, in the sunken garden there.

“At 3:45 on that Sunday, the interns went to every floor of the Regenstein, passing out little pieces of paper that said to look out the back window at four o’'clock, along with a little piece of candy—just something to say, we come in peace.

“And sure as the world, just before four, everybody got up and silently walked over to the windows. The students ran out with their big crazy banner and laid it on the ground. Then they did a bunch of silly antics.

“The QR code on the banner was readable from the library. So everyone pulled out their phones and scanned it and saw, come to the Point, we need your pictures, eat doughnuts, 100 Views.

“It would have been great to have more interns to help out, because some had COVID and couldn’t be there. But one student’s grandparents were visiting and they actually participated in the stunt.

“These public art projects are fairly low stakes, which is a virtue, because we’re doing a lot of experimental things, and some may fail. That is, if we succeed, some will fail. We’re trying to be experimental.”