Anna Kasprzycka prefers solitude before her performances. A native of Gdańsk, Poland, and a member of the Gdańsk Academy of Music, she came to Hyde Park two weeks ago to participate in the 47th Annual Rockefeller Carillon Festival. The concert series, The Bells of Summer, occurs every Sunday afternoon through August 19. Visiting carillonneurs (a word not recognized by spellcheck) from all over the world mount most of Rockefeller’s 271 steps, stopping in the carillon playing cabin where they strike the bells of the world’s second heaviest instrument for the crowd sprawled lazily on the east lawn. Before every performance, a tour is offered, which gives people the opportunity to climb to the top of the Rockefeller tower, stopping along the way in the surprisingly sizable carillon playing cabin for a brief tutorial on the bizarre instrument. I took the tour before Kasprzycka’s recital, climbing the stone, spiral staircase in 85-degree weather along with nine others, among them a precocious preteen and his younger sisters who, try as they might, could not quite make out grandma’s house through the tower windows. As we entered the cabin we found Kasprzycka sitting against the wall, not looking at anything in particular. Declining an invitation to join us to the top of the tower, she said she must remain alone before the performance. As our tour guide led us through the door, she called out, “But you will take me up after?” On the way up from the carillon room, our guide had pointed out several bells, close enough to touch, mentioning off-handedly how loud they can be when struck. And these are only the smaller bells. The Laura Spelman Rockefeller Memorial Carillon was designed in a unusual fashion: the larger, lower-register bells sit beneath the carillonneur, with the smaller ones placed atop so that the player may hear both simultaneously. We were on our way back down when Kasprzycka, apparently forgetting her promise to postpone her performance until we returned, began the concert. The bells—even the small ones—were indeed loud. We covered our ears and sought sanctuary in the playing cabin. Kasprzycka played pieces primarily composed for other instruments but arranged for carillon, including a Bach prelude and a piece by the modern Polish composer Roman Maciejewski. Though the playing cabin is air conditioned, Kasprzycka fanned herself with sheet music between tunes, frantically swapping out used sheets for the new ones and rubbing her hands, which must suffer from banging repeatedly against the heavy carillon keys. Before the concert, she showed us how a loose fist is the best way to safely play the large wooden pegs, the heaviest of which require a significant effort in order to strike its bell. Unfortunately I left the cabin before getting to watch her use that technique to play an adapted version of Scott Joplin’s “The Entertainer.” Between selections, we left Kasprzycka to play in her solitude and bounded down the stairs, lest she strike a deafening chord before we could escape the danger zone. I joined the main crowd out on the lawn. Picnics, lawn chairs, and Sunday naps abounded as Chopin’s “Raindrop” Prelude trickled down from the heights of Rockefeller Chapel on an otherwise beautifully sunny afternoon in Hyde Park. 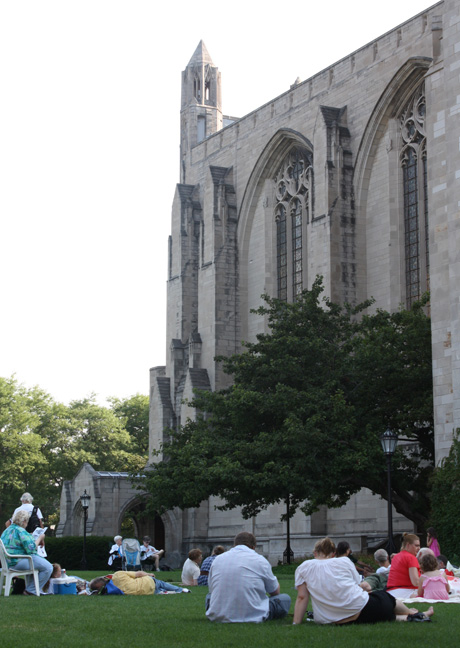