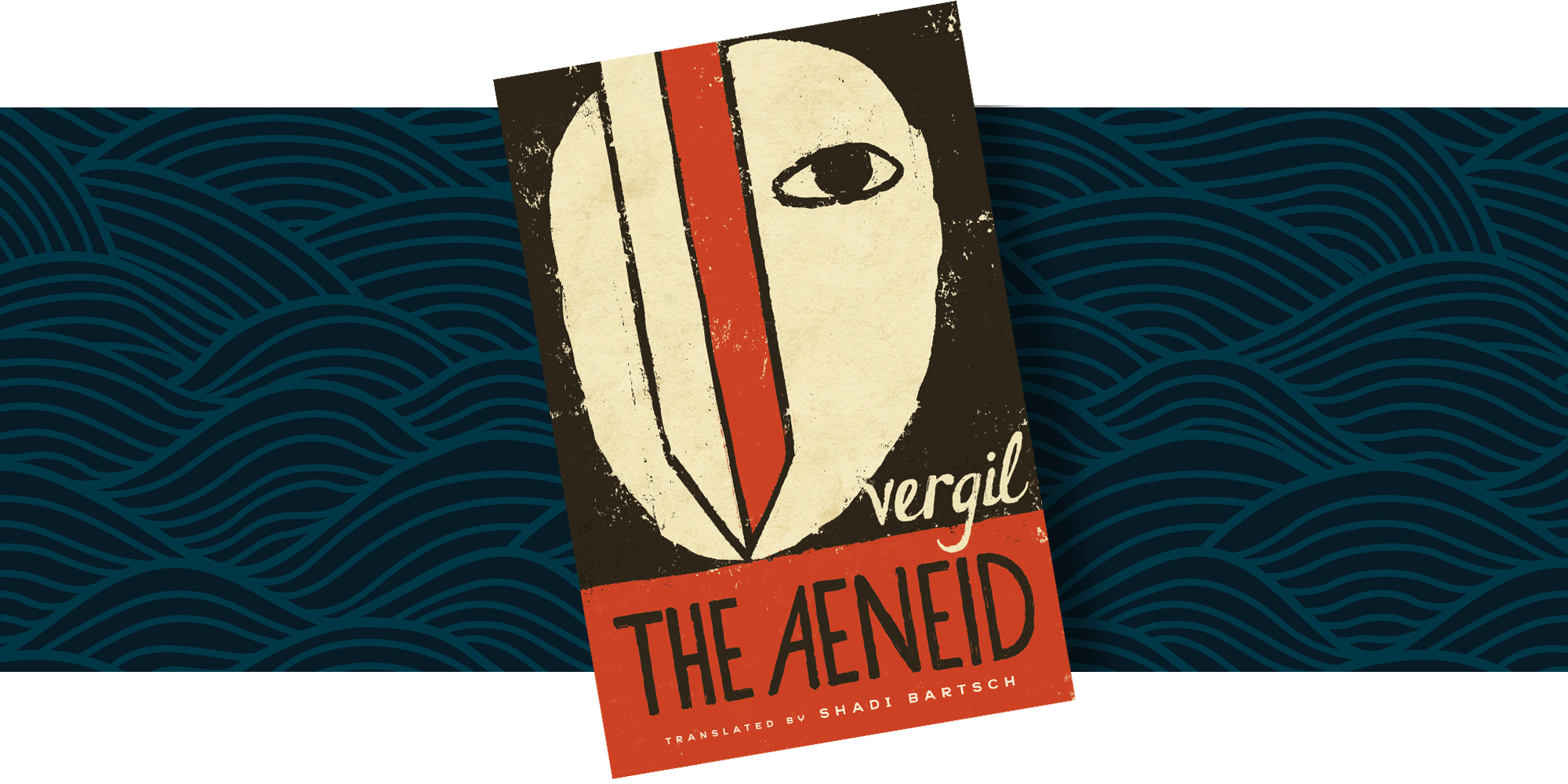 “In our age, the Aeneid has more to say to us than ever, especially about the costs (and to be fair, benefits) of national ideologies and the way that myths of origins and heroes are created,” writes Shadi Bartsch-Zimmer in the introduction to her translation of the epic poem.

An excerpt from The Aeneid, translated by Shadi Bartsch.

In the opening lines of the Aeneid, Vergil tells of the goddess Junoʼs wrath aimed at Aeneas and his Trojan followers, and her efforts to keep them from threatening her beloved Carthage as they flee from ruined Troy. Shadi Bartsch-Zimmerʼs translation follows the original line for line, captures its rhythm, and emphasizes alliteration, one of Vergilʼs key poetic effects. The translation includes a glossary and explanatory notes.

Read an interview with Shadi Bartsch-Zimmer about this new translation of the Aeneid.

My song is of war and a man: a refugee by fate,
the first from Troy to Italyʼs Lavinian shores,
battered much on land and sea by blows from gods
obliging brutal Junoʼs unforgetting rage,
he suffered much in war as well, all to plant
his town and gods in Latium. From here would rise
the Latin race, the Alban lords, and Romeʼs high walls.

Remember for me, Muse. Tell me the reasons. What pain,
what insult to her power, moved the queen of gods
to drive a man famous for piety[1] through misery
on misery? Can such anger grip godsʼ minds

An ancient city built by colonists from Tyre
faced Italy and Tiberʼs mouth across the sea:
wealthy Carthage, fierce and fond of waging war.
They say that Juno loved her best; even Samos
came in second. Here the goddess kept her weapons
and her chariot; this land would rule the world
if fate allowed. This was her aim and hope.
But sheʼd heard that men of Trojan blood
would topple Carthage and her heights one day.
Theyʼd be a people proud in war, an empire
fatal for her Libya. This was what the Fates had
spun, this was Junoʼs fear. She remembered
how sheʼd fought at Troy to help her cherished Greeks.
Still other reasons for her rage and bile
remained deep-rooted in her heart: Parisʼ scornful
verdict on her beauty, the honors paid by Jove
to kidnapped Ganymede, her hatred for that race.[2]
Enflamed by this, she barred from Latium
the sea-tossed Trojans, the few left by the Greeks
and cruel Achilles. They roamed for many years,
over many oceans, forced on by the Fates.
To found the Roman race required such great effort.

Sicily had slipped from sight. The Trojans gladly
sailed for open sea, their bronze prows churning foam.
But Juno, nursing her eternal wound, thought
to herself, “Am I to leave off from my plan
and fail to turn the Trojan king from Italy?
It seems that Fate forbids it. Then how could Pallas
burn the Argive fleet and drown its crew, just to
punish the mad crime of Ajax, son of Oïleus?[3]
On her own, she hurled Joveʼs[4] lightning from the clouds,
wrecked the ships, and whipped up waves with wind;
she grabbed up Ajax in a gust and spiked him on sharp
reefs—the man puffed fire from his punctured chest!
But me, the queen of all the gods, Joveʼs wife
and sister too, for years Iʼve had to fight
against a single race! Now whoʼll worship me
or put gifts on my altars as a supplicant?”

Her hot heart fixed on these thoughts, Queen Juno reached
Acolia, a land that teemed with storms and clouds.
In his colossal cave, King Aeolus
ruled the warring winds and howling gales
and locked them up inside. They roared around the latches
outraged. Over them, the mountain murmured
mightily. Aeolus, sitting in his stronghold,
scepter in his hand, soothed their angry spirits.
Otherwise, theyʼd seize the oceans, lands,
and deepest sky, and blast them all away.
It was this fear that made the mighty Father
hide them in a lightless cave and heap mountains
on top. He chose a king who swore heʼd curb
the winds or free their reins as he was told.
Now Juno came to wheedle him: “Aeolus,
the father of the gods and king of men
chose you to calm the waves or whip them up with wind.
A race I hate travels the Tuscan sea:
they bring the beaten gods of Troy to Italy.
Rouse the winds to gale-force, sink the ships,
or scatter them and fling the crew into the sea.
In my retinue are fourteen gorgeous nymphs;
Deiopea is the loveliest of all. Sheʼs yours—
just do me this favor. Iʼll join you both
in lasting marriage, so sheʼll spend her years
with you and make you father to fair children.”

Aeolus said, “Your task, O Queen, is to know
your wish and will; mine, to make it happen.
Thanks to you, I have this little kingdom
and Jupiterʼs goodwill. I dine with gods,
Iʼm master of the storms and wild weather.”

Saying this, he struck the hollow mountain
with the butt-end of his spear. A battle-line
of winds rushed out the rift and swept over the lands.
Notus, Eurus, and Africus, full of storms,[5]
settled on the sea as one and churned it
from its bed; they rolled huge waves to shore.
Next came the shouts of men, the shriek of ropes.
At once, storm-clouds snatched the sky from sight.
Black night brooded on the sea. The heavens
thundered, frequent flashes tore the dark.
All signs warned the men that death had come.

[1] a man famous for piety: Aeneasʼ piety, at least at the beginning, contrasts with Junoʼs anger, and provides an interesting play on the Iliad, in which it is Achilles, the mortal hero, whose anger drives the epic.

[2] Parisʼ scornful verdict … her hatred for that race: Paris, son of Priam, King of Troy, was once asked to judge which goddess was the most beautiful, Aphrodite (Roman Venus), Hera (Roman Juno), or Athena. As a bribe, Aphrodite offered him Helen of Troy, so he selected her, offending Juno in the process. Ganymede was a beautiful young Trojan boy snatched up by Jupiter in the guise of an eagle to be his lover and a cup-bearer in Olympus. Juno hated the Trojans in general because their founder, Dardanus, was the son of Jupiter by Electra—that is, the product of Jupiterʼs infidelity.

[3] the mad crime of Ajax: Ajax the Lesser raped Cassandra in her temple when Troy fell and was punished for this by Pallas Athena.

[4] Jupiter was also known to the Romans as Jove; the two forms alternate in this poem.

[5] The Roman winds had names. Eurus was the southeast wind, Notus the south, Zephyrus the west, Aquilo the north, Africus the southwest. In the original they are referred to by these names, but after their first appearance (Aquilo appears only once), the translation usually names them by their directionality instead, e.g. north, south, and so forth.