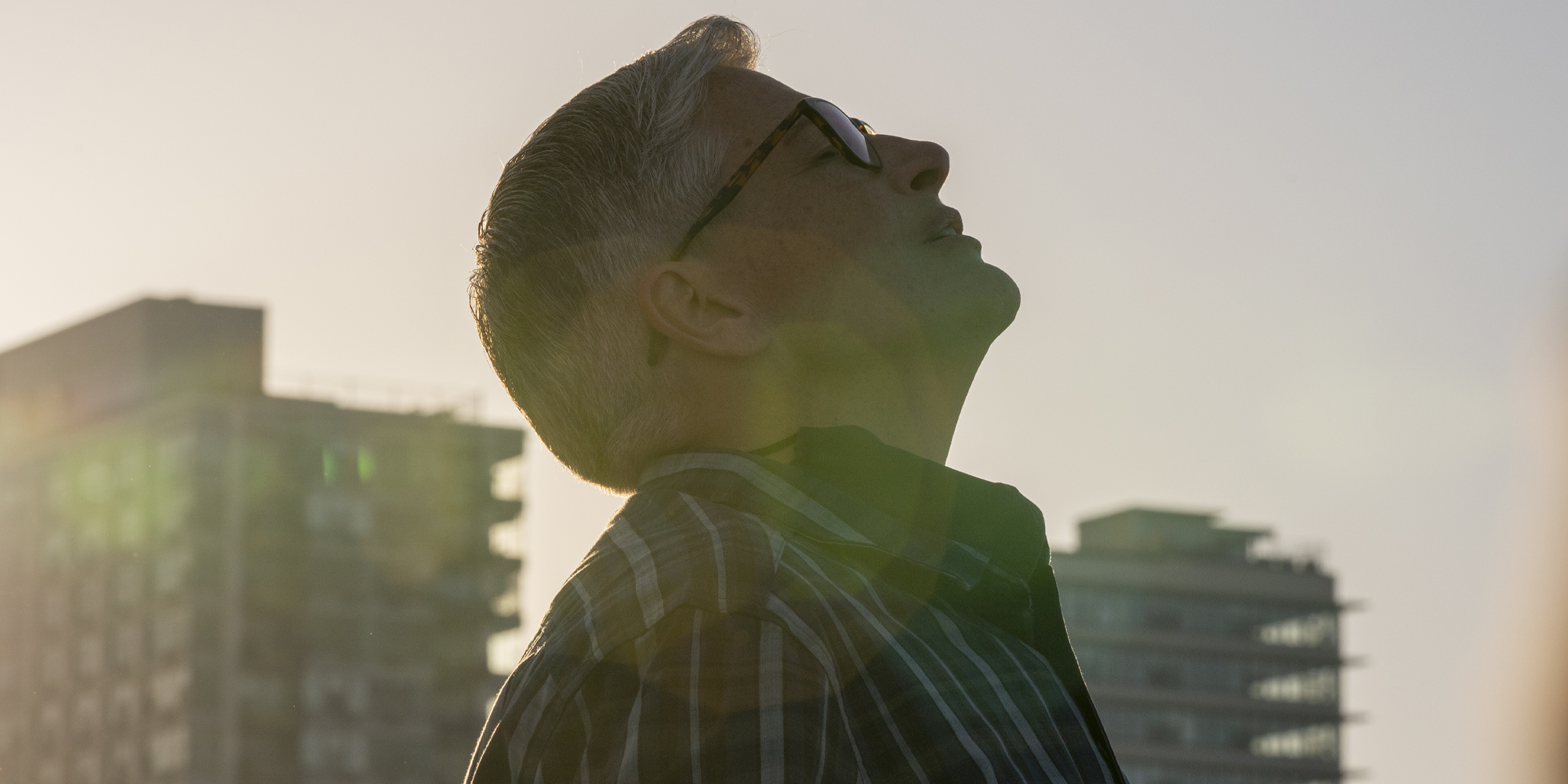 With Work in Progress, Abby McEnany, AB’92, created an unconventional sitcom for anyone who feels different.

For Abby McEnany, timing is a funny thing. In certain ways, she’s always been precocious: she had her first panic attack at age five and was in therapy by eighth grade. In other ways she’s more of a late bloomer: she finished college at 24 and her professional comedy career began in earnest at 40, when she joined the touring company of Chicago’s Second City theater. She was 51 when Showtime greenlit her autobiographical TV series Work in Progress.

McEnany, who still lives in Chicago, knows hers is different from most show business stories, and that’s OK with her—she’s always felt a little bit different. If she’d gotten Work in Progress any sooner, “it wouldn’t have been the right time,” she says. “When I say I take a long time to get stuff, I’m not putting myself down. It’s just how my brain goes and how I need to get there.”

In Work in Progress, McEnany, AB’92, stars as: Abby McEnany. The first season follows Abby—the character—a self-described “fat queer dyke” living in Chicago, through a mental health crisis and a new relationship with a trans man two decades her junior. The second season, which aired this past fall, finds Abby weathering the COVID-19 pandemic, grappling with racism and white supremacy after the murder of George Floyd, and trying, inch by inch, to grow.

Despite all of the above, Work in Progress is very much a comedy, if an atypical one. There are jokes: “I look like Mitt Romney junior,” middle-aged Abby laments at an ultracool queer nightclub. “Junior?” her love interest teases. There are classic sitcom premises: Can Abby and her friend survive multiple family gatherings in one day? There are cameos: “Weird Al” Yankovic appears as the sangria-loving husband of Saturday Night Live alum Julia Sweeney, playing herself, prompting many a “wait, are they?” Google search. (They are not married in real life.)

The series takes big swings, freely mixing pathos, hopefulness, and pratfalls to create a singularly oddball tone. Abby is both the show’s protagonist and its punching bag, a figure whose often-in-error-never-in-doubt pomposity sits alongside her vulnerability and kindness. In one of many positive reviews, Emily Nussbaum of the New Yorker praised the show’s “distinctive, salty vibe, driven by McEnany’s simultaneously self-loathing and self-aggrandizing swagger.”

Talking to McEnany, it’s easy to see how her particular brain produced something at once so tender and so bonkers. She is thoughtful, warm, and effusive, prone to self-deprecating asides and long tangents punctuated by big, throaty laughs. Mid-tirade on the horrors of social media, which she does not use, she catches herself: “Autonomy and anonymity—those two things are so beautiful. I don’t understand this culture that we live in! [Pause.] Wow, is she ranting about social media again? Yaassssss! Damn. Anyway.”

By writing a show about someone who feels different and flawed, McEnany discovered how many other people feel different and flawed too. Not long ago McEnany was out with friends when a stranger came up to her and announced, “I’m an imperfect queer too!” Another time she was recognized on the street while openly weeping. “I was like, ‘Hey, I’m so sorry I’m crying, I just had therapy,’ and they were like, ‘So did I!’”

When McEnany was attending high school in San Francisco, her father would page through a book listing the nation’s top colleges (“they probably don’t even have ’em anymore”) and flag the ones he thought would be best for her. And so it was that McEnany found herself at UChicago—her last choice of the five schools she’d applied to, she admits, but in the end, “out of the five, it was definitely the best suited for me.”

Her first quarter was a rush. “I was really having a ball,” McEnany remembers, showing up at 8 a.m. for her chemistry classes, meeting new people, hanging out in the dorms. She felt like she belonged. “People wanted to be there and learn. … You didn’t have to put on airs.”

And then, “like the flip of the switch,” she was very suddenly very not OK. She’d dealt with symptoms of obsessive-compulsive disorder for years, but not like this: “I was having massive anxiety. I couldn’t touch things. I was counting steps. It was so intrusive in my life.” McEnany went to the counseling center, expecting an intake session and a week’s wait for an appointment. She was sent to a psychiatrist the next day for immediate care.

She tried to return as a full-time student the following year. “And that was—you know,” she says. “I took a lot of incompletes.” But she was determined to continue: “I just knew I had to finish then or I would never finish. Like, I have to graduate and I cannot go home for a year.”

So for the next four years, she slowly chipped away at her history degree, taking classes part- time. “It was a struggle,” she says. “Life is really hard and it hits people at different times.”

On occasion McEnany has treated her slower-than-expected path to graduation as a punchline. In an appearance on The Late Show with Stephen Colbert, she punctuated an anecdote about the pile of unread Noam Chomsky books she owns by saying, “You guys! It took me six years to finish college!” But in quieter moments, she acknowledges she approached her education in the right and only way for her at the time. “It really saved me,” she says. “It really saved me that I was able to do it the way I did.”

Perhaps the biggest difference between Work in Progress Abby McEnany and real-life Abby McEnany is that real-life Abby found improv comedy. Her dad was a comedy fan and she’d always liked making people laugh (“fat kids learn all these defenses so you don’t get bullied, and I’m sure that was part of it”), but the classes she took at Second City in her 20s were the first time she’d seriously pursued being funny.

The art form clicked immediately for McEnany. With no lines to learn or blocking to remember, she felt liberated from anxiety. “For me it was really intuitive. … You’re creating this thing together and it’s based on working together as a group,” she says. “Sometimes it sucks! And sometimes it’s beautiful and hilarious and perfect.”

For the next 15 years, McEnany worked her way up the Chicago comedy ladder, performing at theaters across the city and working day jobs in customer service and as a technical writer. When she got offered a position with Second City’s touring company, she took it, even though it meant walking away from a stable job with benefits in her 40s.

Choosing comedy over comfort—in middle age, no less—was terrifying and joyful at the same time. “It can be really scary,” she says. But it always felt worth it. “I remember one time, I was 48, and I was driving in a station wagon to go do a show at a synagogue on a Friday night for 95 bucks,” McEnany recalls. “And it was like, ‘I can’t believe I get to perform and I get to make $95!’”

For Chicago comedians, commercial acting has long been a way to stay afloat while pursuing improv, an infamously low- (and frequently non) paying art form. But McEnany found that her fatness and visible queerness left her mostly shut out of that world. The process of auditioning for commercials was “hilarious,” she told the Cut in 2020, “because they don’t want a fat woman selling burgers.” The continued exclusion had one useful aftereffect: McEnany realized if she wanted to appear on-screen she’d have to write for herself.

In 2016 she performed a one-woman show called Work in Progress at Chicago’s iO Theater that she and fellow improvisor Tim Mason decided to adapt for a TV pilot. They scraped together just under $30,000 to film it on their own.

McEnany and Mason submitted the pilot to Sundance—but not before arguing about whether it was worth paying the $80 entrance fee for the legendarily competitive film festival. (McEnany eventually agreed, she told the Salt Lake Tribune, on the condition that Mason paid: “You have $80? All right, moneybags.”)

Their scrappy, inexpensive pilot was accepted into the festival, where it caught the attention of Showtime’s director of original programming. Within months, McEnany was the cocreator, writer, and star of a television show.

She used her new platform to cover topics not usually discussed on television—suicide, therapy, the anxiety of using a public bathroom as a gender nonconforming person—and cast people not usually seen on television. Work in Progress depicts the diversity of queer life in a major city, showing both Abby’s older lesbian friend group and the younger, gender-fluid, and more racially diverse scene she encounters through her new boyfriend.

These scenes and characters are drawn from McEnany’s real-life experiences dating a trans man, which shaped her decision to stop identifying as a lesbian—a word that had never felt quite right to her anyway. “If I was still referred to as a lesbian, I’d be totally negating his gender,” she told the Advocate. Instead, she chose the term “queer dyke” for herself. As she told the Cut, she likes to say that her pronouns are “she/her, currently. I think the idea of fluidity is so beautiful, and that’s really helped me figure out that it’s not just gay, lesbian, bisexual.”

At the same time, McEnany was eager for Work in Progress to not be pigeonholed as only a queer show. She was thrilled by how many viewers saw themselves not only in Abby’s evolving queerness—but also in her efforts to live with mental illness, her journey toward accepting her body, and her well-intentioned screwups. Knowing she has helped other people feel seen “just means the world.”

Three years and two seasons of Work in Progress later, McEnany still can’t quite believe the show got made at all. “How did it happen? All these things came into place, which is so outrageously wild.”

She isn’t sure what comes next. (When we spoke, the future of Work in Progress was unknown, but McEnany said she’d be OK either way; shortly before the Magazine went to press, Showtime announced the series would not return.) She’d like to continue writing for television and has a few new ideas—maybe a little less personal next time, “because I couldn’t get more personal than this.”

This is the first break she’s had in a while, and she’s using it to tackle some small life problems of her own. “I’m trying to organize and declutter my apartment,” she says. “And that is never going to happen. But the goal is to get it less cluttered.” It’s a start, anyway. For Abby McEnany, progress always beats perfection.