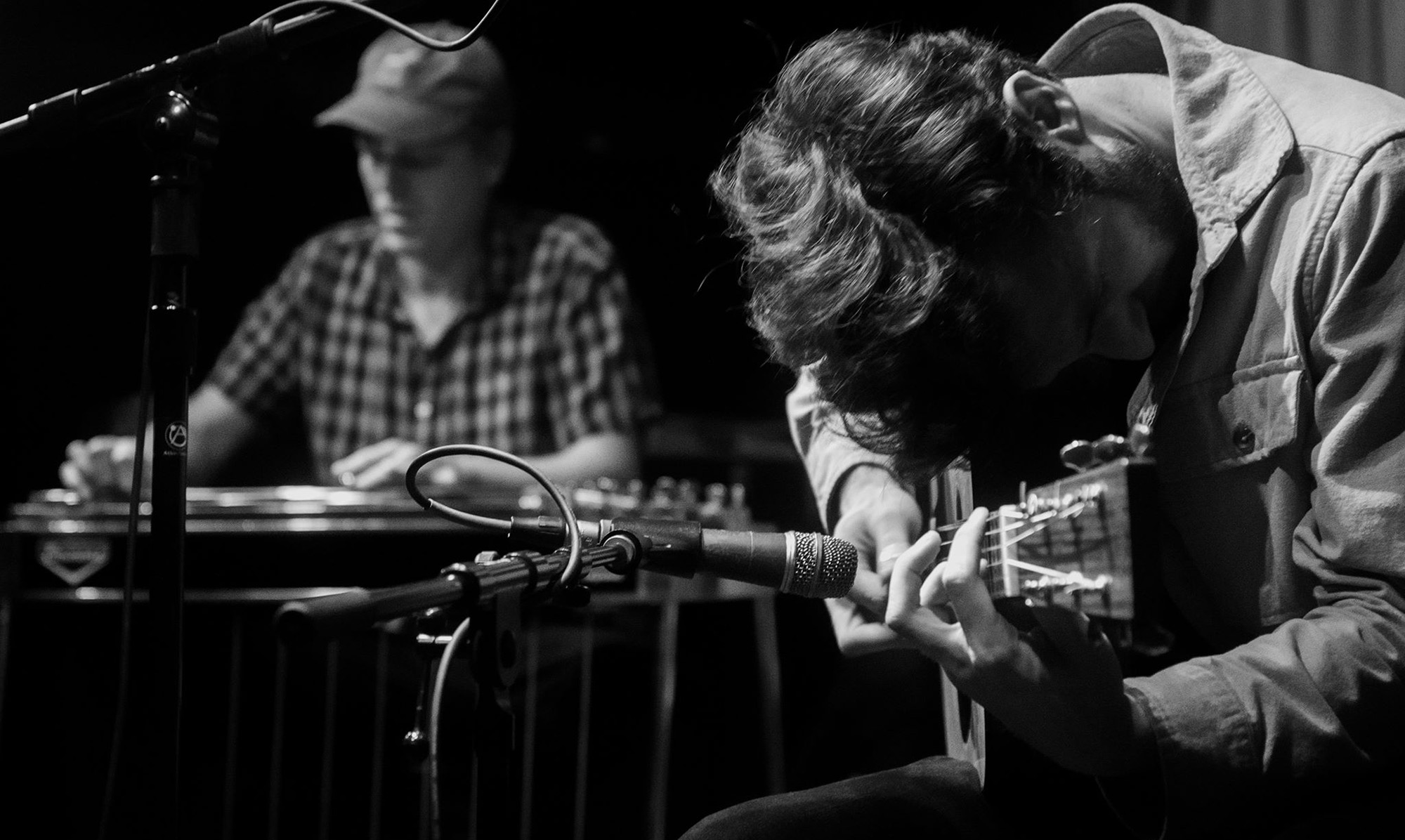 Eli Winter has no words

The guitarist and creative writing major lets his music speak for itself.

College fourth-year Eli Winter describes his music as “thoroughly unmemeable.” It’s not what you’d necessarily expect a twentysomething to listen to, or play—the Chicago Reader noted that the fingerstyle guitar songs on Winter’s debut album The Time to Come (2019) showed him to be a songwriter “wise beyond his years.” The Core sat down with him to talk words and music.

You’re a creative writing major, and yet your songs don’t have any lyrics.

Every so often somebody comes up to me after a show and says, “Hey, you should try putting words in your songs next time.”

I sing when I want to. I just haven’t wanted to for most of the time I’ve been really playing shows. Part of it’s a function of what I have, which for a long time was just acoustic guitar. It doesn’t feel as unintuitive as it might seem at first glance.

One of the reasons I started playing this kind of music was that I was feeling low enough that just the sound of the voice in a song felt incisive, like it was cutting into me. I also like the thought of it being unbound from a definite meaning or emotional tenor. A lot of my favorite kinds of music have either a sort of inquisitiveness—in terms of different sounds I might incorporate—or a sort of malleable emotional center. It’s nice to have the meaning out of my hands. I wouldn’t be able to control that.

Maybe it makes it hard to market a record. But also, not having lyrics still is kind of goofy. Which is cool. Goofy is good.

How would you describe your music?

I’ve started to realize it wouldn’t hurt to have an elevator pitch. Which I don’t really have. If I need to put it in just a couple words I’ll tell people I play guitar music.

I’ve been starting to look for booking agents to work with and that, to some degree, entails sort of—

Classifying, but also making it more difficult to work in more underground communities. One thing I’d be concerned about is making sure that the edges of what I’m doing don’t get sanded off just because I work with somebody who can help me play better shows and in more parts of the world than I’ve been able to do by myself. But I’m starting to get the sense that that would be the next logical step to “advance my career,” because this is definitely something I’m in for the long haul.

You played a lot of shows to support the record?

I had the record release show at the end of May at Constellation [in Chicago’s North Center neighborhood]. That was a really special night—surprising and crazy—and there was something kind of fun about coming back to a dorm [Granville-Grossman] at the end of it.

Then in the summer, I had a Metcalf Internship at the Renaissance Society. After that I flew home to Houston for a couple weeks, flew up for a couple days, and left on tour. I did it by bus and train, because I don’t drive. It was surprisingly pretty easy and surprisingly a lot of fun: 14 shows in 16 days. I got back exactly a week before school started.

This tour effectively funded recording sessions for the next record, which is probably going to have just three songs. The shortest songs are each going to be about eight to nine minutes long, and the longest song is going to be 22 minutes long or so. I might record one or two other things as well to see what fits, but I have a feeling that’s going to be it.

Do you plan to stay in Chicago after you graduate?

Completely. The music here is just too good. Chicago music feels interesting and special and good in ways that no other city could really match.

You’ve mentioned that you’re an anxious person. Do you feel like music helps you be less anxious?

Touring has changed my life in that regard. With this last tour under my belt, I feel a lot less ill at ease than I otherwise would. It’s been a lot easier to talk back to anxious thoughts.

Was that because you had to put yourself out there?

I think in part. Playing guitar also helped a lot in high school—playing guitar in particular as opposed to finding words to put into songs.