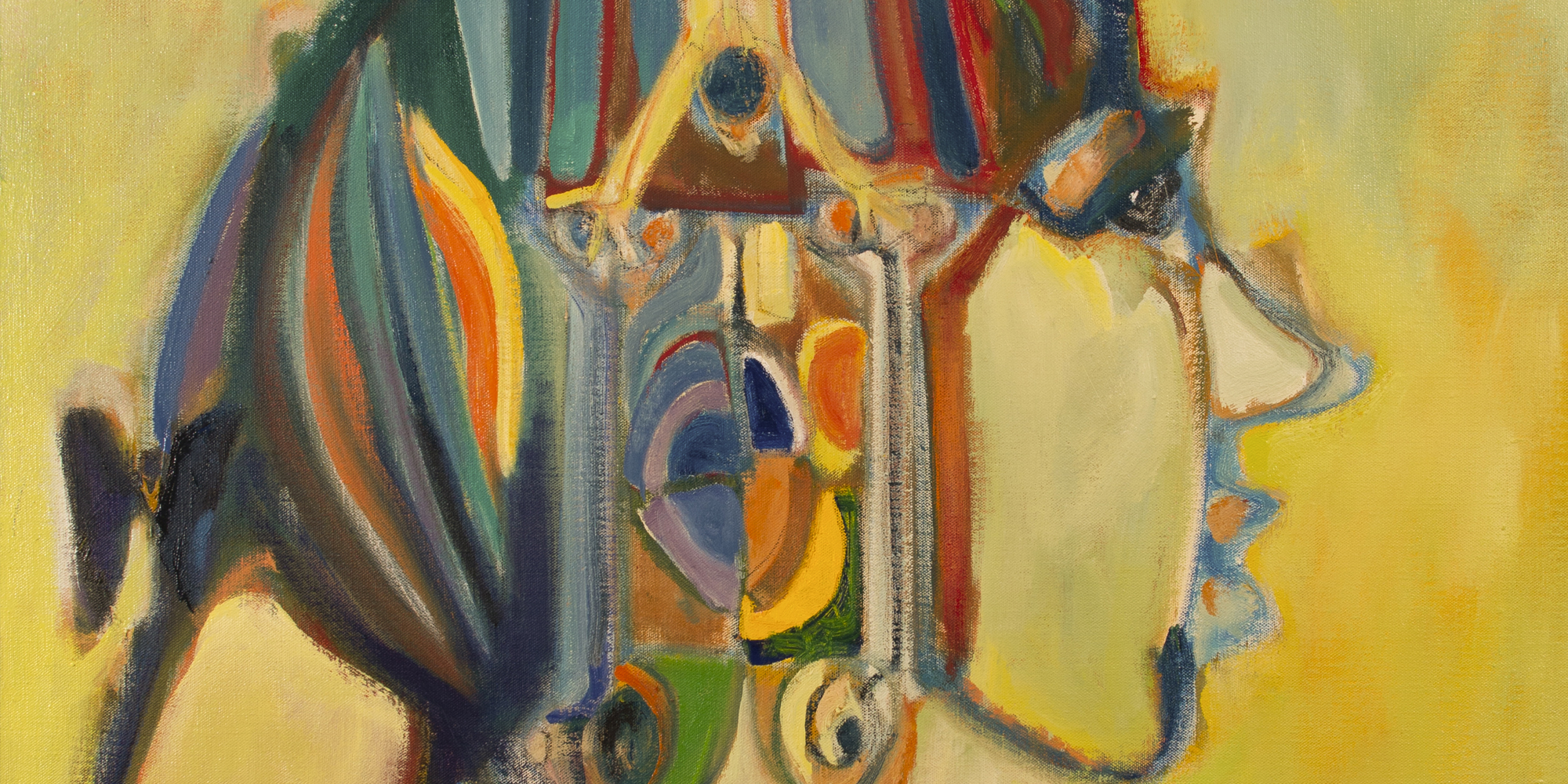 The bed, for artist John Ransom Phillips, is a fascinating place. In “this demarcated, somewhat isolated space,” as he describes it, extraordinary and ordinary things occur: “We’re born, we die, we make love. We dream. We eat. We’re sick. We give birth.”

Phillips, AB’60, PhD’66, depicts all these activities and more in his 2004 book Bed as Autobiography: A Visual Exploration of John Ransom Phillips (Clarissa Editions), a collection of paintings and writings. The paintings—mostly oil on canvas or watercolor, a few oil collage—have titles like My Conception, My Mother’s Bed, and Mourners at My Funeral.

The book opens with the essay “In Bed with John Ransom Phillips” by Wendy Doniger, the Mircea Eliade Distinguished Service Professor Emerita in the Divinity School and Phillips’s longtime friend and collaborator. Her 2000 book The Bedtrick: Tales of Sex and Masquerade (University of Chicago Press) is “very important to me,” Phillips says. She also contributed an essay to his 2009 book, A Contemporary Book of the Dead: Paintings on Papyrus (Clarissa Editions). Phillips’s bed paintings, Doniger writes, center on “the most intimate moments of losing the self and finding the self again.” The body in his paintings is elongated, often with arms and legs outstretched, and “always it has the face of a child … open, innocent, naïve, vulnerable.”

The faces remain childlike and innocent in Phillips’s most recent body of work—even though its subject is American presidents. Sleeping Presidents (BlackBook Publishing, 2021) was inspired by the Walt Whitman poem “The Sleepers,” in particular the lines, “I dream in my dream all the dreams of the other dreamers / And I become the other dreamers.” Each president, beginning with Donald Trump and ending with George Washington, has his own chapter, with paintings and a dream narrative. Trump’s chapter is subtitled “Small Is Big, Especially in Dreams.” Washington’s is “Dreaming the Afterlife.”

“I like to think that I became these presidents. I inhabited their dreams,” says Phillips. “Presidents notoriously are people who hide, veil.” But when someone is asleep and dreaming, “the mask comes off, the real person manifests.”

Phillips does not mean this metaphorically. He insists he is dreaming the dreams of long dead—or still living—presidents. (“And maybe he is. How do you know he isn’t?” Doniger points out.) As inspiration, Phillips cites William Blake, who claimed to have encountered Moses, Adam and Eve, and other biblical characters in visions; he then wrote poetry and made drawings about them.

Phillips is well aware that, as he puts it, “this is not something that people readily accept.” The very idea of dream invasion is uncomfortable. “The worst thing you could say about me, I guess, is that this is just highly imaginative historical fiction,” he says. “I hope that’s not true. I hope there is a truth that is given to certain people who are intuitive.”

Phillips grew up in San Francisco during the San Francisco Renaissance, when poets Robert Duncan and Jack Spicer—also inspired by Blake—were creating otherworldly work. Phillips was not part of that group, but “I’m enough of a Jungian to believe that maybe in some sense, the archetypes invaded my presence,” he says. In contrast, when he came to UChicago as an undergraduate in the late 1950s, he found the arts on campus were “undernourished.”

After graduation he studied painting at the San Francisco Art Institute; among his teachers was the painter Richard Diebenkorn, whom he remembers as both a visionary artist and a terrible teacher. But Phillips admired, and later imitated, Diebenkorn’s single-minded focus, “that ability to be his own person.”

Phillips then returned to Chicago, earning a PhD in the Committee on the History of Culture. His thesis centered on the political destruction of works of art, “something that you would find beyond reason. Why would anybody destroy something beautiful?”

He taught art history at UChicago, Reed College, and the University of California, Berkeley, until he realized he was turning into “a Sunday painter”—a hobbyist. He moved to New York in 1979 to focus on his creative work; he also makes films and writes plays.

His art history training is evident in the layers of meaning in his pieces, Doniger says: “They’re quoting poems, they’re quoting scriptures, they are making little jokes about famous paintings. … The more you know, the more you appreciate his paintings.” His work is in both museum and corporate collections; one painting, formerly exhibited at the Smart Museum of Art, hangs in Levi Hall.

To create Sleeping Presidents, Phillips focused on one president at a time, perusing his writings, reading biographies, and in some cases, visiting his house. While researching Theodore Roosevelt, for example, he toured Sagamore Hill, nicknamed the “summer White House,” on Long Island. After his visit, “I started to dream about it,” Phillips says. “I never sleepwalk. And yet, for several weeks, I was sleepwalking.” Roosevelt liked to portray himself as athletic and vigorous, Phillips notes; perhaps Roosevelt’s very physicality propelled him out of bed.

Not every president wanted to share his dreams. “Zachary Taylor preferred that his horse, Whitey, talk with me,” Phillips writes in the book’s introduction. First ladies occasionally wrested control: “Abigail Adams intruded frequently (as she did in life) when I dreamt her husband John’s dreams. Florence Harding took complete control of her husband Warren’s dreams while waiting to have her own.” The most evasive president was a relatively recent one: “Only Gerald Ford never let me in,” Phillips writes. “I suspect he did not dream.” In the book, Ford’s dreamlessness is represented by a blank page.

Like many people, Phillips had grand plans for 2020. Publication of Sleeping Presidents was originally scheduled for October, anticipating the election. There would be a book opening and exhibition at a space in SoHo, where five actors would portray five of the presidents, among them “somebody coming in with a horse. A man with a very tall black hat. A man with orange hair.” But with the shift to an online exhibition, Phillips was able to include Joe Biden. The paintings, all oil on linen and made in 2020, include Joe Biden Talking to Himselves and Joe Biden’s Victory Challenged by the Moon.

Phillips’s fascination with dreams, especially from an overtly Freudian perspective, is perhaps a little out of fashion—something he embraces. “Can I create a series of American presidents where I become them through their dreams?” Phillips says. “That’s not a question people ask today.”