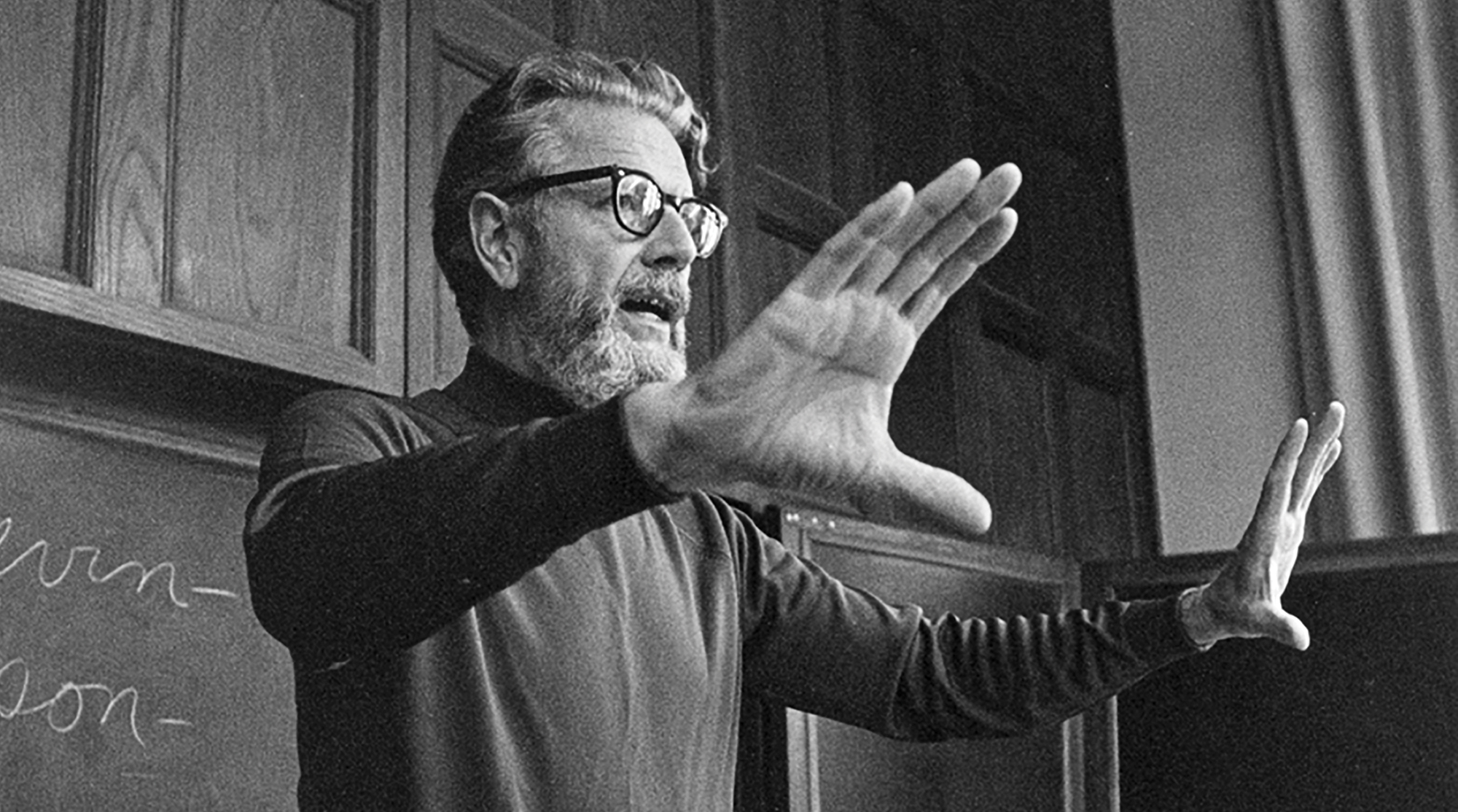 Wayne C. Booth’s books include The Rhetoric of Fiction (1961), Now Don’t Try to Reason with Me: Essays and Ironies from a Secular Age (1970), and For the Love of It: Amateuring and Its Rivals (1999). (UChicago Photographic Archive, University of Chicago Library)

Excerpted from “‘Now Don’t Try to Reason with Me’: Rhetoric Today, Left, Right, and Center,” originally published in the University of Chicago Magazine, November and December, 1967. Wayne C. Booth, AM’47, PhD’50 (1921–2005), then dean of the College and the George M. Pullman Professor of English, gave this talk to students as part of a 1966–67 series sponsored by Student Government.

When I first began teaching English, I saw myself taking up the weapons of reason against a world committed to emotionalism, illogical appeals, and rhetorical trickery—a world full of vicious advertisers and propagandists determined to corrupt the young minds I was determined to save.

Now, as a professor of rhetoric and dean of a liberal arts college, I may seem still to present myself in the same melodramatic light: the valiant champion of rationality against the forces of darkness.

Let me at least begin bravely, with a defense of reason that implies more clarity than I feel about how men ought to proceed when they set out to change each other’s minds. The defense begins with the claim that we are in a time of intellectual crisis, a time when confidence in reason is so low that most men no longer try to provide good reasons for what they believe. The very notion that such forms of proof are desirable, or even obtainable, is under scathing attack.

Everyone knows that journalism has been transformed in recent years, especially in the news magazines, right and left, from reportage into new forms of paralogical rhetoric: political argument disguised as dramatic reporting. It would be fun to spend the rest of my hour simply describing the new rhetorical devices, and the new twists on old devices, that Time magazine exhibits from week to week, all in the name of news. Mr. Ralph Ingersoll, former publisher of the magazine, has described the key to the magazine’s success as the discovery of how to turn news into fiction, giving each story its own literary form, with a beginning, a middle, and an end, regardless of whether the story thus invented matches the original event. “The way to tell a successful lie is to include enough truth in it to make it believable—and Time is the most successful liar of our time.”

Another good instance of this same kind of transformation of journalism into degraded rhetoric is the magazine Fact, a collection of shrill exposés, most of them with a touch of scandal and few of them providing enough solid evidence or argument. “A Psychoanalytical Study of Baseball,” “A Study of Wife-Swapping in California,” an argument that Goldwater (1) has been declared insane by thousands of psychiatrists (yet if you look closely at the evidence here it turns out to mean far less than the headlines claimed)—why, it’s as hard to read Fact as it is to read Time.

What I think I have been revealing here are a few examples of a world in which men show little esteem for logic, little respect for facts, no faith in anyone’s ability to use thought or discourse to arrive at improved judgments, commitments, and first principles.

My point is not to indict either the left or the right, but to plead for the very fragile twin values of honest inquiry and honest rhetoric. These values are under steady attack, both in theory and in practice, by men of both left and right—some of them presumably sincere, some of them no doubt knaves.

Wherever men find themselves too impatient to think together about their problems, wherever immediate action based on unity becomes more important than men’s determination to achieve genuine unity by discovering the truth together, my twin values disappear—often never to reappear. They always disappear in a major war. They disappear in any society whenever enough men decide that political victory is worth whatever it costs.

I would not want to suggest that my twin values are the supreme values for mankind, or that I would never be willing to risk them for other values. Though it is fairly easy to show historically that most revolutionary efforts work more harm than good, I can think of situations when I would want to stop talking and start overthrowing: Nazi Germany in 1940, say, or Boston in 1775.

Man was traditionally known as the rational animal; in that view reason was of man’s very essence. But it takes no great learning to remind us that much that we think of as distinctively human—love, poetry, martyrdom—can present itself in forms that seem to violate reason—or perhaps to transcend it. We can quote Pascal, who said that the heart can be turned on by reasons that reason cannot dig—or words to that effect. Tertullian is supposed to have said that he embraced his religious belief just because it was absurd. The young student who is impatient with the cautious weighings and probings and refusals of commitment that go on within every university is plainly in one great tradition of mistrust of reason that all of us must feel at one time or another.

Plato said that the worst fate that can befall a man is to become a misologist, a hater of reason; for him it was clear that since man is essentially reasonable, when he ceases to reason he ceases to be a man. I happen to believe this unfashionable doctrine. I also believe that when any society loses its capacity to debate its ends and means rationally, it ceases to be a society and becomes instead a mob, or pack, or a herd of creatures rather less noble than most animals. In America in recent years we have seen far too many of such herds—self-righteous fanatics who know without listening that the speaker is wrong. There are many of our universities, so-called, where Karl Marx, say, or Miss Aptheker (2) would be booed from the platform, even if the administration were to allow them to speak.

And on the other hand there have been some disturbing instances lately of left-wing students in first-class universities booing a speaker into silence. Whatever defenses may be offered for such rhetoric—the rhetoric of shouting a man down—it is not the rhetoric of a student. It is one mark of an honest man, as it should be the mark of an educated man, that he tries not to use a double standard in judging his friends and his enemies. Self-righteous bullying fanatics are self-righteous bullying fanatics, and they are as much a threat to the central values we defend when they bully on our side as when they bully on our enemy’s.

Our hold on reason is precarious; our institutions for giving it a chance are highly fragile. It would not really be surprising if 50 years from now no one in America will even know what I’m talking about tonight—such a transformation would not be greater than many that history has known. Men in that time would know something that most of you do not know—what it feels like never to be able to follow a thought where it might lead, openly, publicly.

Whether we move toward that genuine garrison state, that really total institutionalization of the mind, will depend in part, in very small but very real part, on how many of us here can manage—not in sermons like this, which are easy superficial substitutes for the day by day thinking that counts, but in our life as teachers and students—to reason together about what we care for most.

(1) Presidential candidate Barry Goldwater sued Fact magazine over its publication of a 1964 survey of psychiatrists in which half claimed he was mentally unfit to be president. Afterward the American Psychiatric Association issued the so-called Goldwater rule, forbidding psychiatrists from commenting on people they have not examined.

(2) Bettina Aptheker (b. 1944), political activist, radical feminist, then member of the Communist Party USA; now a distinguished professor at the University of California, Santa Cruz.