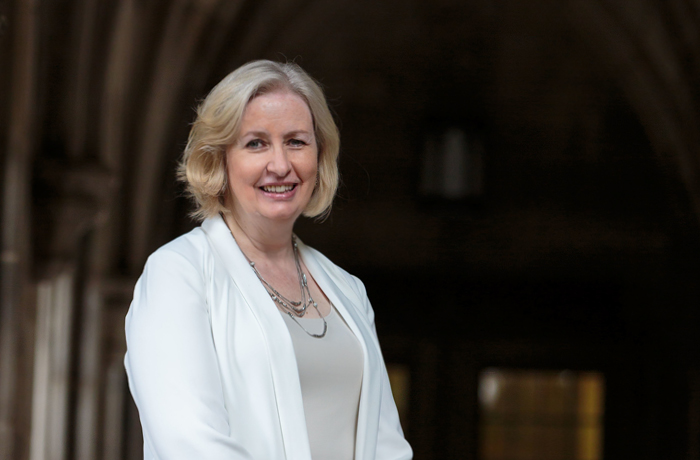 Robertson has spent more than 30 years on the faculty of the Division of the Humanities’ Music Department. (Photography by John Zich)

Dean Anne Walters Robertson on an exceptional time for the discipline.

Two years ago, when I became the dean of the Division of the Humanities, my perspective about the myriad roles of the humanities at the University of Chicago and in the world grew exponentially. From my bird’s-eye view, I can see that the work of our faculty, students, and alumni, as well as our outreach initiatives, is setting the agenda for transformative dialogue about the humanities in the world today.

In 1930 University of Chicago president Robert Maynard Hutchins encouraged disciplinary innovation by creating four graduate divisions at UChicago: the humanities and the three sciences—social, physical, and biological. Rather than install the more prevalent arts-and-sciences model that exists in most US universities combining graduate studies, he grouped disciplines based on how he imagined departments would most likely collaborate in their research.

To be sure, the 15 departments in the Division of the Humanities have cooperated extensively, but we also have collaborated across divisions through interdisciplinary organizations like the Franke Institute for the Humanities, the Neubauer Collegium for Culture and Society, and the Gray Center for Arts and Inquiry. During the past 30 years, we have also witnessed the birth of three new departments—visual arts, cinema and media studies, and comparative literature—developed through what were initially workshops and committees.

Through our research and teaching in the Division of the Humanities, we produce new interpretations of old subjects, adding to the heft of humanities scholarship through books and articles that often attract the recognition that Philippe Desan’s Montaigne: A Life received in 2017 from the New Yorker and the Wall Street Journal. Likewise, our creative endeavors have set the standard for originality and imagination, including Augusta Read Thomas’s Ear Taxi Festival, a six-day festival of new music; Christine Mehring’s celebration of the restoration of Wolf Vostell’s famous concrete car; and William Pope.L’s multisensory installation Claim (Whitney Version) at the Whitney Museum.

The Division of the Humanities leaves another kind of mark through public conversation: our faculty deliver scholarly papers in venues around the world each year. Notably, Martha Nussbaum presented the National Endowment for the Humanities’ Jefferson Lecture in 2017. We are also redrawing the traditional boundaries of the humanities through our collaborations with multiple new academic and artistic partners, including performers, computer scientists, chemists, physicists, and neuroscientists.

Likewise, the Humanities has made transformational contributions by fostering programs in cognitive science and digital studies of language, culture, and history, and by developing programs such as media arts and design and urban architecture. Realizing that the life of the mind must also preserve the life of the body, our division has enhanced prospects for humanities PhDs by preparing them for a challenging job market. We cultivate opportunities for them both within and beyond academe, enriching society with the kind of critical thinking and analysis that characterize our disciplines.

As the Division of the Humanities reaches outward in myriad ways, other fields are looking into the humanities. Books and articles written by specialists in nonhumanities subjects often recognize how an understanding of the humanities is essential to their projects. Christian Madsbjerg’s Sensemaking: The Power of the Humanities in the Age of the Algorithm and Gary Saul Morson and Morton Schapiro’s Cents and Sensibility: What Economics Can Learn from the Humanities both appeared in 2017. This past spring, former US Treasury secretary Robert E. Rubin published an op-ed in the New York Times titled “Philosophy Prepared Me for a Career in Finance and Government.”

As always, the division was keen to embrace these overtures. The Franke Institute hosts an Andrew W. Mellon Foundation–sponsored program called The Limits of the Numerical. Classics professor Alain Bresson recently made a fundamental contribution to economic history in his prize-winning book The Making of the Ancient Greek Economy: Institutions, Markets, and Growth in the City-States (2016).

In short, I believe this is an exceptional and pivotal time for the Division of the Humanities at UChicago, and I’m excited and motivated when I think about our immediate and long-term future. As the humanities play increasingly seminal roles in the academy and the world, we at UChicago will continue to lead the way.