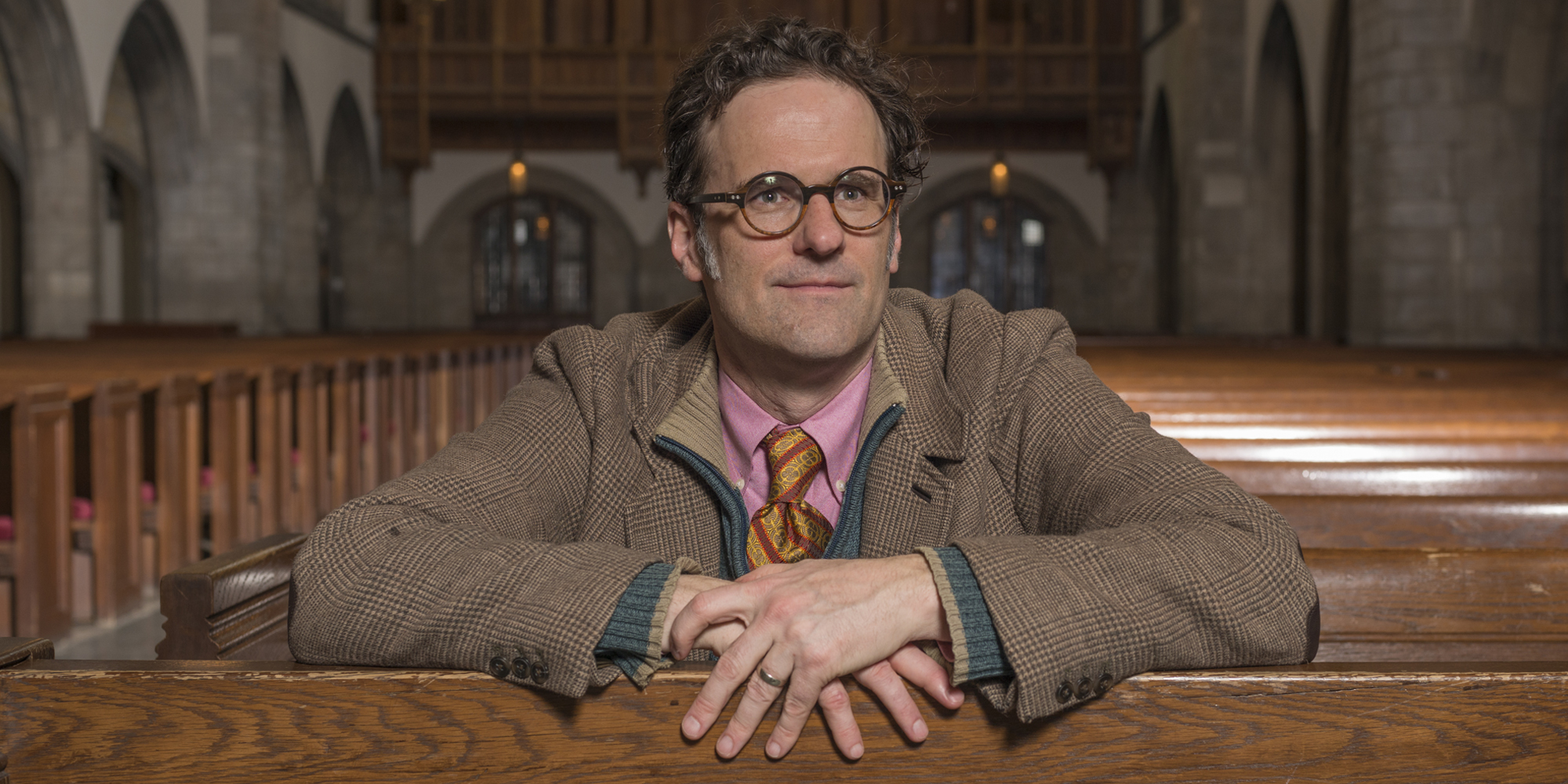 Lyrics for a band that doesnʼt exist

As a poet who writes about religious themes, “you’re hopelessly obscure,” says Peter O’Leary, AB’90 (English), AM’94, PhD’99 (Divinity School), a Catholic. “Poetry already is so obscure. How could I make myself more obscure?”

O’Leary, who teaches at UChicago and the School of the Art Institute, has published five books of poetry and five chapbooks. His most recent book is the essay collection Thick and Dazzling Darkness: Religious Poetry in a Secular Age (Columbia University Press, 2018), which argues for the importance of religious poetry in American literature.

How and when did you start writing poetry?

I was completely immersed, saturated, in progressive rock as a teenager. The two bands that were the most important to me were the Canadian power trio Rush and the British prog rock outfit Yes. I was basically writing lyrics for a band that didn’t exist.

Has religion always been a theme?

Why study at the Div School?

I had a very strong but unformed conviction about the need to heed the vocation of poetry. I needed an apprenticeship, but decided—for reasons that were similarly unformed—that I did not want to get a creative writing degree. The Divinity School seemed like a place I could do that.

I unexpectedly discovered there was a great deal more there for me. In addition to studying literature in this cryptoreligious sense, I just learned an incredible amount.

That most of poetry writing happens on your own. You can go to school to learn some stuff, you can have people that you love to talk to about poetry, but when it comes down to it, it’s you and the blank page.

The most important thing was he took me seriously. That letter initiated a correspondence that lasted five or six years until Johnson died. That period really constituted my initiation into poetry—I felt that my petition had been accepted. It was the most significant learning experience and probably creative experience of my life. [O’Leary is now Johnson’s literary executor.]

What is it like to write religious poetry in our time and culture?

I was recently telling Chicu Reddy [associate professor of English and creative writing] about a long poem I’m writing about astrology and the horoscope. He said, So it’s ironic? And I said no.

Any Renaissance scholar would have known his horoscope cold. That would have been one of the most complete ways of understanding your place in the cosmos. And Chicu said—he was being very sweet about it—“So you’re writing the most unfashionable possible poem you could write.” That basically has been my career.

So that’s one side, hopeless obscurity. But because of the nature of my work, I’ve had the chance to present it to nonacademic audiences. I’ve gone on church retreat weekends—I’ve been the invited poet. Most people love literature, and they love to talk about metaphor, especially when it comes to their faith lives.

Do you have any writing rituals?

I have a study, which I have not ironically named the Dynamic Core, after the part of your brain where the thalamus and the cerebral cortex communicate. It’s the thing from which consciousness springs.

I go in there and write every day in the morning. The simple rule is 15 minutes. You’d be surprised at how much you accumulate that way, but it always turns into more. I’ve been teaching myself Old English, so I study Old English for about a half hour, then write for a half hour, 45 minutes. A lot of note taking right now about astrology, but it counts.

About two years ago I discovered these notebooks made by this old manufacturer in Lisbon [Portugal] called Emilio Braga. They’re the perfect size. They have an excellent binding that opens flat.

The Palomino Blackwing, the 602, is one of the greatest pencils ever—[John] Steinbeck’s pencil. It’s got a motto, “Half the pressure, twice the speed,” embossed on the barrel, a very artful eraser and ferrule. I like to fetishize small precious objects. It’s really cheap if pencils are your thing.

A lot of young poets write on their phones, I’m told.

Poetry is one of the art forms whose technology has changed very little. We can do what we do almost anywhere. I strongly encourage my students to use little pocket notebooks. I don’t discourage them from using their phones, that’s fine. But I do want them to think a great deal about their process and to print things out.

Paper is so far the best data storage technology that humans have invented. If you have paper copies of your drafts, you can always go back. There may be a chunk of something you don’t use, but six months later, six years later, you’ll use it. It’s the compost pile midden heap.

In your most recent book, Thick and Dazzling Darkness, you write about having periods of religious doubt. Does that come into your work?

Not in any autobiographical sense. It does come into the work thematically in that I’m interested in bewilderment. Bewilderment is a crucial part of religious experience.

My experience is that faith is sometimes really intense and sometimes on a low flame. The thing that modifies that for me is participation in ritual. I’m a churchgoer. And for 20 years or so, I’ve had a daily prayer practice that involves recitation of the Jesus Prayer: “Lord Jesus Christ, have mercy on me.” You regulate your breathing connected to it, so it’s very similar to contemplative prayer practices in many other traditions.

There’s a J. D. Salinger short story about it.

Exactly: “Franny.” Like many people, that was my first encounter with that prayer. I love that story. It’s unimprovable.