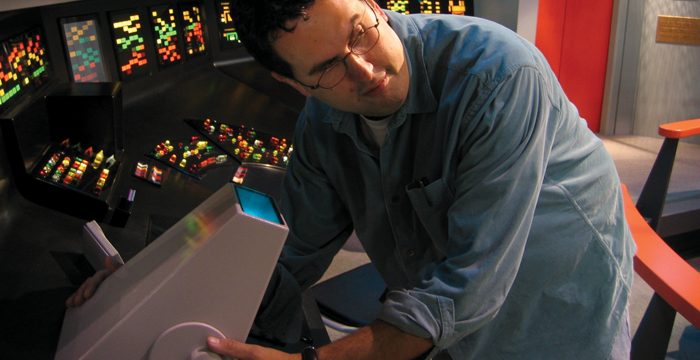 The pitfalls of writing, from a junior thesis to a Star Trek history.

By
Author
David A. Goodman, AB’84
|
The University of Chicago Magazine
—
Sept–Oct/12

In his essay “Fan Fictions: On Sherlock Holmes,” Michael Chabon describes how Sherlock Holmes fans (“Sherlockians” in America, “Holmesians” in the UK) created the model for modern fandom in their “scholarly” attempts, as Chabon puts it, to “fill in the blanks” in the stories.  Whether Conan Doyle created those blanks on purpose or through authorial carelessness (for instance, sometimes Watson had an old war wound in his shoulder, sometimes in his leg) has not mattered to the serious readers who, for the past 90 years, have attempted in essays and pastiches plausible explanations. “All enduring popular literature has this open-ended quality,” Chabon writes, “and extends this invitation to the reader to continue, on his or her own, with the adventure. … It spawns, without trying, a thousand sequels, diagrams, and Web sites.”

Star Trek fans (“Trekkies” if you’re not one of them, “Trekkers” if you are) make Sherlockians look like pikers. “Professional” fans (that is, those who get paid for their work) have written countless Star Trek novels, comic books, video games, and sequel television series. They are of course greatly outmatched by the work of the nonprofessional fans: there are as many Star Trek–related websites, chat rooms, fan fiction stories, and fan-produced episodes on the Internet as there is pornography. (There is also, unfortunately, Star Trek pornography.) Star Trek fans have an endless desire to “fill in the blanks.”

And I am one of those fans. This is not a secret to anyone I went to school with, worked with, or dated (that last category’s a very short list, which is probably not unrelated). It led to my chosen career: in high school I read The Making of “Star Trek,” which described the job of “television writer,” a profession that, up until that time, I didn’t know existed. So I was excited when the people who merchandise Star Trek called me last year and asked me to write a book: they wanted a coffee-table “history” of the Federation, the fictional future republic that serves as a backdrop to the adventures of the Starfleet who police the galaxy, with “historical” documents—treaties, constitutions, correspondence—interspersed to give it a feeling of authenticity. Since the show’s premiere in 1966, bits of Federation history have been dropped into the six television series and ten movies that followed. But the filmed adventures never required anyone to completely define this intergalactic civilization; my job would be to adhere to what had already been established while writing a narrative history that made sense. They wanted me to fill in the blanks.

Although I didn’t hesitate to say yes, I was nervous: I had never written a book, and I had a full-time job as the head writer on the soon-to-be canceled Allen Gregory. But a more important concern was my writing process, which I knew to be inefficient, immature, and painful. I’d want the final product to be perfect, but I knew there would be, as there always is in my work, a “Mrs. Gandhi.”

Back in 1983, I was a third-year at Chicago majoring in political science and was required to write a junior thesis. A little more relaxed than the yearlong senior thesis, it could be an already assigned final paper for a class in your major, with some extra work added to it. I had put it off all year. In the year’s final quarter I was in a class on political leadership, taught by Professor Lloyd Rudolph. The subject I chose in the final was, “Pick two of the leaders we’ve studied, and discuss how their relationship with their father helped shape their political ideology and leadership.” I told Professor Rudolph that I would pick three, and it would be my junior paper. I was excited to write this paper; I couldn’t wait to get started.

But I did wait—in fact I waited until the night before it was due. I sat down to write around 9 p.m., and by around 11:45 p.m. I had completed two of the three sections, the ones on Hitler and Mao. The third section was to be on Gandhi. I was getting edgy from all the coffee I’d been drinking since freshman year, and I was deep in panic because Professor Rudolph was an expert on Gandhi—he wrote the text we used. I was feeling resentful because other majors didn’t have a junior thesis. On top of my resentment was the fact I had written two examples, enough for the final grade in the class. I convinced myself that Professor Rudolph probably didn’t even remember that this was going to be my junior paper. “I’m done,” I said to myself. “I can just hand this in, then next year Professor Rudolph is going to be in India, and I’ll just tell the department head I wrote my junior thesis for Rudolph, and they won’t know, ’cause he’ll be in India.” My roommate, Bill Hanrahan, AB’86, overheard me talking to myself and pointed out the flaw in my plan: the department head would just call Rudolph, as they had phones in India. I had now wasted about two hours panicking instead of writing, and at 1:30 a.m. I forced myself to think about Gandhi.

I found in my notes something about a facet of Indian culture where, if you want to punish a loved one, give up something you love. (There is a corollary in my own culture, involving Jewish mothers and guilt.) Gandhi’s father died while Gandhi was having sex with his wife, and Gandhi became celibate as part of his new political philosophy. The theory I came up with was he gave up sex to punish his dead father for dying while he was doing the thing he loved most. I’m much prouder of the cleverness of my theory in hindsight than I was at the time I wrote it up. At 3 a.m. I was finished, except for the paper’s one reference to Gandhi’s wife. In that pre-Internet age, I couldn’t find her name in my notes or the text, so I gave up and typed “Mrs. Gandhi.” This mistake made me laugh when I wrote it, but I also knew that its seeming irreverence might be lost on Professor Rudolph. The potential for disaster grew in my mind, but I was too exhausted and too filled with self-loathing to get lost in another three-hour panic. To hell with it and this class and my college career, I thought. It’s going in. I don’t care anymore.

Sadly, every professional experience I’ve had as a writer follows this broad outline: the initial excitement; the waiting to start leading to the blind panic because I waited too long; the resentment toward those writers who I fantasize have it easier than I do; the ridiculous plans to try to get out of writing; facing the reality, usually with the help of a level-headed individual (Bill Hanrahan has been replaced by my wife), that it has to get done; the little mistakes that remain in the final product because I didn’t leave myself enough time; and, finally, hostility directed at myself, the script, and whomever I’m writing it for leading me to just turn the damn thing in. Eventually I look back on the work with pride, but I always wish I’d left myself more time. (For the record, I went through this same process writing this essay.)

The book is done—it comes out in November. I read it over last week. I am proud of it, but there are a couple of “Mrs. Gandhis” in it. I hope the Trekkers have the same attitude Professor Rudolph did. He crossed out “Mrs. Gandhi” and just wrote “Kasturba” over it. And gave me an A–.

David A. Goodman’s book Star Trek Federation: The First 150 Years (47North) comes out in November. His television credits include the Golden Girls, Star Trek: Enterprise, Futurama, and Family Guy, where he was head writer for six years.