On January 28, 2014, Tor Books published A Darkling Sea, the debut novel of James Cambias, AB’88. Cambias is a science fiction/fantasy writer and tabletop game designer. He has published numerous short stories and received nominations for the Nebula Award, the James Tiptree, Jr. Award, and the John W. Campbell Award for Best New Writer in 2001.

Cambias’ novel centers on a group of human scientists stationed in an underwater facility on Ilmatar, a remote moon that supports the intelligent, crustacean-like Ilmatarans. The humans’ attempts to gather information on the Ilmataran culture are complicated when the Sholen species intervene. There is a website at ilmatarmission.com which provides crew biographies and additional information about Ilmatar. The Magazine’s interview with Cambias is condensed and edited below.

The dynamic of three distinct populations was interesting, as many science fiction novels seem to focus on a war between two sides. Why include three? The very first original inspiration for the story was about Ilmatarans (or whatever I was calling them then) making their first expedition onto dry land. Then I put in humans, when I was thinking of it as a Star Trek story. Then I added the Sholen when I was inspired by reading about World War I in Africa. I suppose if Tor hadn’t bought the book when they did I would have kept adding more intelligent species. 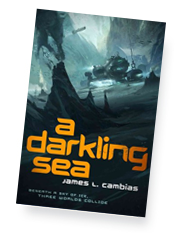 The fact that the Ilmatarans are blind is a reasonable evolutionary trait given that they live in the dark depths of the sea, but is there any larger purpose to having this fought-over alien species be blind, as opposed to the Sholen and human populations? I’d say it’s about 90 percent reasonable evolution and 10 percent thematic resonance. Of course beings in a lightless ocean will be blind—but one reason I was writing about a lightless ocean in the first place was to tell a story about beings discovering the existence of a larger universe they never could have seen for themselves. And of course there’s the irony that the sighted humans and Sholen are nevertheless “blinded” by their ideologies.

Your character Henri Kerlerec, a scientist at the underwater facility on Ilmatar, is hyperaware of potential publicity, a trait that causes him to cross into the Ilmatarans’ territory and eventually leads to his death. You call him a “scientific media star.” Is Kerlerec’s obsession with the media and desire to provoke a sensation just another aspect of his personality, or does this seek to imply something about the interaction of media and science?Well, Henri’s personality is of course his own, and there’s no reason why being a well-known scientist has to make one an ass. But, yes, I was poking a little at the “celebrification” of science nowadays. I don’t think it’s a bad thing when scientists like Stephen Hawking, Brian Greene, or Neil DeGrasse Tyson are as famous as athletes or pop singers; I think it’s great. But there is a persistent risk that individuals more interested in fame and fortune than science will seek to wrap themselves in the lab coat of scientific expertise and authority.

The role of language and the importance of communication seem to be a recurrent theme in the novel. Can you say a bit about your choices to foreground these elements?Actually, I didn’t. I completely hand-waved away the difficulty of communication. The humans and Ilmatarans learn to speak with each other with ridiculous ease. I didn’t want a story about learning to communicate.

What I did want to write about was how even with relatively clear communication, we can still misunderstand one another, especially when we project our own ideas of what the other side “really means” onto their statements. For real-life examples, turn on any political commentary nowadays.

At UChicago you majored in history, philosophy, and social studies of science and medicine (HiPSS). Do you think your academic experience has informed the way you approach your creative work?That’s a tough question, because I don’t know if my academic interests shaped my personality and methods or reflect them. I will say that my senior paper for my HiPSS degree, on Robert Hooke and the Royal Society, was definitely one of the inspirations for Broadtail and his club of scientific amateurs on Ilmatar.

Any particularly vivid memories about your Chicago years?Lots of them. A couple stand out in particular: going to see Dr. Chandrasekhar lecturing about Newton on the anniversary of Newton’s Principia; meeting Diane Kelly, AB’90, whom I married soon afterward; seeing the Regenstein’s copy of Copernicus’s De Revolutionibus with margin notes and strike-throughs by the Holy Office censors; and of course Harold’s.

Describe A Darkling Sea in one word. Science!