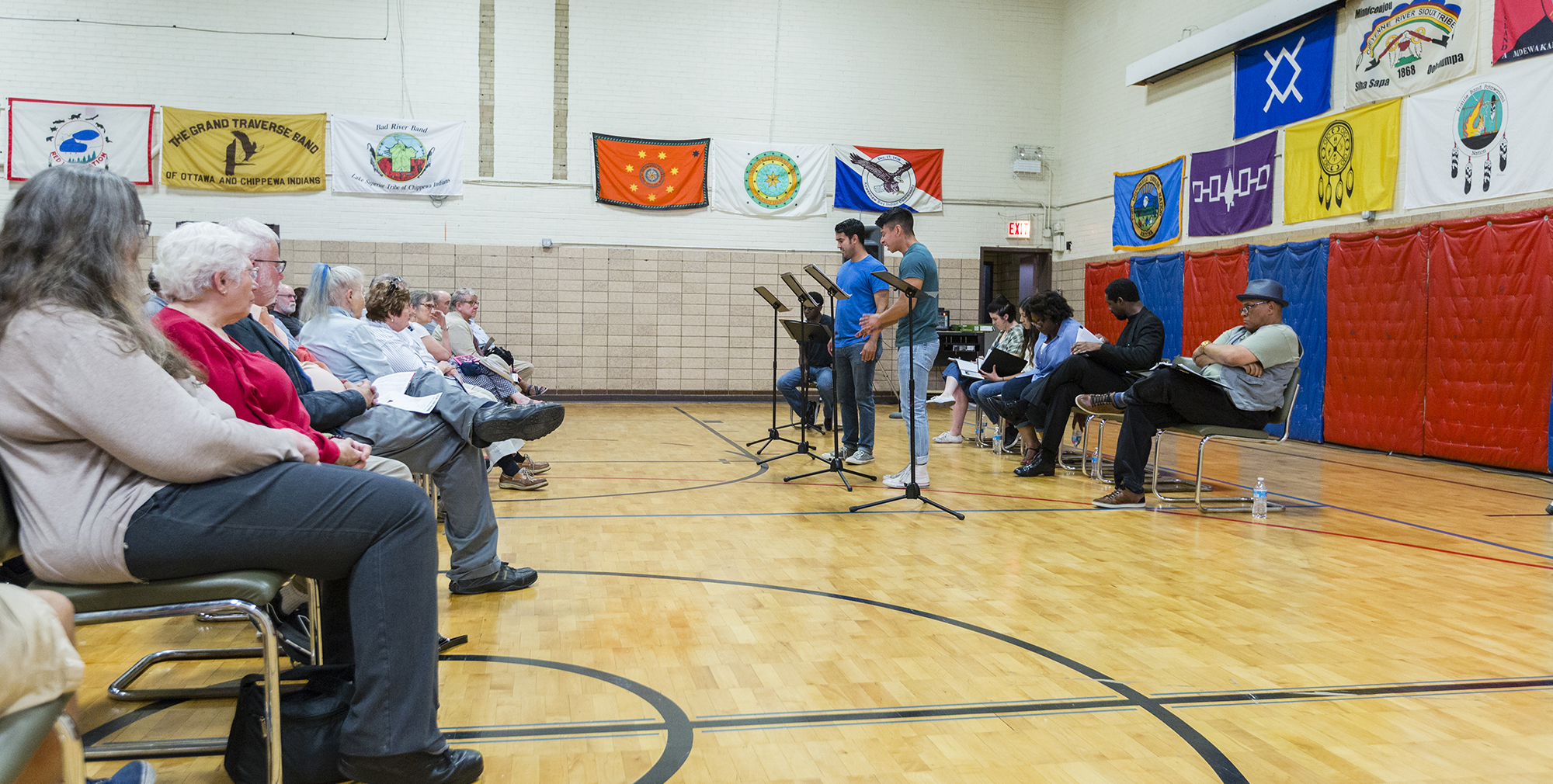 On July 23, Court Theatre’s Spotlight Reading Series staged a reading of the Native American drama The Independence of Eddie Rose to the American Indian Center in Albany Park. (Photography by Jake Newell)

It’s a Monday night, and a crowd of 89 sits silent in Albany Park’s American Indian Center. The actors have finished their last lines and are now nervously facing the audience, awaiting reactions to William S. Yellow Robe Jr.’s The Independence of Eddie Rose.

The silence lasts longer than usual. Eddie Rose, a play of familial love and trauma on a Native American reservation, was presented as a reading. Without props or scenery, the success of the show depended solely on the words of the playwright and what the actors have managed to make of them. If these tools haven’t proved convincing, there’s nothing else to fall back on.

The quiet persists. It’s taking the room a moment to understand the performance really is over. No longer observers, everyone has returned to their own lives, free to do whatever they’d like. The audience’s first act of independence? Give a standing ovation.

Such responses aren’t unusual for the Spotlight Reading Series, a Court Theatre program dedicated to expanding the theatrical canon to include more playwrights of color. “These were writers who had careers but didn’t meet the same heights of Arthur Miller,” explains Aaron Mays, Court’s community programs manager. The series’ goal is to “extend the stage so those voices can also have a place too, because there's room. There’s enough room for writers of different ethnicities,” Mays explains.

Spotlight values diversity in both authorship and outreach. In three years of operation, the program has visited eight Chicago neighborhoods, including Bronzeville, Woodlawn, and Albany Park. Each event provides free catering to audience members, but don’t expect food from outside neighborhoods to make an appearance. For Eddie Rose, a local Native American chef prepared a savory dish of beets and corn.

“You won't see something from Hyde Park within Bronzeville or something from downtown within Pilsen.” says Mays. “We always try to make sure that we work within the neighborhood to support it.” Community building is a primary goal of Spotlight. The series engages local businesses to help promote the performance and display advertising. By not charging money for tickets, it also works to remove economic barriers for those who might not normally have access to professional theater.

It’s been a successful strategy from the beginning. Blues for Mister Charlie—James Baldwin’s tragedy based on the murder of Emmett Till—was the first Spotlight production.“I think we had 150 people in attendance. ... That was the indicator to us that we were onto something,” says Mays, who has seen participation grow to over 400 people per year.

Spotlight receives funding from the Joyce Foundation. Though the original grant was allotted for three years, Court has just received a two-year extension that will allow the series to continue into 2020.

With the extra time, Mays plans to let the program keep doing what it does best: “Continue to expand access, or expand opportunities, for writers who are rarely seen on American stages.”