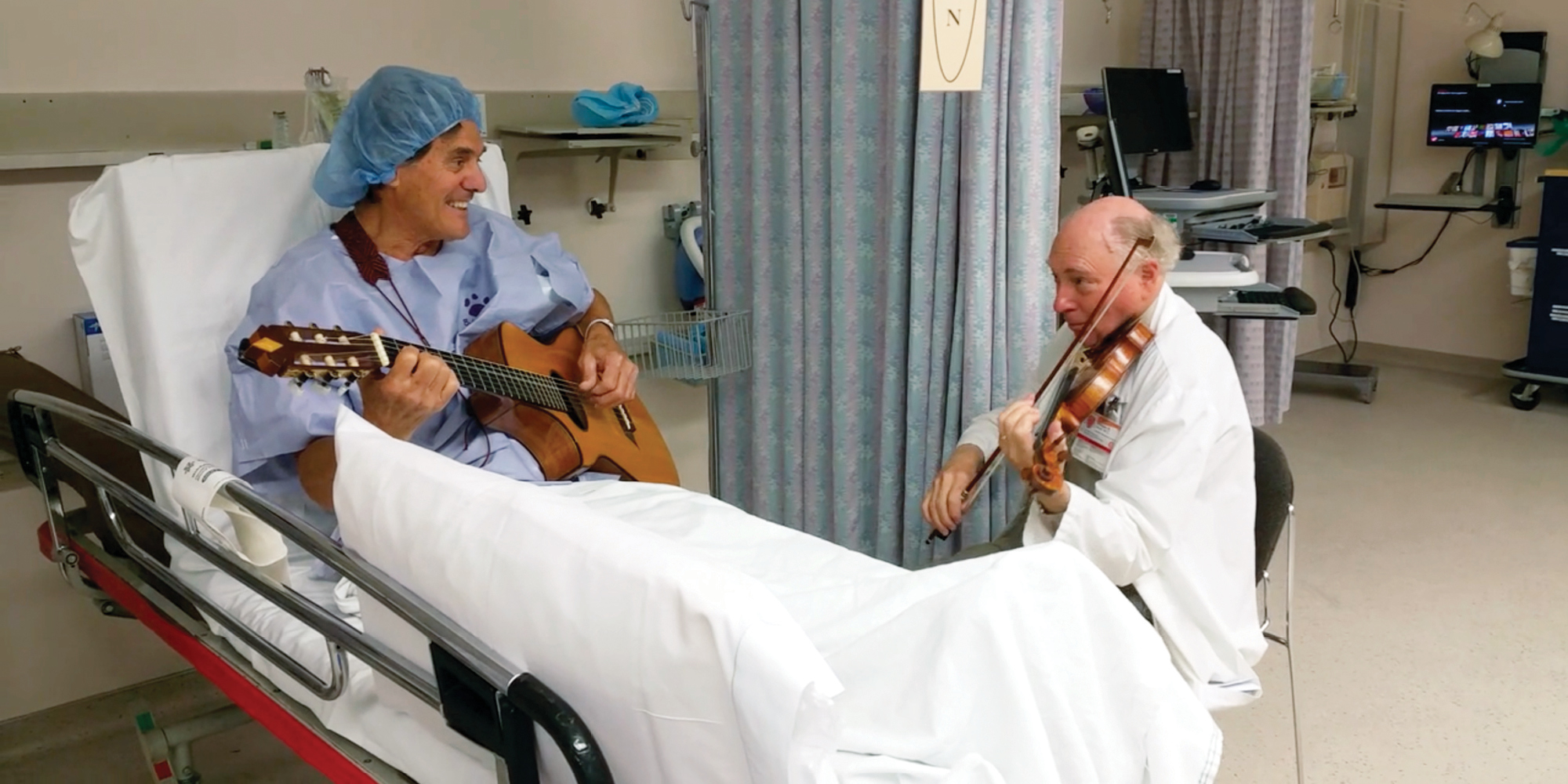 When this musician patient was nervous before surgery, Sloan helped him relax by suggesting they play a duet. (Video still courtesy Dignity Health Glendale Memorial Hospital and Health Center)

A physician’s second act as a violin maker

By
Author
Jessica Langlois
|
The University of Chicago Magazine
—
Winter/18

Every summer, 60 violin makers gather in Ohio for the Violin Society of America’s two-week Oberlin Violin Maker’s Workshop, often staying up until 11 p.m. bending maple for the curved ribs of the instrument’s body or chiseling fine grooves in its scroll.

It’s a who’s who of professional violin makers that attracts top craftspeople from around the world. The program rarely accepts amateurs, but one noteworthy exception—William Sloan, SB’63, MD’67—has attended the VSA/Oberlin workshop every year for the past decade.

“I get to go because if I don’t come, they don’t get to see a Stradivarius and a Guarnerius,” says Sloan, half joking, referring to his two 18th-century violins, made by Antonio Stradivari and Giuseppe Guarneri del Gesù in Cremona, Italy, during the golden age of violin making. He’s owned the two instruments since the 1980s.

But it’s Sloan’s special knowledge of old Italian instruments that makes him an asset to the group, says workshop director Christopher Germain.

Sloan, a urologist, has been an amateur violinist most of his life and a collector and enthusiast for decades. Now he’s also become a luthier, a maker of stringed instruments. He’s completed three violins and is working on a fourth.

Sloan, 76, still works part time at three Los Angeles hospitals, seeing patients three days a week and operating the other two. On evenings, weekends, and days off, he spends hours shaving fine European spruce and Bosnian maple for new instruments, playing with his bimonthly quartet, hosting musical events at his home, or traveling with his wife, Judy Beckner Sloan, AB’67, a trained singer and pianist, to give lectures on historical violins.

“Bill is somewhat like the old patrons of music from the 19th century,” says David Wilson, a professional musician who plays viola in the quartet with Sloan. “A patron, but also a participant.”

Sloan and Wilson sit in the music room of Sloan’s Los Angeles home with an array of instruments laid out in front of them—the great 1742 Guarneri and 1714 Stradivari, along with two of Sloan’s own handmade violins. He modeled both after the Guarneri—a “del Gesù,” the most prized of the Guarneri family’s violins.

In turn, Sloan plays “Ashokan Farewell” and Wilson plays “Lili Marleen” on Sloan’s Number 3 handmade violin, its back carved from a piece of wood that French bow maker Bernard Millant cut in 1960 and later gave to Sloan. The deep, rich strains fill the room.

“It’s the closest one I’ve ever made to an old violin,” says Sloan. He says many people have encouraged him to sell his handmade violins, but he’s not ready to part with them.

To compare the quality of the sound, Sloan hands the 1714 Stradivari to Wilson, who plays a Bach solo sonata.

“There’s a sort of sweetness to it,” says Sloan, who then passes Wilson the del Gesù. “Now this one is going to sound darker. It doesn’t have the sizzle.”

Later that night, Sonia Luna, who plays first violin in their quartet, describes the Stradivari as a Ferrari and the Guarneri as a Bentley. “The del Gesù is like buttah. It’s like smooth, rich toffee,” says Luna. “And the Strad is like a racehorse.”

Although they are highly valuable collector’s items, Sloan regularly lends out the Strad and del Gesù to professional musicians around the world. “The whole idea is they were made to be played,” says Sloan.

On a Sunday in November, he got a call from Roberto Cani, concert master and first violinist of the Los Angeles opera, asking if he could use the Strad in that afternoon’s performance of Verdi’s Nabucco. A few weeks later, Scott Yoo, the chief conductor of the Mexico City Philharmonic, flew to Los Angeles to borrow the same violin. Yoo was in a cab to the airport with the Strad at 1 p.m., and by 3 p.m. Sloan was in surgery.

Sloan began taking violin lessons in grammar school. He played first violin in his high school orchestra and in the University Symphony Orchestra. At UChicago, he also met his wife, Judy, who was studying music theory.

Years later, when Sloan was a urologist and transplant surgeon and Judy a law professor in Toledo, Ohio, and they sat on the city’s orchestra and opera boards, the couple began hosting local musicians on December 26 to play Handel’s Messiah. They’ve continued the Boxing Day tradition for the past four decades, filling their home with 30 to 40 musicians and 60 to 70 singers. The del Gesù and the Strad come out and the performers crowd together, shoulder to shoulder, around the Steinway grand. There’s no audience; the musicians play for one another.

It’s the type of evening Sloan cherishes—playing the violin alongside professionals, bringing people together, and filling his home with music.

This story was originally published in the Winter/18 print edition as “String Theory.”