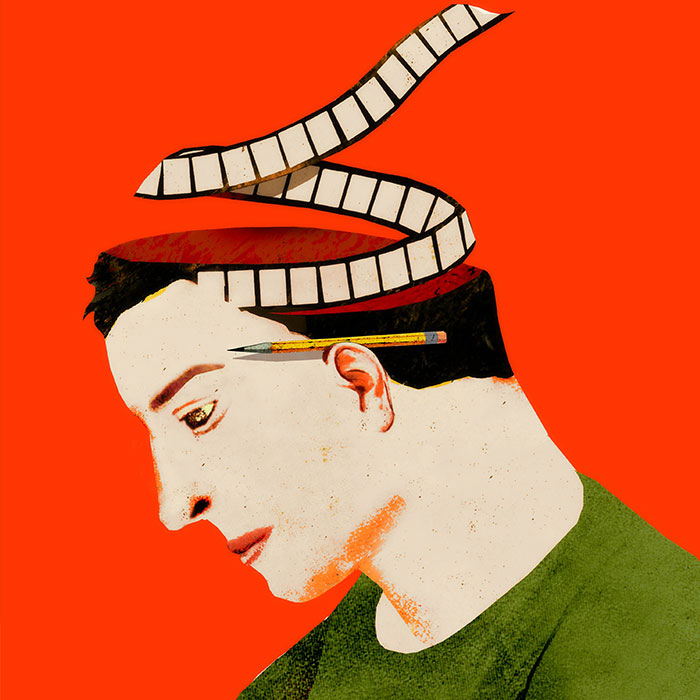 The steps to 55 Steps

When Mark Bruce Rosin, AB’68, visited mental hospital patients as a College student, it opened the doorway to his 2018 screenplay.

Early in my freshman year in 1964, a student in my Soc II class, Heather Tobis Booth, AB’67, AM’70, told me about a student organization, VISA, that visited patients at a psychiatric institution. The next Saturday, I joined her and other VISA members on the bus to Chicago State Hospital, where I was assigned to visit patients in the closed women’s ward.

I’d never been to a mental hospital before, nor, to the best of my knowledge, had I met anyone who had ever been a patient in one.

I remember stepping off the bus and following other students to the building that contained the closed women’s ward. I remember the unpleasant smell of the building and doors being unlocked and relocked by the hospital staff as we proceeded from one corridor to another. I remember walking past a room where, I inferred from the multiple showerheads, several patients showered at the same time. Some of the tiles were cracked, and the room was dingy and decrepit.

We were led to a large high-ceilinged, linoleum-tiled room, where women patients sat in chairs, mostly doing nothing. I don’t remember if there was a television, but there might have been.

A few memories are particularly vivid. The most intense are of a woman I used to talk with every Saturday, starting the first day I was there, and of a teenage girl who was admitted to the ward later in the year.

The woman was in her 60s. She had an Eastern European accent. She told me she was from Lithuania and that she had been a meat packer. She also said she had been married. She felt extremely isolated in the hospital, and I had the impression that her husband had divorced her or perhaps was still married to her but had abandoned her to the institution. I never asked her to clarify this because her former life was clearly a painful subject for her, and I didn’t want to cause her any more suffering. We student visitors were never told what the patients’ lives were like before entering the hospital or what their diagnoses were, so I had no idea why she was there. What I noticed about her was that she was always sad. Perhaps she had been institutionalized for depression.

The teenage girl who came into the closed ward that spring was 16 years old. She was outgoing, impulsive, and very energetic. I believe she might have had a mild intellectual disability. I gathered from her conversation with me and other VISA members that her parents had institutionalized her because she had allowed boys to become intimate with her, and they were afraid she would get pregnant. On subsequent Saturdays, I watched her deteriorate in hygiene, dress, and spirit. I felt that she did not belong there, that whatever her diagnosis, she should not be in a ward where she was at least 20 years younger than any other patient. I spoke to a nurse about it, but she said there was nothing she could do.

I also vividly remember the hospital staff going around with a tray of medication in tiny pleated paper cups, dispensing one to each patient. We student visitors never knew what kinds of pills were in the cups or how the nurses knew which cup to give to each patient. But many of the residents were so medicated that they seemed to be sleeping while awake.

When I returned to college for sophomore year, I didn’t resume my weekly visits to the hospital. I also gave up my former goal of becoming a psychiatrist. I changed my major from biology to that most practical of majors, English. I loved the literature courses I was taking, and reading was far more pleasant to me than inorganic chemistry—a requirement for premed.

It was a time of social activism on campus. I became involved in demonstrations opposing the Vietnam War. Instead of attending the official graduation ceremony in 1968, I participated in the anti–Vietnam War graduation ceremony in another building on campus, where we students wore black arm bands and Noam Chomsky gave the address. I graduated with the conviction that social activism on behalf of justice and human rights can help improve the world.

Twenty-four years later, in 1992, I was living in Los Angeles and working as a screenwriter. One day, listening to public radio while driving in LA’s endless traffic, I heard an interview with Jim Preis, executive director of Mental Health Advocacy Services in Los Angeles. He was telling the interviewer how fulfilling his job was. He’d started doing it while he was in law school, and was still working at the same organization years later because the work meant so much to him.

As I listened, I found myself immersed in memories of the closed women’s ward at Chicago State Hospital. I remembered the elderly woman from Lithuania and the teenage girl. I remembered patients sitting in the visiting room in a medicated stupor. Through the radio station, I got a phone number for Jim and arranged to meet him. When we got together, I asked him if there was a case he’d worked on for people with mental disabilities that might be the basis for an inspiring film.

Jim told me about Eleanor Riese, a woman diagnosed with chronic paranoid schizophrenia, who became the plaintiff in a lawsuit to improve the treatment of patients in psychiatric hospitals. He told me about her lawyers, Colette Hughes and Mort Cohen, who, like Eleanor, lived in the Bay Area. Jim had filed an amicus brief in the case. As he talked about the lawsuit, I knew I had to write a film about Eleanor, the remarkable woman at the center of it.

So began the process that led to my writing 55 Steps, which stars Hilary Swank as Colette, Helena Bonham Carter as Eleanor, and Jeffrey Tambor as Mort, and is directed by Bille August. My wife, Cynthia Hoppenfeld, has a featured role as Eleanor’s best friend, an older nun who shares Eleanor’s devout Catholic faith. When Cynthia read my completed screenplay all those years ago, she loved the role but was too young to play it; when the film was finally made, almost 25 years later, she was just the right age.

Eleanor Riese is a born protagonist, a woman whose life demands to be written about. In 1985, when she initiated her landmark human rights case to give involuntary, competent mental patients in nonemergency situations in California hospitals the right to informed consent to medication, she was 41 and had been on antipsychotic medications for years. Most of the time she lived on her own in an apartment where, following the tenets of her faith, she devoted herself to making rosaries for prisoners of conscience and to caring for homeless people in her neighborhood, providing them with toothbrushes, toothpaste, and the use of a bathroom. At times, she said, she would become overwhelmingly afraid and anxious, and would admit herself to a hospital. The experience that made her file the lawsuit occurred when, after one such occasion, the hospital staff wouldn’t listen when she told them that they were overmedicating her. Suffering many severe side effects of these medications, she wanted the hospital to respect her desire not to be given the drugs that she knew would hurt her and didn’t always help her. In her statements for the case, her insight into this is impressive; her eloquence is powerful.

Ultimately, what kept me working for so many years to get 55 Steps made was my respect for Eleanor and for her lawyers, Colette and Mort. I wanted to make the film to honor them and this important civil rights case.

The impetus to work all these years to tell this story began with my visits to Chicago State Hospital with the other students in VISA. It is an experience that never left me. Other experiences in the College, too, were indispensable. The ability to do the necessary research and to write the screenplay owe much to my time writing and editing at the Maroon and studying English lit. Four years of Doc

Films screenings deepened my engagement with film and my desire to tell stories through film. And directing plays for University Theatre honed my sense of what makes characters come alive on the page and what brings them to life in performance. One of those plays, presciently, was Middleton and Rowley’s Jacobean tragedy The Changeling, in which aristocrats indulge in the demeaning practice of going to a mental hospital to watch patients as an entertainment.

It was a thrilling day when, a week before starting to film in San Francisco, we had our first table reading of the script for Hilary and Helena. Hilary, Helena, Bille, and I sat at a table in a hotel room in Los Angeles, our scripts in front of us, pencils in hand, a pitcher of water, and four glasses. I’d never heard the lines I’d written for Eleanor and Colette read aloud, although I’d lived with them for so many years. Even in this reading, which was casual and meant to give the actresses an opportunity to discuss any lines they’d like me to polish, it was moving to see and hear them breathing life into their characters, interpreting lines in ways I hadn’t imagined, in ways that I loved. It was also moving to see the rapport they already seemed to be developing as collaborators. Everything I felt that day I’ve continued to feel since.

At the first prerelease screening of the film, the audience of 1,900 gave 55 Steps a standing ovation. As I rose from my seat to stand with them, I couldn’t stop smiling—all these people standing and applauding to pay tribute to Eleanor, Colette, and Mort.

After the screening, one woman thanked me for writing it. Several people told me they were excited about the theme of social activism for human rights, because it is so important in today’s world. I was especially moved by audience members who told me that through meeting Eleanor in the film, they realized that their past views of people with mental disabilities were far too limited and that Eleanor had opened their eyes.

Just as Cynthia and I were about to leave the theater, a woman came up to us to say that she had had psychiatric problems over the years and had been in institutions several times. She told us that Eleanor’s story was her story, and that she was so glad it had been told.

Mark Bruce Rosin, AB’68, is an author, editor, screenwriter, and producer. He dedicates this essay to the memory of Jim Preis, executive director of Mental Health Advocacy Services in Los Angeles, who died October 12, 2018.