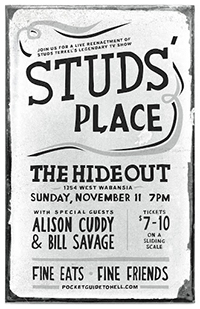 The final episode of the sitcom Studs’ Place, starring Studs Terkel, PhB’32, JD’34 (1912-2008), was broadcast in 1951. This year, as part of the yearlong celebration of the centenary of Terkel’s birth, Paul Durica, AM’06, decided to make a new episode. Durica is a grad student in English, an instructor in the creative writing program, and Chicago’s unofficial mad historian in residence. Anyone can come up with a loony idea—“I know! Let’s reenact the Haymarket riots!”—but only Durica would actually persuade a small crowd of Chicagoans to dress up in period costume and beat on each other with foam nightsticks. And so it was that last month, a standing-room-only crowd gathered in the back room of the Hideout, 1354 W. Wabansia, to watch a new episode of Studs’ Place. To simulate the effect of a live broadcast, the episode was performed in the front bar and projected in the back. Before the show began, the audience was asked not to get a drink or use the bathroom, for fear of walking into the set and ruining the effect. Everyone followed the rules. Like the original Studs’ Place, the new episode featured gentle, slow-paced humor and stock character types, and the actors improvised the dialogue based on a one-page scenario—but unlike the original, the story was set in 2012. The scenario, created by Durica: could the Hideout be the original Studs’ Place?
Arts & Humanities

Studs’ Place, a new episode of Studs Terkel’s old TV show, performed for a live audience at the Hideout on November 11, 2012.