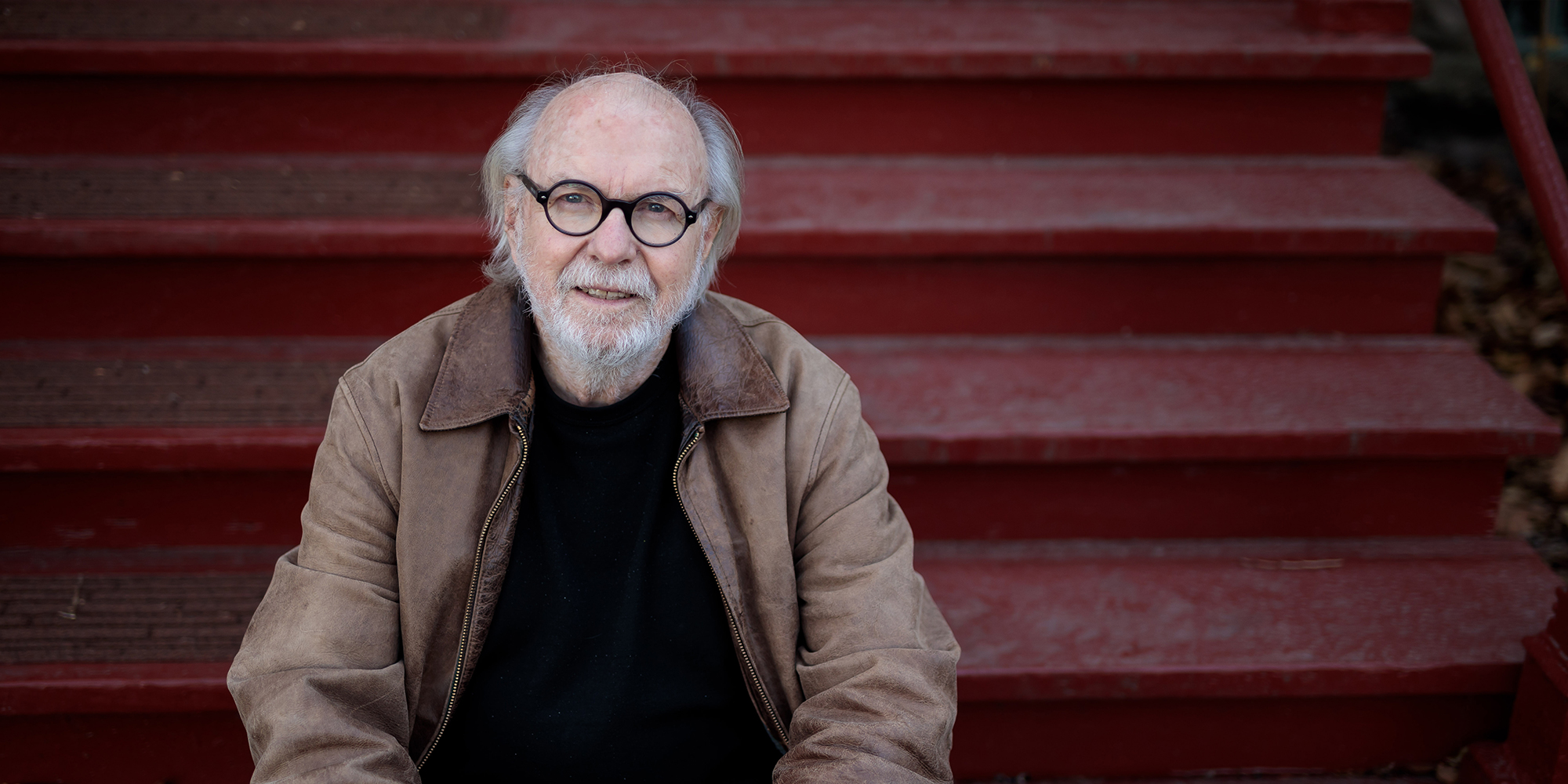 By
Author
Jeanie Chung
|
The University of Chicago Magazine
—
Winter/21

The year 2020 marked two milestones for W. J. T. Mitchell, the Gaylord Donnelley Distinguished Service Professor in English Language and Literature, Art History, and the College: he ended his 42-year tenure as editor of the interdisciplinary arts and humanities journal Critical Inquiry and published his first nonacademic book. That work, Mental Traveler: A Father, a Son, and a Journey through Schizophrenia (University of Chicago Press, 2020), is a memoir of his son Gabrielʼs 20-year battle with schizophrenia and subsequent death by suicide in 2012.

Mitchell was the second person to lead Critical Inquiry, taking over in 1978 upon the death of founding editor Sheldon Sacks, PhDʼ60, professor of English and linguistics. The journalʼs influence grew steadily under his watch; 25 years later, the New York Times called it “academeʼs most prestigious theory journal.”

As a scholar, Mitchell has ranged freely over English literature, the visual arts, and popular culture. Two of his books, both on visual culture and theory, were awarded the University of Chicago Pressʼs Gordon J. Laing Prize for the faculty book published during the previous three years that “brings the Press the greatest distinction”: Picture Theory: Essays on Verbal and Visual Representation (1994) and What Do Pictures Want? The Lives and Loves of Images (2005). Other works examine William Blake, English landscape painting, and the dinosaur as a cultural icon.

Mitchell spoke to the Magazine in November about editing Critical Inquiry, writing about Gabriel, and more.

You really shaped Critical Inquiry from what it started as—focused on the Chicago school of literary criticism—to what it became.

Shelly Sacks handed the journal off to me, basically. In a way, he empowered me. He said, “We have bigger ambitions. We want to be the journal of record for advanced theory in the humanities and the social sciences.”

It was an easy transition, to aim higher and more broadly. One policy I initiated was to try to be sure that we were always bringing on the younger generation as coeditors. I wanted the journal to reflect the new and the fresh at all times.

Within the first two years, Elizabeth Abel, an untenured assistant professor [now a professor at the University of California, Berkeley], said to me, “I want to edit the first issue of the new feminist criticism.” Iʼll never forget our editorial meetings. I was still young, but [professors of English] Wayne Booth, AMʼ47, PhDʼ50, and Bob Streeter were not. We had these wonderful discussions saying, “This is a new kind of criticism. It has a politics that goes with it. We canʼt think about it in the same way we thought about old-
fashioned articles on Samuel Johnson and rhetoric.”

Elizabeth set the pattern for both new and young ideas coming in and for adjusting our criteria accordingly—really thinking about our own methods of assessment.

It seems like everybody was published there. You had Henry Louis Gates Jr., Jacques Derrida, Elaine Showalter, obviously people from UChicago. Anyone you wanted to get but didnʼt?

We had a chance to get Michel de Certeau, a French theorist who was studying space. Iʼve taught his work often. I loved his work. Early on, somebody had translated a piece of his. At that time, in the late ʼ70s, I didnʼt know who de Certeau was. The translation was a mess. It was not in English yet. If Iʼd been a little more hip, a little more alert, I wouldʼve said yes. But we didnʼt have anybody who was reading firsthand French theory and criticism. So we turned it down. And within months—“What? You turned down de Certeau? Why?” I said, “Because weʼre stupid.”

What made you decide to step down as editor?

It was time to let the younger people on the journal run it—particularly my English department colleagues Bill Brown and Frances Ferguson, whoʼve taken over as a duo.

Iʼm on leave this year. I have so many writing projects, and at my age you donʼt have forever. The minute I said Iʼm going to take at least a year away from being in the editorial meetings, like I take a year away from teaching, it just felt so right.

Tell us about your writing projects.

The one thatʼs on the front burner is a history of the present called “Present Tense 2020.” It started in 2016 with an essay I wrote entitled “American Psychosis: Trump and the Nightmare of History.” In 2018 I added another segment to it around the election of that year—all the anxieties leading up to it, because how could you trust polls anymore?

Then when the pandemic hit, this added another layer that I have to take account of. Then the murder of George Floyd. So this condensation of political insanity, embodied by Trumpism, the pandemic, and then the eruption of enormous mass demonstrations all over the world in response to George Floyd struck me as, I have to do something to tell this story I had already begun in 2016. Now Iʼm trying to pull it all together.

And then thereʼs Mental Traveler, which is quite different from Critical Inquiry and your other writing: you couldnʼt have any analytical distance here, even if you wanted to.

No. Just to decide to write it, to divulge all of these intimate things, I had to first overcome my own sense of self-censorship. Do I want to really expose myself? My son? Our family? I can tell you thereʼs a lot that had to be deleted from the book.

How did you settle on the structure, which is roughly chronological but also thematic, with chapters on Gabeʼs treatment, his art, and the misconception that mental illness can be overcome by force of will?

With numerous rewritings. I hate to think what the first draft looked like. It was completely chaotic. All I did was pour out scenes, episodes, anecdotes. One of the things that I think was consistent in all these stories was how, when youʼre dealing with somebody who is suffering from schizophrenia or other mental illnesses, itʼs not all one thing. All these episodes tried to show that. You could go through a cycle of humor, tears, laughter, surprise, disappointment—in a half hour.

Then I had a whole series of great readers. My wife, of course, and my daughter both read it numerous times and gave me great feedback. A crucial intervention was made by [lecturer] Bill Ayers, who was part of the story. He was like Gabeʼs favorite uncle and our next-door neighbor. So he read it, and Bill is quite a gifted writer. He said, “I love these stories youʼre telling about Gabe. They really bring him alive. But I think you need to think of yourself more like a storyteller and give it some color, fill it in with detail.”

Part of the initial motive for it was just to try to figure out what this all meant. Bill was one reader who made clear to me that was not going to happen. He said, “Tell this story. Thatʼs all.”

My next reader was Rachel DeWoskin in Creative Writing, who is Billʼs daughter-in-law. She said, “Itʼs all here. I just think you need to change the order of things, to get your reader prepared. You have to think of yourself like a novelist.”

This was a whole retraining. Iʼm a literary scholar and theorist. I havenʼt been a storyteller very much. It was like moving pieces around on a chessboard.

[English professor] Lauren Berlant inspired the last chapter, “On the Case of Gabriel Mitchell.” Lauren has a way of asking crucial, simple questions that you canʼt stop thinking about. She said, “Why do you want to make a case of Gabriel?” And I said, “Is that what Iʼm doing? I guess I do. Why am I treating him as a case thatʼs worth pondering? Is a case a way of diminishing him, or getting control of it?” It was very important for me to think about that. So I wrote it with a lot of help from my friends.

What has been the response to the book? This is a different audience than for the other books youʼve written.

More people who read fiction, nonfiction, memoirs. One of my best readings was with NAMI, the National Alliance on Mental Illness. It was an audience with a lot of parents of kids, siblings, relatives who have a mental illness.

I focused on the chapter “The Immoral Career of the Caregiver.” Because thatʼs where the NAMI people will recognize their own stories: the impossible contradictions when youʼre dealing with a loved one who is mentally ill. How to talk to them. How to get them help. How to take care of them, but also not have them feel smothered by you—or abandoned. Itʼs a knife edge.

Why did you decide to publish it now?

It was going to be the introduction to a longer, more scholarly book called Seeing through Madness. I had submitted the introductory memoir and a 300-page manuscript of chapters about film, history, literature. UChicago Press had accepted it. But then I began tinkering with the introduction, the biographical part, and it just took over.

At some point my editor at the press, Alan Thomas, said, “You realize your preface is a different book? Itʼs really about Gabe,” whom Alan knew. I said, “Can I split the two?” He said, “Yes, and I think itʼd be better for both.”

Seeing through Madness is a project Gabe launched me on. He wanted to make a film called Histoire de la folie, the history of madness. It was going to be based on Jean-Luc Godardʼs eight-part Histoire(s) du cinéma (1989–99). Gabriel wanted to go to every part of the globe and gather up all the figures of madness. He said, “Dad, youʼre going to be my image researcher, because thatʼs what you do.”

He wanted to turn madness from an affliction into a critical perspective. He said the idea that man is a rational animal—weʼve clearly disproven that zillions of times. So letʼs think about man as the crazy animal and see what we can make of that. This is the way he approached his own illness. He said, “I want to make schizophrenia into a learning experience.” Tough job. But he was serious about it, and I think he made progress. Who knows where he couldʼve gone with it?

Has your experience with Gabe changed the way you relate to College students?

Absolutely. Itʼs made me feel as a teacher, even more than I ever did before, how important it is just to listen to students. Be emotionally present, intellectually present.

Mental illness is very widespread as an issue. And this school puts a lot of mental pressure on the students. Itʼs crucial to find out where they are in their intellectual, emotional development.

Of course you have to make demands. Thereʼs got to be some homework. You have to actually read the material. Iʼve never found much of a problem with that. The big thing is when they feel like theyʼve got to produce something out of it, what sorts of possibilities do you open for them so they donʼt feel totally blocked, intimidated?

One of the nice things about the University of Chicago from a teacherʼs standpoint is that our students are intellectually competitive. They really want to become smarter, but it can be stressful on them too.