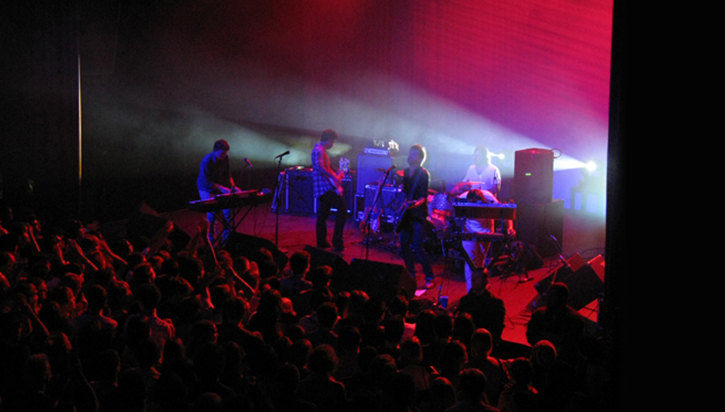 Hadji Bakara, PhD’16, says he’s still close with the other members of Wolf Parade. The band is back on tour this summer, while Bakara joins the University of Michigan faculty. (Photography by rawkblog4, CC BY 2.0)

For Hadji Bakara, a former member of the band Wolf Parade, a successful music career “kind of just happened.” With his savings from summers spent planting trees in British Columbia, Bakara, PhD’16, bought a modular synthesizer and joined a band. He spent his 20s playing shows around the world, touring with Modest Mouse and running Turbo Crunk, the Montreal party where key figures from the influential UK record label LuckyMe played some of their first North American DJ sets.

But in time, the charms of tour life wore thin—and in 2008 Bakara realized that living fully meant trading the concert hall for the lecture hall. “I always wanted to be an academic. I was basically just going to go on one tour. And then five years later, I was still in the band,” he recalls.

Nearly a decade after Bakara left the stage to pursue a PhD in English Language and Literature at Chicago, he and his former bandmates are starting a new chapter. Wolf Parade has returned from a five-year hiatus to record a new album, Cry Cry Cry, and open for several of Arcade Fire’s tour dates, and Bakara will be starting as an assistant professor at the University of Michigan in the fall.

Bakara’s comments below have been condensed and edited.

How did you join Wolf Parade in the first place?

They were my old friends from British Columbia. At the time, I was playing more experimental synthesizer stuff—I had a modular synthesizer and some theremins, and I was doing music mostly as live soundtracks for theater at McGill—before they asked me to join around the end of my undergrad. It was going to be temporary, but then it turned into something sort of permanent. There was a lot of attention and momentum, and we got signed right away to Sub Pop Records.

Why did you leave Wolf Parade?

Once we started touring on a bus and playing really big venues, I think all of us kind of lost interest. I just wanted out really bad. I was depressed because I was getting farther and farther away from what I wanted, and everyone else in the band was achieving what they wanted: to be in a successful, recognized, critically lauded band. But I was still as far away from doing my PhD as I was when I first joined the band.

I really loved playing, but I didn’t really like touring, I didn’t like living on a bus because I’m a bit of a homebody, and I like my books, and I like peace and space to read and write.

But the band is still totally like brothers to me.

Was it scary to leave such a successful act?

No, not at all. In a lot of ways, I had lived through the best times, when it was new and fun and fresh—and then it had gotten to the point for all of us where it was sort of stale.

It was fortunate because I was able to come to Chicago and start a graduate career and know that the grass wasn’t greener on the other side. A lot of graduate students come straight out of undergrad, haven’t done anything else in their lives, and then find themselves in Hyde Park forced to do the intense work of a graduate student. And what they really want to be doing is going on road trips and drinking and being a 20-year-old.

I had done that for basically eight years, so I was more than happy to just sit in a room and read. It was actually all I wanted.

So, speaking of Canadian bands on tour—you played synthesizer on the 2007 Arcade Fire album Neon Bible, which was nominated for a Grammy in 2007. How did that collaboration come about?

Wolf Parade and Arcade Fire started in the same studio. Those guys were good friends of ours—Win [Butler, of Arcade Fire] and I had gone to McGill together and became friends through sharing a studio and playing a lot together.

They were making Neon Bible with a guy called Markus Dravs, this really rad German producer who had produced Homogenic [by Björk]. He started to tell me how the band needed to make the sound of a crackling sign, so I went out to the studio with my synthesizers. It was just me and Markus and Win messing around and trying to come up with the sound of a crackling neon sign.

What are your academic interests?

I wrote my dissertation on the literary history of human rights in the 20th century. Each of the chapters is on a figure: one is on the refugee, one is on the prisoner, one is on the dissident, one is on the witness, and one is on the legislator. I’m now adapting that into a book. I worked between history and English and worked a lot at the Pozen Center for Human Rights—I taught and worked on the core curriculum there. It was kind of my academic home while I was at Chicago.

I taught a course at Chicago last fall called The Literature of the Refugee, which was a really successful and illuminating class for me. And I’m starting to teach speculative fiction more—like Octavia Butler and Ursula Le Guin. Trying to teach books that use the future as a canvas for projecting ideal or dystopian societies and seeing how ideas about human rights—or human rights abuses––are being worked through.

Can you tell me more about your book?

The book is an expansion and refinement of my dissertation. I don’t write on individual authors, so most of my chapters have 10 or 12 or 15 writers in them. It’s not really traditional literary criticism where each chapter is on a book or a writer. I’ve been working a lot on the refugee, because it’s such a part of the air we breathe.

It’s been really challenging, as well as invigorating and fulfilling, to try and break away from literary criticism’s focus on the case study—to do literary history that’s attendant to textuality while also keeping this macro lens sustained.

I was always surprised that my advisers let me do it. On many occasions I went to Deborah Nelson and asked, “Are you sure I should be doing this?” I don’t think I’d be able to write my dissertation anywhere else, but I was able to do it at Chicago.