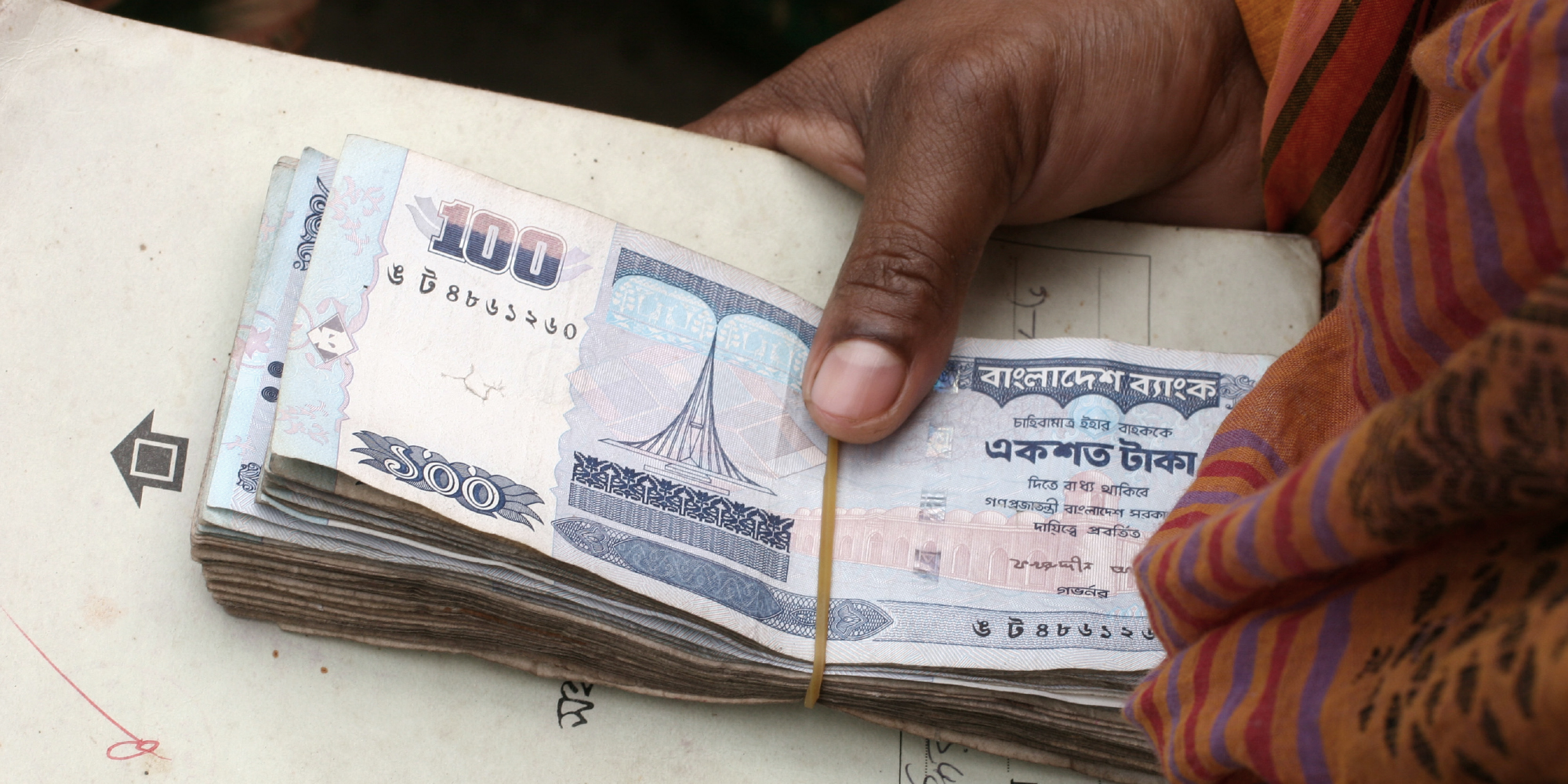 A Grameen Bank borrower presents her loan repayment. Microlenders like Grameen were once seen as a global poverty panacea, but, as Elizabeth Chatterjee’s course reveals, it wasn’t so simple. (odong/UIG / Universal Images Group/Newscom)

One hundred years of global aid

A course tackles the history of efforts to do good abroad.

Not so very long ago, microfinance was going to save the world.

In his lecture accepting the 2006 Nobel Peace Prize, Muhammad Yunus—the founder of Grameen Bank, which provides very small loans to Bangladesh’s rural poor—foresaw a world where social enterprises like his had ended poverty once and for all. “I firmly believe that we can create a poverty-free world if we collectively believe in it,” Yunus said.

But it wasn’t that simple, Elizabeth Chatterjee tells the roughly 40 students in her Autumn Quarter class on the history of international development, held in-person and masked in a Harper Memorial Library classroom. In the 15 years since Yunus received the Nobel Prize, microfinance has attracted criticism for trapping borrowers in never-ending cycles of debt. Banks like Grameen are still around, but some of the shine has come off, Chatterjee says: “Microfinance has peaked and begun to fall.”

Stories like this abound in Chatterjee’s course, the eye-catchingly titled How (Not) to Save the World: The History of International Development. The class, according to its syllabus, “introduces students to the theories, actors, and practices that have shaped international development”—and shows how, in many cases, those theories, actors, and practices have faltered.

For Chatterjee, an assistant professor of history whose PhD is in development studies, the course fills an important gap. “One thing that international development has often lacked is this sense of its own history,” she explains in an interview a few days after class. A century’s worth of interventions have sought to end poverty and improve health, and students can learn from those successes and failures.So far—it’s week eight of 10—the course has “succeeded beyond my wildest dreams,” Chatterjee says. In their discussions of topics including imperialism, population control, and global hunger, students have found what she views as “a sweet spot”: healthy skepticism paired with transnational empathy.

Both empathy and skepticism are on full display throughout today’s session, which focuses on philanthrocapitalism—the melding of philanthropy and big business. The day’s readings and discussions cover the Rockefeller Foundation and the Bill and Melinda Gates Foundation; social enterprises (companies that seek to “do well by doing good,” as the popular axiom goes); and microlenders.

After a mini lecture on the origins of philanthrocapitalism, Chatterjee starts with a broad question to get the class talking: Do they see more similarities or differences between the Rockefeller Foundation at its founding and the Gates Foundation today? The discussion ping-pongs back and forth.

Similarities: in the views of both John D. Rockefeller and Bill Gates, one student notes, business experience is interchangeable with other kinds of expertise. Differences: the early 20th-century Rockefeller Foundation, another observes, was more intertwined with governments and international bodies than the Gates Foundation is today.

“You’re totally right,” Chatterjee responds. “The Rockefeller Foundation is so old that it has a symbiotic relationship with international organizations and state bodies that Birn” (Anne-Emanuelle Birn, the author of one of the day’s readings) “suggests kind of grow up around it.” The Gates Foundation, by contrast, “is coming into a much, much more crowded field.”

But, Chatterjee says, shifting back into lecture mode, there’s more to philanthrocapitalism than large foundations: “There’s also a version ... that is much more grassroots.” Think of companies offering water purification powders and solar lanterns—solutions that are cheap to manufacture and easy to implement. “You don’t need big investments in infrastructure and things like electricity or clean water,” Chatterjee says. “It’s kind of an end run around that.”

The downside is that when companies introduce quick-fix solutions that don’t require infrastructural improvements, they may prevent those improvements from happening at all. In other cases, companies simply overpromise: one theory behind solar lanterns is that people will use their newfound access to nighttime light for study or work, thereby lifting themselves out of poverty. In practice, it rarely plays out so tidily.

Muhammad Yunus and advocates of microfinance made similarly bold promises. In his Nobel Prize lecture—one of the day’s assigned readings—Yunus outlined how even extremely small loans would allow borrowers to start businesses and generate new income to put toward educating their children, allowing the family to break the cycle of poverty.

At Yunus’s Grameen Bank and many other microfinance institutions, breaking the cycle of poverty is viewed as women’s work: women receive almost all of the loans and hold important leadership positions at the bank. This practice, Chatterjee tells the class, has its origins in feminist economics, which popularized the idea that women are more responsible budgeters than men.

So, Chatterjee asks the class, what did they make of Yunus’s hopeful vision?

“I find it a very interesting model, because microfinance was one of the first financial models that came from the Global South rather than the Global North,” one student observes.

“I thought it was more, I guess, refreshing than a lot of the other stuff we’ve referenced,” a fellow optimist offers—in contrast to other capacity-building measures they’ve studied in class, he notes, Grameen Bank is owned and run by the population it serves.

“Right, it’s almost like a cooperative,” Chatterjee echoes. Banks like Grameen are “not an externally imposed institution, but something that they will take ownership of and will be genuinely internal within the community.”

Yunus’s lecture offers “a lovely fuzzy version” of microfinance, Chatterjee says. Another assigned reading, a 2013 report from the Consultative Group to Assist the Poor, offers a more complicated perspective. The report features interviews with and actual budgets of low-income Bangladeshi households.

There’s also little evidence that households are using microloans as they were originally envisioned: to generate income. In reality, “they’re going toward consumption smoothing,” Chatterjee says—covering unexpected expenses for families who have no ability to save.

As the class enters its final minutes, Chatterjee asks students to share their overall perspective on philanthrocapitalism. Amid a crowd of skeptics, a few defenders emerge: “Although there’s a lot of issues with philanthrocapitalism, this is the way major philanthropy is currently functioning, so maybe the best thing to do is remain critical and find ways to work through it,” one argues. (“Very realist,” Chatterjee responds.)

Besides, a classmate offers, governments don’t have a perfect track record with development either. He pauses, and delivers what could be the motto of the day’s session: “I don’t think we’ve found a single not-mixed bag in this course.”

How (Not) to Save the World—an undergraduate course cross-listed in history, global studies, and human rights—met twice a week. Readings covered a range of topics in 20th and 21st century international development and included scholarly works, case studies, and reflections from development practitioners.

For their final paper—and 50 percent of their grade—students were tasked with imagining a Critical Museum of Development aimed at sharing insights from the course with the public, and writing about an object they would include in it. The essay, stated the syllabus, should reveal what the selected object “tells us about historical transformations (or continuities) in the idea or practice of development.”