Lack of skills outweighs race as a factor in wage disparity.

More than overt discrimination, what now drives America’s achievement gap between blacks and whites, says Chicago economist and Nobel laureate James J. Heckman, is a lack of skills. Arguing for the importance of early-childhood education, Heckman writes in a 2011 National Bureau of Economic Research working paper that the skills that determine success—not only what Heckman calls “smarts,” but also conscientiousness, perseverance, and sociability—emerge before children begin school.

To demonstrate the importance of skills versus racial discrimination, Heckman took the hourly wage shortfalls for adult blacks and Hispanics versus whites and adjusted them for skills, based on scholastic ability scores. For African American men, the wage gap shrank from 25 percent to 6 percent, and for Hispanic men it shrank to “essentially zero.” 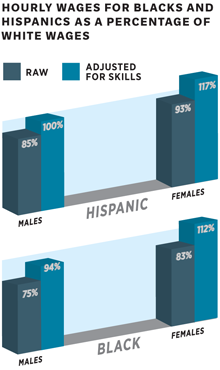