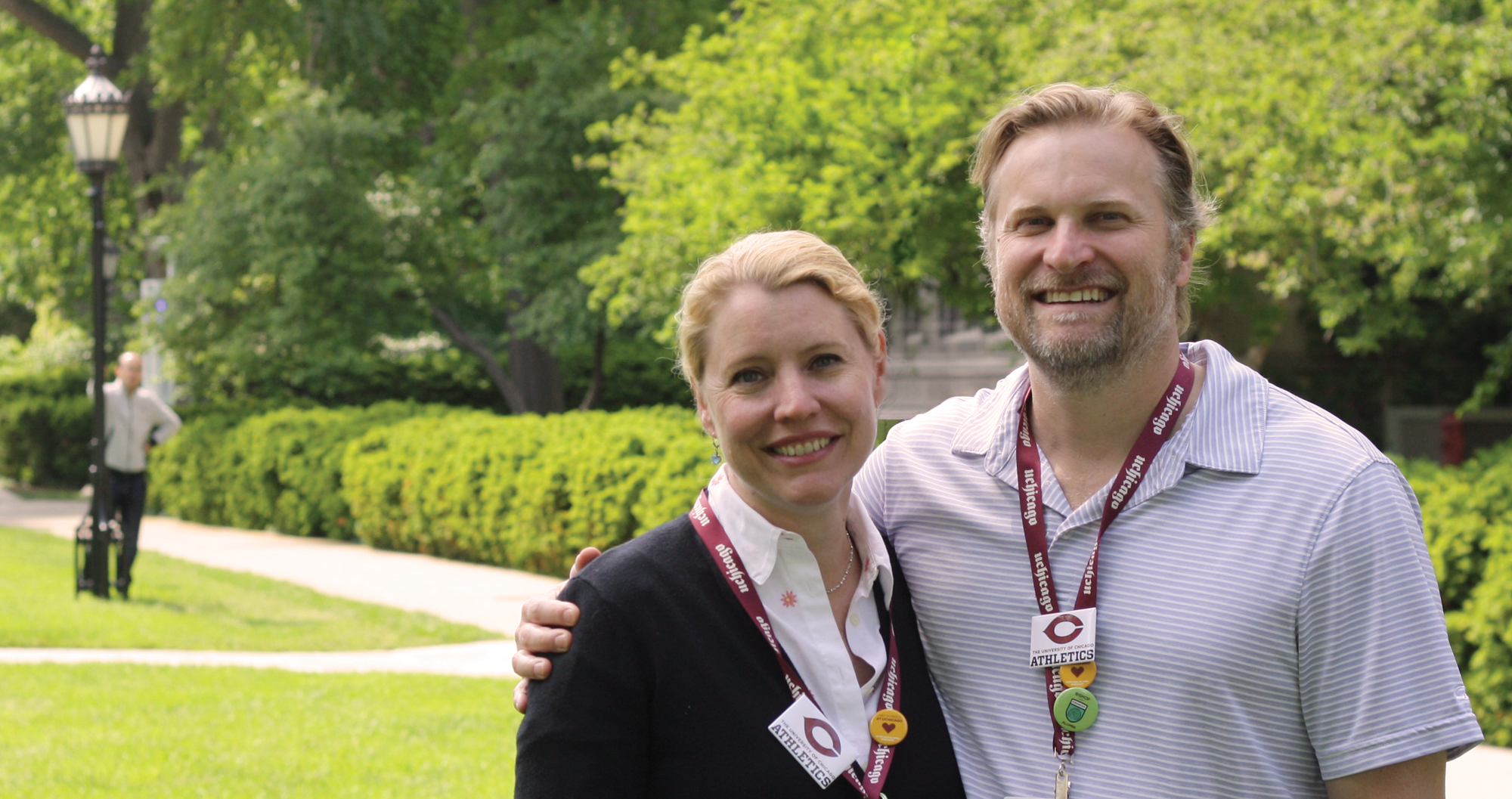 The Robertses on campus at Alumni Weekend in June. (Photography by Michael Vendiola)

Can fifth graders do calculus?

Math Academy has the proof.

During the 2013–14 academic year, Jason Roberts, AB’93 (mathematics), and Sandy Roberts, AB’96 (economics), were asked to coach their son’s fourth-grade Math Field Day team. Jason started with negative numbers and by the end of the year had covered much of prealgebra—typically taught in seventh or eighth grade. The next year the Robertses ran an enrichment class for the same kids, teaching topics from algebra, geometry, trigonometry, and even a little bit of calculus.

Jason, who started working at Uber when it had fewer than 10 employees, is a consultant and adviser to start-ups and Fortune 500 companies. Sandy serves on several nonprofit boards, including Junior League of Pasadena, Young & Healthy, and Pasadena Educational Foundation.

Math Academy expanded so quickly—from coaching to enrichment class to regular classes approved by the school board in just four years.

Sandy: I can vouch for that. But it was also coming from the kids. In fifth grade they kept asking, “What’s the highest math?” I told them there’s really no such thing, but let’s say calculus. So they asked, “When are we going to learn calculus?” every single day. Finally Jason was like, all right, here’s calculus. And they learned it. Fifth graders. Ten years old.

Jason: My background is in start-ups and technology. You can change the world with a good idea and furious execution.

There’s a natural sluggishness to school systems in general. You have to push really hard to change anything.

Is the program mostly boys?

Sandy: About half the class is girls, because we get them young enough. They’re in a cohort with other girls who love math. They develop their identities around the concept that they are good at math and being smart is cool. In a lot of our classes, the girls are dominant.

Jason: A couple of the top girls in my seventh-grade class are cheerleaders. We have two whiteboards spanning the walls so I can have everybody up at the board while I’m yelling out problems. Sometimes when these particular girls finish first, they practice their cheers.

Did you have tutoring or teaching experience before? Did you consider that as a career?

Sandy: Never. I was on the track team at U of C. The public schools wanted to do after-school track, so I volunteered, and I couldn’t stand it.

Jason: I was in 160s calculus so I was the resident math genius on our floor. I had a knack for explaining complex things to people. I would say, you think this is complicated, but I can explain it in three minutes. Watch. Sandy would always joke—

Sandy: Don’t ask Jason what time it is, he’ll explain how to build a clock.

Jason: I always had it in my mind that teaching was something I wanted to do. But I’m not going to lie. The kids can be really frustrating when they’re acting crazy.

Sandy: Jason is much more comfortable with chaos.

Jason: If it’s productive, I don’t mind the noise. I coach my kids’ under 6 and under 8 soccer teams. I give everybody a ball and tell them to dribble. It looks like insanity, but the kids are having fun and getting lots of touches on the ball.

When teaching advanced math to kids this young, do you have to do things differently?

Jason: The kids spend the hour doing math, not listening to me talk. It’s modeled after the concept of deliberate practice. When you take chess or tennis or golf lessons, you go to an expert and they give you immediate corrections.

We also employ something called distributive practice to counter what’s known as Ebbinghaus’s forgetting curve. Any new idea, name, word, whatever, starts to fade unless it’s reinforced, and exponentially decays to near zero. We’re continually hitting them with stuff right as they’re about to forget it.