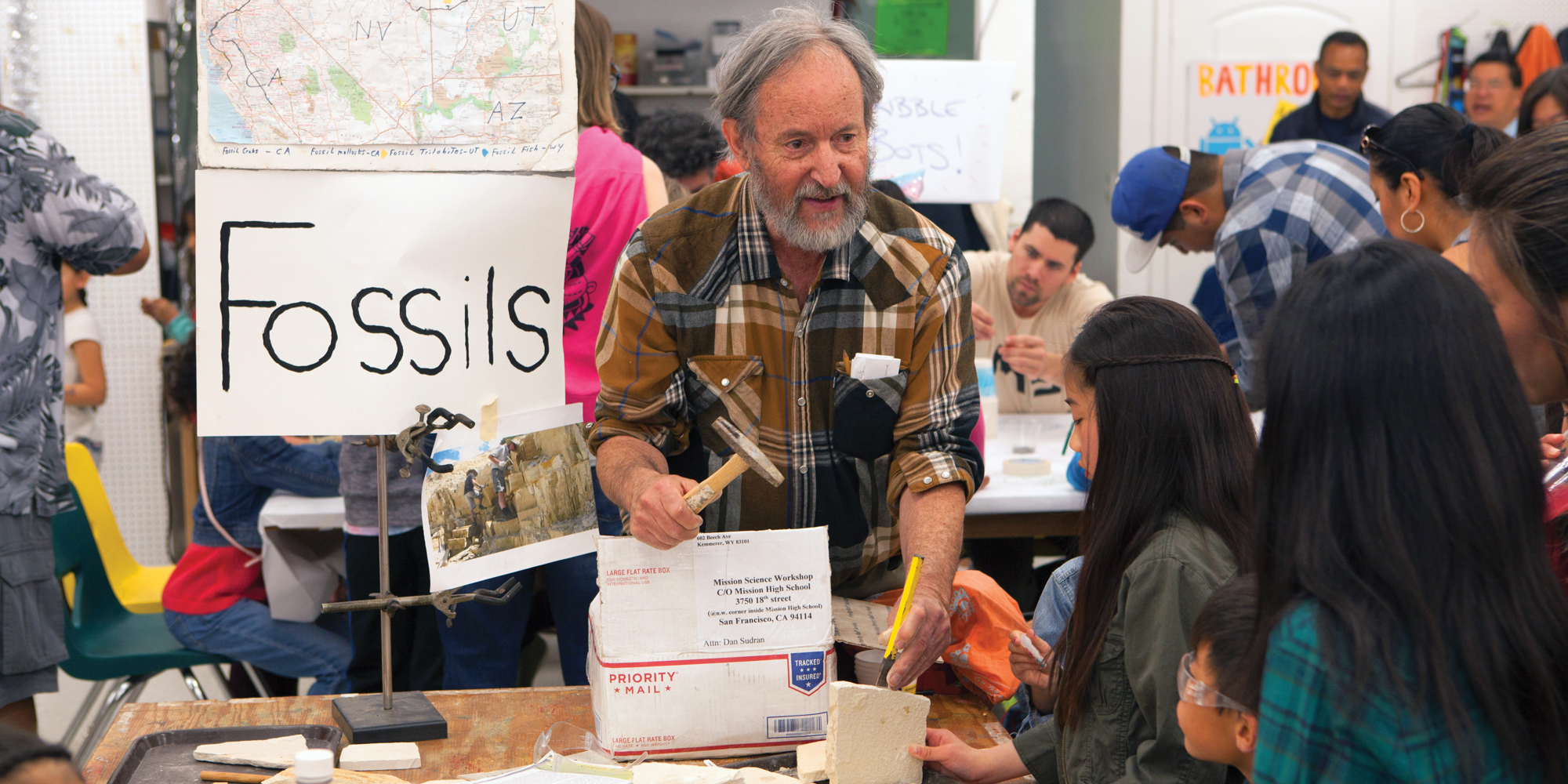 I tinker, therefore I am

How an activist and technician found himself at the Mission Science Workshop.

Take a shy, somewhat bright but neurotic, Jewish teenager, with left-leaning iconoclastic UChicago alumni social worker parents who lived through the Red scare in Kansas City, Missouri. Add the soul-crushing years of the mid-1960s, when young men his age were being sent to the killing fields of Vietnam while he wended his way through the University, majoring in modern European social history, hopeful for a life living up to the world-repairing vision he was raised with. Combine with the father’s successful project of raising his son to be fluent in Spanish. You get a recipe for a life full of surprising possibilities.

Fast forward to 2020, and you will find that teenager (me) at 76 years of age hunched over a workbench in the converted old auto shop at San Francisco’s Mission High School, desoldering the speaker wires of a Panasonic model 2400D AM/FM radio. Tinkering with this ancient device provides an opening for my students at the Mission Science Workshop to explore the wonderful three-dimensional world of electromagnetism, sound, and light.

How did I get here? It took three years as a law student, two years as a VISTA (Volunteers in Service to America) lawyer helping migrant farmworkers, and four years as an organizer under Cesar Chavez. Then, in an unexpected excursion to the engineering department of City College of San Francisco, I learned to use my hands and mind in new ways and—perhaps in unconscious defiance of my father’s intellectual, hands-off approach to life—undertook a 10-year career as an electronics technician.

In 1990, after repairing and calibrating my 50th Telequipment vacuum tube–based oscilloscope, it was time for a change. I opened the door of my home garage in the inner Mission District. Neighborhood kids (mostly Spanish speaking) came in to play with microscopes, oscilloscopes, and more. In six months, with the support of the chancellor of City College, that garage moved to a public space, creating something new in the world: a community science workshop.

It wasn’t all electronics. In the early days of the workshop, animal bones helped build the concept of active neighborhood-based science. Rather than holding out for full skeletons, I collected partials from roadkill out in the country. Regardless of condition, almost every spine was pretty sure to yield either a complete cervical, thoracic, lumbar, or caudal sequence of bones. Legs could be assembled from incomplete remains of horses, cows, deer, elk, and antelope.

Now summer vacations had a new purpose: scouring the California landscapes for bones—rocks and fossils, too, to share the story of animal structures, evolution, an ancient Earth, and its artifacts. Whale bones from nearby beaches were packed into a donated truck and shared with schools, where children could themselves help assemble a 30-foot-long skeleton.

Geology, which had always seemed the dismal science to me, came to life as well with the help of local geologists who shared my dismay at the gap between public understanding of Earth and its history and the specialized, often inscrutable vocabulary their profession has developed. The sea cliff at Mussel Rock became my local Grand Canyon. Its abundant fossils and virtually continuous exposure of shallow to deep water sedimentation provided evidence of three million years of sea level fluctuations along the San Andreas Fault.

Further afield, sites in Utah, Idaho, and Wyoming opened a window into “deep time” that had been enshrouded in jargon for me. Southeastern Idaho provided beautiful Paleozoic horn corals (300 million years old); Utah’s Cambrian trilobites (500 million) were available in amazing abundance in the House Range; and Wyoming’s Green River Formation held the largest deposit of freshwater fish fossils in the world. The friendly manager of a private quarry there was excited to provide his partials in limey shale. Back home, with small dollar-store wood chisels, students themselves uncover the 50-million-year-old fish from these partials.

Only three years ago did I begin to look at all those years of hands-on curiosity, discovery, and sharing in a new light: as tinkering. It happened when a friend donated some discarded speakers to the workshop.

Every speaker has a magnet surrounding the copper windings of the voice coil. The magnet pushes and pulls on the coil as electrical oscillations cycle through from a radio or other sound source. In my first self-conscious act of tinkering, I pried away the magnet of a very small speaker, leaving the voice coil attached. Then I disconnected an old radio’s output wires from its own speaker and connected them to the isolated voice coil of the small speaker. While bringing either pole of the separated magnet back up to the coil, I was amazed to hear sound. At a good inch distant from the magnet, the coil and its attached speaker cone began to vibrate and transmit a radio station signal, with my favorite raucous norteña music, right to my ears.

We can read about Michael Faraday’s discovery of the electromagnetic force, or see James Clerk Maxwell’s elegant field equations setting out the variables and how they relate. But producing that force with one’s own hand is an incomparably deeper experience for body and soul. I want to bring that kind of experience to as many people as I can.

So today I’m still whacking away at all sizes and styles of speakers—and so are the children, parents, and teachers who visit Mission Science Workshop. We do every manner of take-it-apart, put-it-together, figure-it-out, do-it-yourself tinkering adventures. We may even be rescuing ourselves from the increasingly addictive and abstracted digital world.

Tim Wu has called it “the tyranny of convenience”—when we are so accustomed to having machines take care of everything that we’re in danger of losing any understanding of how and why things work as they do. When Ernest Rutherford was asked how it was that so many Nobel Prize winners had worked in his lab in Cambridge, he said, “We were just like children taking a watch apart to see how it worked.” Except, of course, their watch was the atom.

When I see kids with their computers, tablets, and cell phones, I fear they have little notion of why their movements are producing the desired results—that is, of the workings of the real three-dimensional world they’re part of. That understanding is important, not only to keep things working, but also for our very souls. Rachel Carson had the soul in mind when she said this: “If I had influence with the good fairy ... I should ask that her gift to each child in the world would be a sense of wonder so indestructible that it would last throughout life as an unfailing antidote against the boredom and disenchantments of later years, the sterile preoccupation with things that are artificial, the alienation from the sources of our strength.”

Tinkering is a powerful antidote.