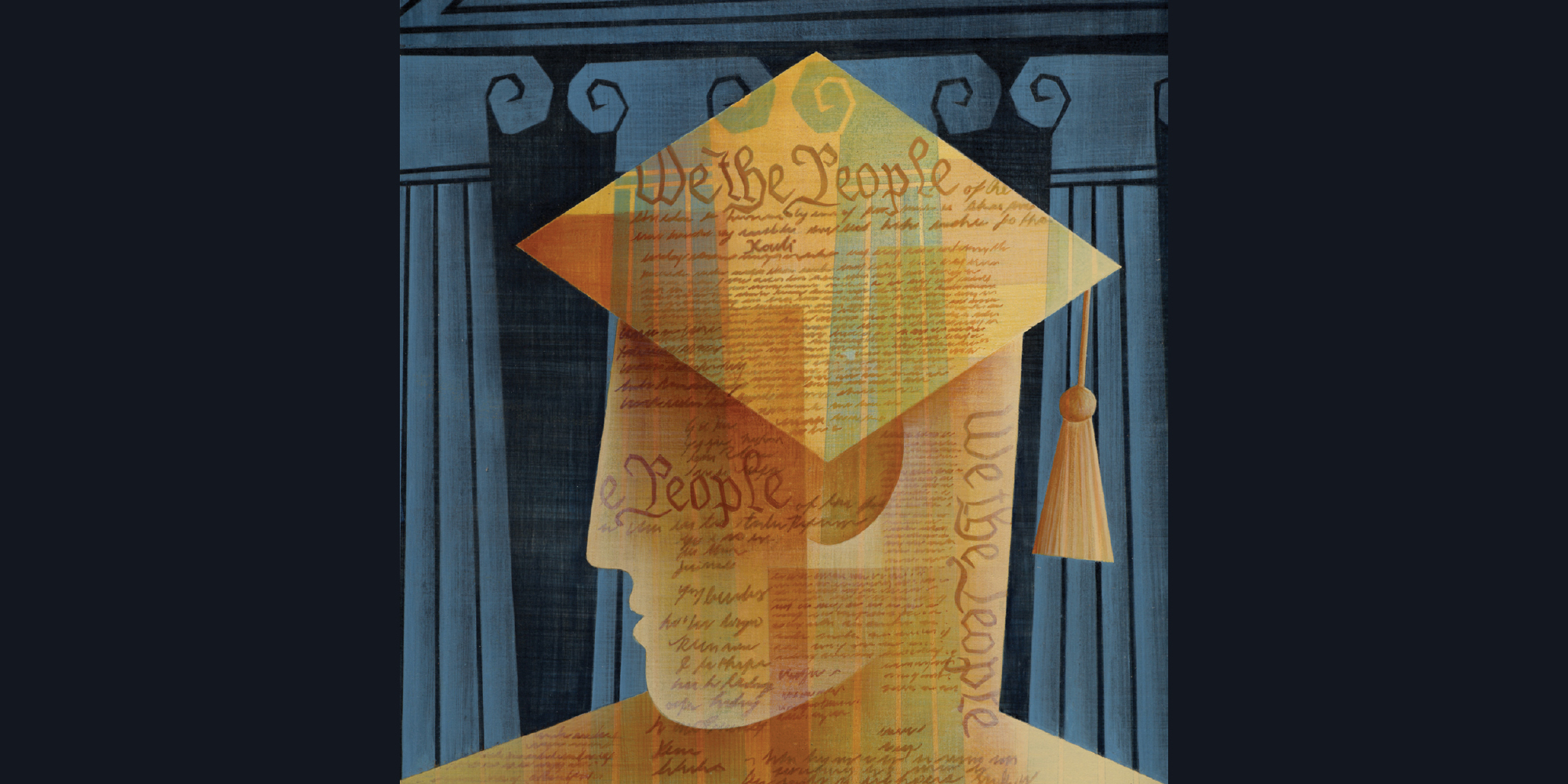 “No other arena of constitutional decision making ... comes close to matching the cultural import of the Supreme Court’s jurisprudence governing public schools,” Justin Driver writes in his new book, The Schoolhouse Gate. (Illustration by Sandra Dionisi/theisspot)

The Constitution goes to school

Justin Driver’s new book was either four years or three decades in the making, depending on how you count it.

There are the recent years he spent researching and writing The Schoolhouse Gate: Public Education, the Supreme Court, and the Battle for the American Mind (Pantheon Books, 2018). And then there’s the lifetime of personal experiences—as a student, a high school teacher, a Supreme Court clerk, a scholar of constitutional law, and a father—that triggered his inquiry.

Over the years, Driver, the Harry N. Wyatt Professor of Law, realized that millions are shaped for better or worse by their educational experiences—making public schools the “most significant site of constitutional interpretation within the nation’s history,” he writes in The Schoolhouse Gate. Most Americans are required to attend school, and few have options beyond public education. Schools represent “the first sustained exposure that most citizens have to a governmental entity,” Driver says.

Although Driver includes plenty of legal analysis, the book is, at its core, a story about the people at the center of precedent-setting cases—individuals including John and Mary Beth Tinker, who fought to express a political belief by wearing black armbands to school; or Gavin Grimm, who fought to use the bathroom that matched his gender identity (an issue that still has not been resolved); or Oliver Brown, who fought to send his daughter Linda to the all-white school just seven blocks from their house.

Driver examines how education law mirrors America’s broader struggle with civil liberties. In the past century, the Supreme Court has considered public education cases dealing with religion, free speech, due process, racial segregation, and more. “The public school has become a major flashpoint for the larger cultural conflicts that pervade our society,” Driver says.

At points, he questions cherished narratives—wondering, for instance, whether the mission to achieve unanimity in Brown v. Board of Education in 1954 hindered future efforts to address persistent racial isolation in urban schools. He also challenges the idea that the Supreme Court tends to follow the predominant views of the American public, pointing to the 1962 ban on teacher-led prayer in Engel v. Vitale, which drew widespread public rebuke, and Tinker v. Des Moines Independent Community School District. That 1969 ruling affirmed students’ right to engage in symbolic antiwar speech.

Although the Tinker decision was heralded in the media at the time, Driver believes Justice Hugo Black’s dissent offered the better barometer of public opinion. Black’s views reflected “a deep wellspring of cultural anxiety” that schools would lose control of their students, Driver says. Several subsequent cases limited Tinker’s reach by allowing schools to suppress sexually suggestive language and speech that promotes drug use. For some, those cases were an overdue restoration of schoolhouse order.

Driver worries about the erosion of Tinker and other recent trends limiting student rights: the rise of police officers stationed in schools and rulings that have exempted schools from certain aspects of the Fourth Amendment ban on unreasonable search.

His area of greatest concern is the continued practice of corporal punishment. In the 1977 ruling Ingraham v. Wright, the court made what Driver views as “a grave misstep,” arguing that the Eighth Amendment prohibition on cruel and unusual punishment “has no meaning within the school at all,” Driver says.

Reforms in these areas are possible regardless of the court’s makeup, he adds, pointing to state courts and legislative bodies as possible avenues. Whatever form it takes, however, change will probably require the courage of people like the Tinkers or the Browns.

“Even if one disagrees with the underlying constitutional claims,” Driver writes, “it is often difficult not to admire the students and their families for being willing to stand up for their understandings of the Constitution.”