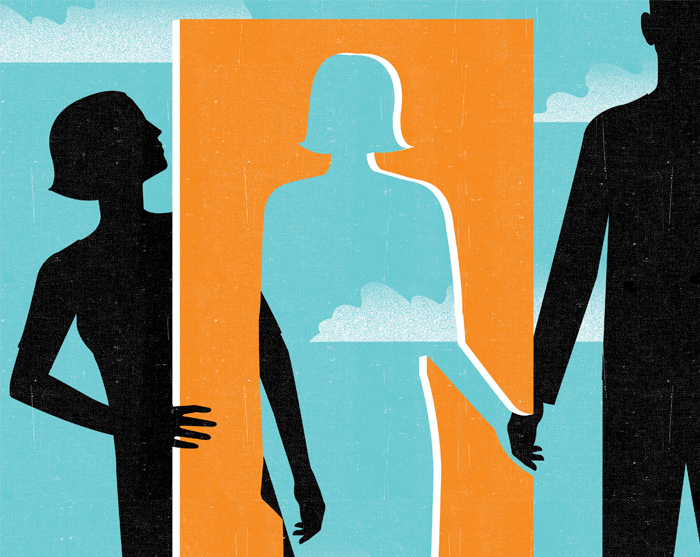 A good mayor is hard to find

The primary preoccupations of an unlikely political wife.

To look at me is to see the World’s Least Likely Political Wife. I have a Rosemary’s Baby haircut that I dye in the bathtub, and I regularly parade around in an oversized black T-shirt that reads FEMINIST in bold witchy letters. I own no tasteful wrap dresses or twinsets. I have a degree in medieval studies, and I write self-consciously smart-alecky young adult novels for a living.

And yet—I fell in love with an elected official.

It was an extraordinarily cute meet: writer is working on novel about young mayor, writer meets actual young mayor, young mayor has dimples and green eyes like a real-life YA love interest, writer solicits informational interview that morphs into a date. Fast forward 13 months, and writer has a ring on her finger and is kindly reminding the young mayor to please put his pizza crusts in the trash after the Sixers game is over.

My fiancé, Josh, ran for mayor of his hometown of Downingtown, Pennsylvania, at the tender age of 26, because, as he so charmingly put it on our first date, “elected office is the best way to help as many people as possible.” (Me: “How many suits did you own then?” Him: “Less than one.”) Over the past eight years, he’s seen taxes stabilize, a new train station take shape, and a band of rogue chickens terrorize the south side of town. He’s even gotten into a Twitter spat with Donald Trump.

And so here I am, betrothed and thrust into a curious extracurricular for the rest of my life. (Yes, I have heard all the Parks and Recreation jokes. If this makes me Leslie Knope, so much the better.) I had to learn fast: I trust everyone and speak much too freely, even to reporters and opponents; I am still in the broke-artist mind-set of “attending events for the snacks” and chomp down hors d’oeuvres instead of making polite conversation; I have a (now curtailed) habit of swearing at Pennsylvania senator Pat Toomey on Twitter.

Some of it is fun: ribbon cuttings (yes, there are giant scissors), parades, 5K kickoffs, fire department chicken barbecues, Josh ducking out to “marry someone real quick” at the local brewery, holding the Bible in my best Michelle Obama dress (bought secondhand, worn frequently) for his swearing in. Some is exhausting: knocking on every door in town and foisting political literature on unsuspecting residents, trifolding fundraising letter after fundraising letter, wearing high heels at any time for any purpose. Some is oddly glamorous: being stopped on the street and congratulated (for my book coming out, for a landslide win, for our engagement), picking up my phone during election week and barking “talk to me,” holding a boom mic during an ad filming. Some is exhilarating: rallies, speeches, protests, debates. And some, the worst part, is emotionally taxing: being berated to the point of tears while canvassing, being lectured on the Main Street parking situation at a cocktail party, driving past a giant sign with my fiancé’s face on it declaring him a no-goodnik who’s taking the town to hell in a handbasket.

And yet it’s not all that unfamiliar. My grandfather Dick Thornburgh was governor of Pennsylvania and then US attorney general. I grew up with formal family portraits every year, award ceremonies, names in the paper, names in the social register, and photos of my family members with presidents, popes, dignitaries, and Jimmy Stewart lining my grandparents’ condo walls. Grandpa was even on Da Ali G Show, which, trust me, got me a lot of mileage in middle school.

So in the right context, with the right group of people, my last name will elicit a nod. Other times, people squint between me and Josh: How does the granddaughter of a Republican governor end up with a progressive Democratic upstart, and why is her hair that color? My mother and grandmother have lived through smear campaigns and public outrage and crushing defeats and even death threats (it’s fine, everybody’s fine!), and they can look back on it winsomely. But I never thought to ask how it made them feel about themselves: to have people set up lawn chairs to watch you leave your wedding ceremony because you’re marrying the First Son of Pennsylvania, or to be nine months pregnant and running into a burning campaign office to rescue index cards of precious voter data.

Controlling for other variables, married politicians tend to outperform single ones. But research has yet to weigh in on how marriage benefits or hinders YA novelists. Aside from the standard patriarchal nonsense of dramatically lowered lifetime earnings, my heterosexual marriage will give me a role that is not only reductive but publicly so: political wife. I will morph from “somebody’s granddaughter” to “somebody’s wife” with barely a gasp in between. When we are both rich and famous, will the society pages refer to “Blair Thornburgh and her husband, the politician Josh Maxwell,” or “Mayor/Representative/Senator Maxwell and his wife, Blair,” no profession specified? What if the swearing/sex/teenage hijinks in my novels offend the electorate? What if we have a fight in Wegmans over whether or not to spring for the family size cheese and people whisper at our lack of literal family values behind their carts? What if he starts calling me “Mother” and I can’t make him stop? What if, God forbid, our eventual daughter takes a party drug in a fit of pique and ends up kidnapped with her security detail dead, like Zoe Bartlet on that one episode of The West Wing?

I am being hyperbolic. That is what I do; wife or no, I’m a writer. And my intended husband knows and enjoys this. “You’re writing a book?” he said when we met. “I’m meeting with this writer tomorrow,” he told a friend before we got coffee the first time. “Blair,” he will announce at every steam-table chicken dinner and fish fry, “writes books about smart teenage girls.” When I told him, “Hey, I might write an essay about marrying the mayor, is that chill?” he said “Just don’t make too much fun of me.”

If the personal is political, then our relationship has a feminist platform:

I have (on good days) a career, or (on less productive ones) a hobby, but regardless, I am defined as someone who does stuff and doesn’t just exist at the side. Sure, I have my fair share of stand-still-look-pretty moments ahead of me, and I probably will have to stop going to Wawa in my pajamas and yesterday’s eyeliner (even if it does make me look like a Woman of the People). I will bear children as photogenic as possible for those soft-focus campaign ads. I will fasten his cuff links until the day I die. Because it is fun, and exhausting, and oddly glamorous, exhilarating, and emotionally taxing. But in the end, because it is my choice.

So I won’t be ditching the FEMINIST T-shirt. But I might buy a new cardigan to wear over it.

Blair Thornburgh, AB’12, is the author of the young adult novels Who’s That Girl (HarperTeen, 2017) and Ordinary Girls (HarperTeen, forthcoming). By day she is a senior editor at Quirk Books in Philadelphia. She lives—where else?—in Downingtown, Pennsylvania.