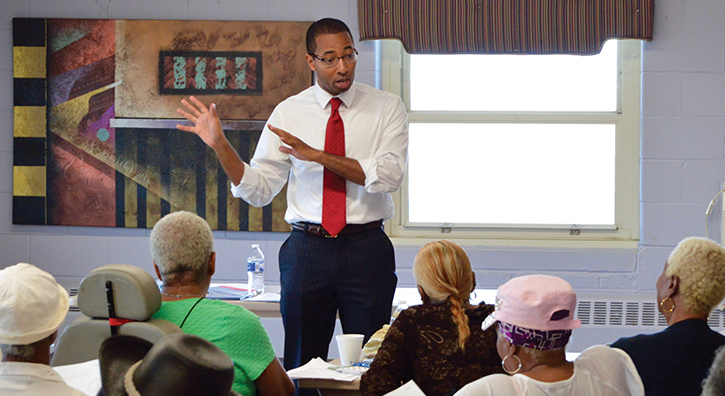 How to run for office

Christian Mitchell grew up in Chicago’s western suburbs of Maywood and Westchester. He came to UChicago intending to major in economics, get a JD/MBA, and become a sports attorney.

Instead, a conversation with his resident head at Alper House during his first year convinced him to major in public policy studies and get involved in Democratic politics. Now he represents Illinois’s 26th District, which stretches from South Chicago to Streeterville and the Near North Side.

“Don’t run just to run. Run because you see something that needs to be different,” Mitchell says. “If you’ve got a fantastic state elected official or fantastic alderman, why are you going to run against them?”

Ask yourself why again.

Anybody can say they want to help people or make a difference. “What is the thing that keeps you up at night? What is your story?”

Work on somebody else’s campaign, preferably a local one.

You’ll learn a lot about campaigning and possibly make a future ally.

Check your expectations—and your ego.

Talk to people who have done it before.

“See if you can get folks to support you. For example, if the state rep is retiring, will that rep support you?”

You can and should hit up friends, relatives, and coworkers, but you’ll also need institutional support. “Are you running as a Republican? What work have you done with the local business community or the manufacturing association or other local business interests? If you’re a Democrat, who do you know in the environmental community? Who do you know who is interested in campaign finance reform? Do you have relationships with labor unions, if that’s the sort of Democrat that you are?”

“If those numbers come back and say it’s an uphill climb,” Mitchell says, “you’ve got to decide, ‘Do I want to make this run to get my name out there? Or do I want to wait for a chance that I can win?’”

All candidates must file a nominating petition with legal, verifiable signatures of voters who live in their district. The number of signatures needed varies by office and state. Mitchell needed a minimum of 500.

Mitchell recommends starting with a campaign manager, who will hire everyone else.

Understand that even if you’ve run campaigns, it’s not the same when you’re the candidate.

“The candidate is the most useless human being in the entire campaign on Election Day.”

* According to legend, a ward committeeman said this to a young Abner Mikva, JD’51, when he tried to sign up as a campaign volunteer. Mikva went on to serve in the Illinois House and the US Congress and became a federal judge and White House adviser.