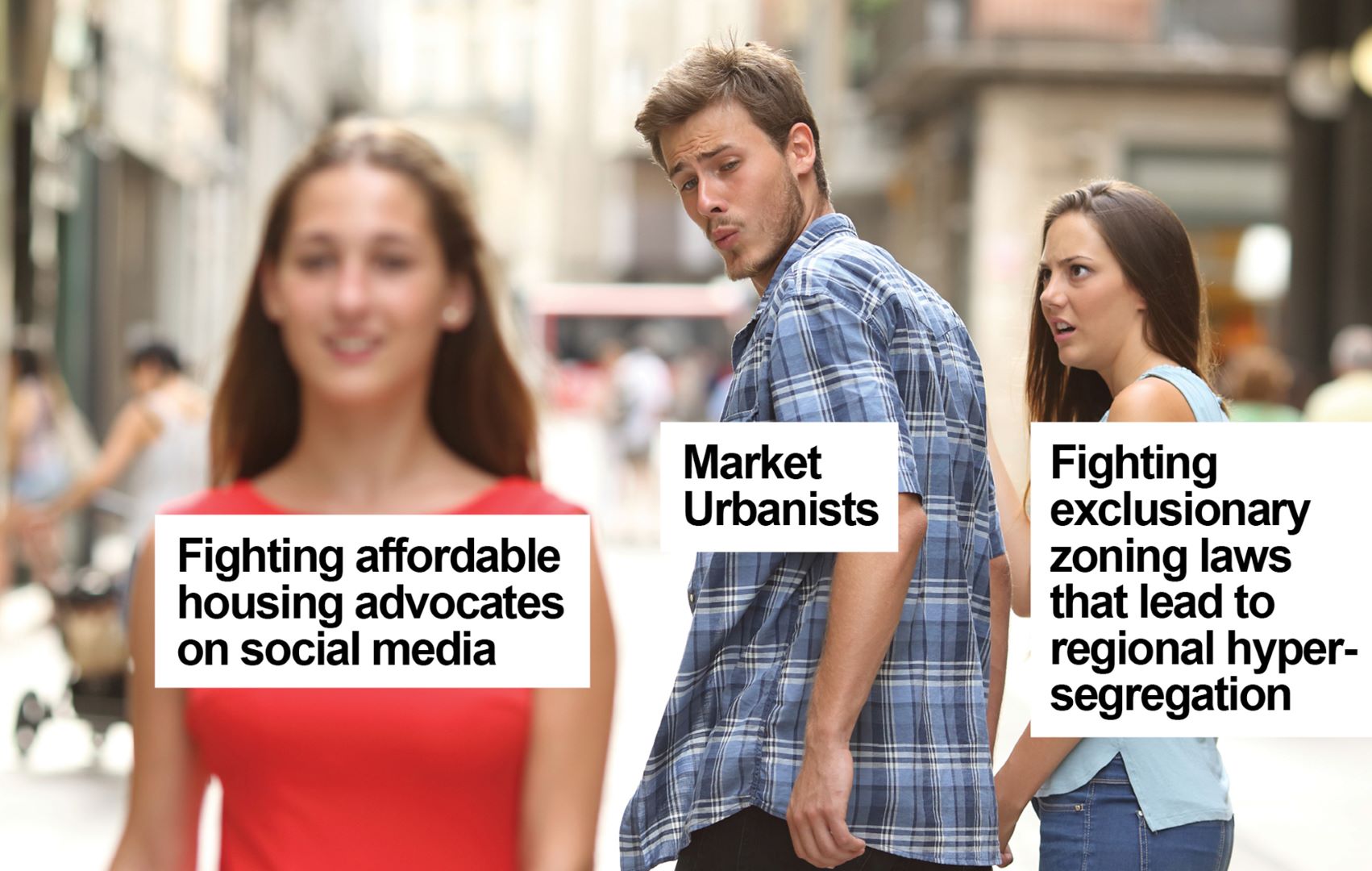 A NUMTOT version of the Distracted Boyfriend meme.

It started as a joke. Then it became a thing.

You might imagine that the appeal of a joke Facebook group about new urbanism—a design movement that promotes mixed-use, walkable neighborhoods and public transit—would be somewhat limited. And you would be wrong.

Juliet Eldred, AB’17 (geographical studies and visual arts), started New Urbanist Memes for Transit-Oriented Teens (NUMTOT) in March 2017, during finals week. Eldred is now an analyst at a transportation consulting firm in Boston, and NUMTOT has more than 125,000 members. There are three administrators, including Emily Orenstein, Class of 2019, and nine moderators. The group had to add moderators in Australia because discussions got heated while the American moderators were asleep.

NUMTOT has been written about in Chicago magazine, the Atlantic’s Citylab blog (“The Transit-Oriented Teens Are Coming to Save Your City”), the Guardian, and the New York Times. It’s inspired more than 60 spinoff groups, including Two Wheeled Memes for Bicycle Oriented Teens, Transit Focused Snaps for Composition Minded Chaps, Teutonische Städtebau-Meme für verkehrinteressierte junge Erwachsene, and NUMTinder.

One day this past summer, Eldred took time during her lunch hour to explain the NUMTOT phenomenon.

First, you’re not actually a teen.

How did NUMTOT get so famous?

It struck a nerve in a way I don’t think any of us were expecting. Things you would think are niche—street design and trains and planning—are actually relevant to everybody and affect our day-to-day lives.

Do your parents understand the memes?

My mom is in the group. She’s very supportive. Sometimes she’ll call me a NUMTOT and I’m like, “Mother, please don’t.” She does occasionally ask me to explain things. It’s weird and sort of cringey to have to explain.

It’s not just a meme group though.

I sometimes wish people were less serious. We started it as a joke group. It was never intended to be a serious discussion group.

Back in November 2016, I had started the Facebook group I Feel Personally Attacked by This Relatable Map, mostly about maps and stuff. In March 2017 there was a thread about highway planning. It ended up devolving into joking about Robert Moses [the urban planner who wanted to drop a highway on Greenwich Village] and Jane Jacobs [author of The Death and Life of American Cities (Random House, 1961) and Moses’s archenemy]. That led to the idea of starting a new urbanist shitposting Facebook group.

Is there a long-term plan?

Usually Facebook groups burn out on their own. This group hasn’t shown any signs of doing that. The broader mission, which has sort of become a reality, is to connect people to real-life organizing and activism opportunities.

I actually went to a NUMTOT Meetup group in Somerville [Massachusetts] that I had no part in organizing. There were 20 people there. I was really surprised.