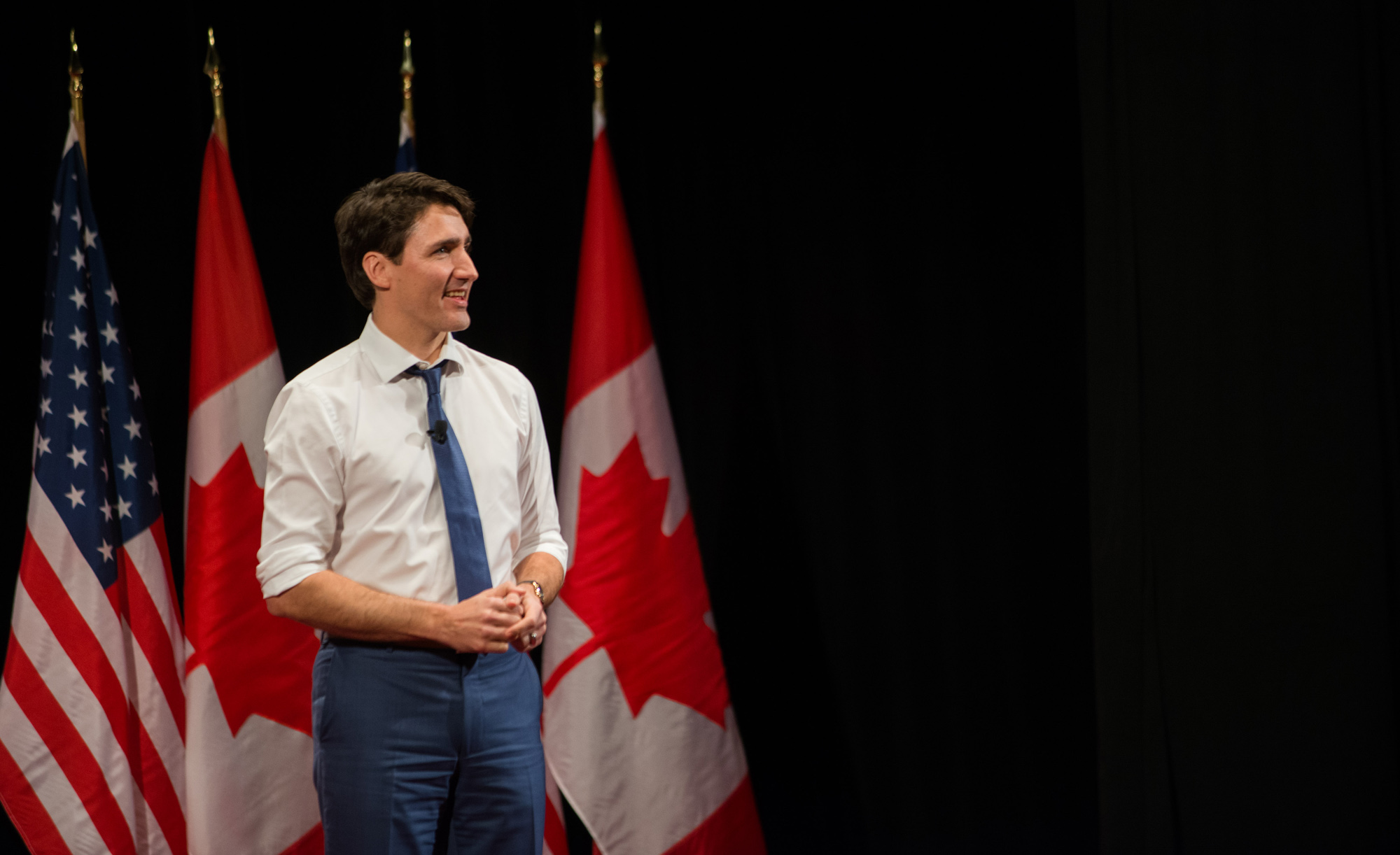 Himself a former teacher, Justin Trudeau told UChicagoans that just as a good teacher helps students figure out the answers for themselves, a good politician should empower citizens to take agency in their own lives. (Photography by Jean Lachat)

The Institute of Politics has attracted its share of politically engaged celebrity speakers: comedian and former Daily Show host Jon Stewart, actress and playwright Anna Deavere Smith, members of the cast of The West Wing, and Chance the Rapper. And so, to celebrate its fifth anniversary, IOP brought out a politician with celebrity appeal: Canadian prime minister Justin Trudeau.

Students had signed up to attend ahead of time, but even so, 90 minutes before the event, the line stretched from Mandel Hall, the venue, down the corridor toward 57th Street, and into Hutch Commons so as not to block the entrance to the Reynolds Club. Students who hadnʼt registered in time inquired about a waiting list.

Trudeau spoke for about half an hour, then sat down for a Q&A with IOP director David Axelrod, ABʼ76. Especially with Axelrod, he touched on various political issues: diplomacy, immigration, and, most of all, free trade. While he spent some time plugging the North American Free Trade Agreement—rattling off a series of statistics, including that the United States sells more goods to Canada annually than to China, Japan, and the United Kingdom combined—free trade wasnʼt his main agenda, nor the reason the IOP had invited him.

“Every single thing we do at the IOP,” said fourth-year and IOP senior chair Caroline Hutton in her introduction of Trudeau, “goes back to our mission of wanting to inspire young people to go into public service.” Trudeau, she said, embodied that ideal.

Trudeau is well known as the son and grandson of Canadian politicians but said he draws his inspiration less from the generations who preceded him than the ones who follow him. As a former teacher, then an activist, and now a politician who is popular “with young fans as well”—as University president Robert J. Zimmer joked when a baby squealed during his welcoming remarks—Trudeau has had a lot of experience with young people.

He called the students in his audience—whether they were active in the IOP, interested in politics, or just curious to see him—“exceptional” for their political engagement. But, he pointed out, “those 10 friends you have back home, who would never be caught dead at a political event or taking a political class, still care deeply about the world and about their role in it.”

They, Trudeau said, give him hope for “civil, intelligent, rational discourse in politics.”

The world, he added, has a lot to learn from young people-from their energy, but also “from your willingness to challenge the way things have always been done, and say, ‘Why can't they be totally different?ʼ”

After Trudeau thanked them—in English and French—“for everything you're going to be doing in the coming years,” the audience filed out to the music of Generation X Canadian rock band the Tragically Hip: one of Trudeauʼs favorites. It wasnʼt Chance, but even Trudeauʼs youthful cred has limits.