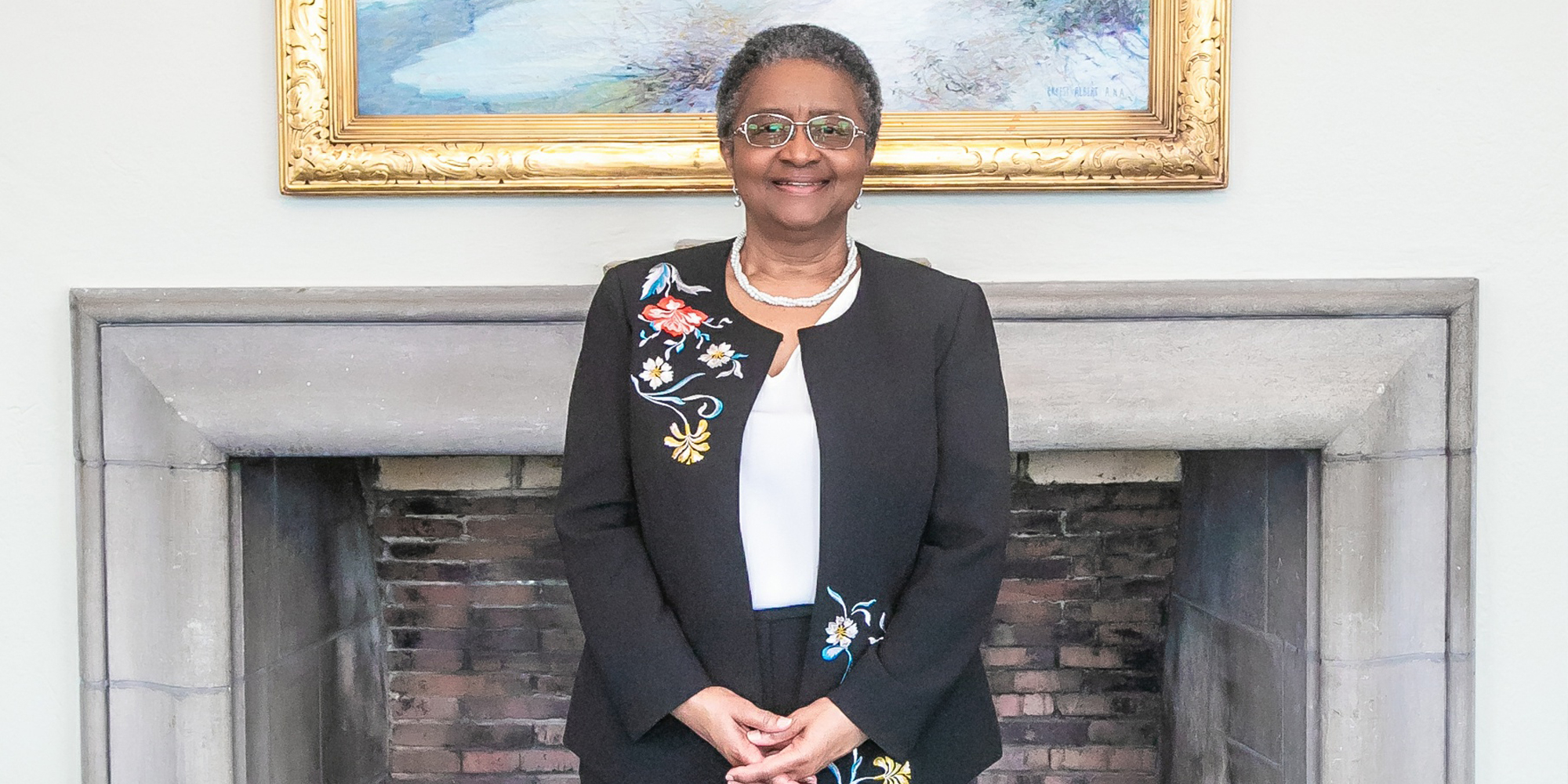 In February Hampton returned to campus to accept the University’s alumni Diversity Leadership Award—a joy, she says, after considering herself “somebody who was just in the background.” (Photography by Ven Sherrod)

By
Author
Laura Demanski, AM’94
|
The University of Chicago Magazine
—
Spring/19

As a 10th grader, Sybil Jordan Hampton was one of five African American students to attend Little Rock Central High School. It was two years after the Little Rock Nine enrolled at Central in a national test of Brown v. Board of Education and anti-integration protests and violence caused the Arkansas city to close all its high schools for the 1958–59 school year.

When they reopened, Hampton, MST’68, and her cohort enrolled more quietly—in fact, to deafening silence from her white classmates that lasted the entire three years until she graduated with honors.

From there Hampton studied English at Earlham College, then education at the University of Chicago and Columbia University’s Teachers College, where she focused on Lawrence Cremin’s “educating professions” and earned her doctorate in 1991. After a 15-year career in higher education administration, Hampton moved to philanthropy, becoming contributions manager for education and culture at the GTE Corporate Foundation.

Hampton never envisioned returning to live in Little Rock. So it was unexpected when she had the opportunity to go back after 30 years to become president of the Arkansas-focused Winthrop Rockefeller Foundation (WRF), which she led for a decade. After retiring, Hampton served for seven months as general manager of the Arkansas Symphony Orchestra. She recently concluded a five-year term on the Arkansas Ethics Commission.

This January Hampton returned to campus to accept the University’s Diversity Leadership Award. Bestowed each year on an alumnus or alumna, a faculty member, and a staff member, the award recognizes contributions to diversity and inclusion at the University and in the broader community.

How did you end up at UChicago?

Having served as a college extern with the US Public Health Service and worked with migrant families in rural New Jersey, my burning desire was to earn a master’s in public health. My first husband [John G. Stevenson, AM’67, PhD’75] was selected as a Woodrow Wilson Fellow at the U of C in philosophy. Without an opportunity to pursue a graduate degree in public health at UChicago, I became the working wife of a graduate student.

After a year at the Social Security Payment Center, I knew that was not a good fit. What should I do? My experiences with teenage classmates at Little Rock Central High made me not ever want to work with young people. My mother was an elementary school teacher, and I wanted to break that mold. And I felt intimidated at the thought of graduate study at the University of Chicago. But John thought I would make a great teacher and was ready for graduate study. I applied reluctantly and was pleasantly surprised to be awarded a full scholarship.

Oh, I loved being a graduate student. The program was small, with only 12 women students. We worked as a team to prepare to teach urban low-income African American students. Once again in my life, I was the only African American.

Although Earlham was a great private liberal arts college, my fellow students had earned degrees at more prestigious colleges and universities. The academic challenges were a small part of what daunted me. Life in a small Southern state was very different from life in New York, Chicago, Philadelphia, Boston. My classmates talked about experiences that were new to me—the New York Philharmonic Orchestra, family trips to Paris, sailing, skiing, shopping at Bergdorf Goodman and Saks Fifth Avenue, brands of clothing and shoes I did not know.

Although I was a third-generation college-educated person, I was the first generation to be educated in a so-called elite institution of higher education. At the end of our program, one woman said to me, “We always thought that you didn’t talk to us because you were the smartest.” And I fell out laughing. I said, “No, I didn’t feel that I had anything to say, because you were talking about experiences that were so different from mine. I was just listening.”

I learned at Chicago that people can see and appreciate you in ways you can’t see yourself. I learned to be more confident when opening myself to new experiences, new ways of seeing and being that took me out of my comfort zone. And I learned to appreciate the example from my parents and grandfather of a commitment to lifelong learning.

What was it like growing up in Little Rock?

My family consisted of my parents, my maternal grandfather, my brother, and me. Our house was exactly seven blocks down the street from Little Rock Central High School. In our racially mixed neighborhood, my family owned a small grocery store located on the northeast corner of 7th Street, and the Grants, a white family, owned a small grocery store on the northwest corner. In the segregated South, two grocery stores on adjacent corners was not an unusual arrangement.

Because my parents were business owners whose provisions came only from white vendors, my brother and I always had relationships with people who were not African American. We experienced our parents and grandfather being treated with dignity and respect by their vendors. These men were very kind and friendly with all of us.

How could we know as children the power of what we experienced? We gained confidence in interacting with all types of people and understood that all people who were different did not hate us or mean to harm or misuse us. In our segregated world, we learned that we mattered despite all the negative messages sent by “colored only” signs and hostile people who referred to us using the N-word.

How did you and your family decide that you would go to Central?

As young people we were in those conversations and encouraged to think that somebody had to do it. My parents said, “If you want to do it, we’ll support you.” My brother went the year after me, so my parents had two children at Little Rock Central High School for two years.

And your experience was entirely different from that in your parents’ store.

Everybody wondered what would happen. And what happened is that we were shunned. That was quite stunning, that the resistance changed from harassing in the hallway in 1957–58, to literally just: You didn’t matter. You didn’t exist. People didn’t look at you. People didn’t speak to you. And that went on from the first day to the last day. No one in my homeroom ever spoke to me.

How did you maintain your focus and stay strong?

My pastor, Rev. R. K. Young, always taught us that from the time of slavery, our people had lived with the hope that the promises of democracy would be realized, and that our people died with those promises not being realized, but they left a legacy that said, “Keep hope alive, work for this.”

As a child I was taught that it might be my generation that would have the breakthroughs, so I needed to stay focused on doing well, doing well, doing well. And that education was something that could never be taken away and would be the key to my success. I had always been a very studious person, a big reader, so I continued to do at Central what I had done before.

With hindsight, how far do you think we’ve come?

I talk to young people who come to the Little Rock Central High School National Historic Site, groups from all across the country. I’m always pleased at the end when some ask, “Will you step aside and talk to me? Would you put your arm around me?” And they’ll say, “I’m the only person in my AP class. And people don’t really know how to reach out to me.”

What happened to me continues to happen because there are so many opportunities for young people to be isolated if they are the only one—the only Latina, the only African American—and particularly if you start looking at International Baccalaureate and Advanced Placement programs. There’s a dwindling of diversity.

Why did you move to philanthropy?

It became clearer and clearer when I was studying at Columbia that the things foundations fund very often change the direction of a society. They have the money to try innovative things. And I thought, I want to be in a place where people are not afraid to take a risk and try a program.

The career shift made sense because I understood the powerful role philanthropy plays in investing in and sowing the seeds necessary for the systemic eradication of economic, racial, and social injustice. If we are to challenge the status quo, independent agents are required, and philanthropic organizations are among the best examples.

You emceed the 60th anniversary of Central’s desegregation. What did that mean to you?

So many people are startled to discover that people went to Little Rock Central High School after 1957 and the Little Rock Nine. You know, the story just stops. People don’t understand that school desegregation is a process. It’s been an ongoing process, and people treat it as if it were a sound bite.

There were many, many young “foot soldiers” who made tremendous sacrifices like my brother and I did to be part of the Little Rock Central High School desegregation struggle. Most attended college and enjoyed successful careers. There were a few who didn’t fare as well.

But also, not everybody gets the respect for being foot soldiers. You know, it’s not just the warriors.

When people hear your story, what do you want them to take from it?

That one person, one person with passion and with fortitude, and with a vision for how they can make a difference in some small way, matters. Sometimes young people think that you have to do something that makes you an icon, that gets in the newspaper. Just because someone doesn’t know your name doesn’t mean what you have done is not significant.

How did it feel to come back to the University to accept the Diversity Leadership Award?