By
Author
Adrianna Szenthe, AM’14
|
The University of Chicago Magazine
—
Mar–Apr/14

Much of the federal government’s wasteful spending happens at the very end of the fiscal year, and a recent study by UChicago economist Neale Mahoney and Harvard’s Jeffrey B. Liebman demonstrates how. In a National Bureau of Economic Research paper, the researchers report that 2013 spending skyrocketed in the final week of the fiscal year, to roughly five times the weekly average. Most federal agencies must either spend their entire budgets before the fiscal year ends or return the unused amount to the Treasury and risk a budget cut the following year. Mahoney and Liebman refer to this as a flawed “use it or lose it” approach, forcing many agencies to commit to lower-quality projects. Using the government’s own data, the researchers gauged quality based on cost, schedule, and performance.

The economists advocate allowing federal agencies to roll over unused funds into the next fiscal year, without consequences for the following year’s budget. It is a solution that has worked well, they argue, for the Justice Department’s information technology budget since 1992: more than a decade later, IT spending at the DOJ is considerably lower than non-IT spending at the DOJ, lower than year-end IT spending at other agencies, and does not drop in quality at the end of the year.

Spending in billions of dollars 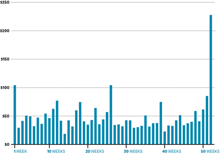 Federal contracting by week, 2004–09, spending in billions of dollars