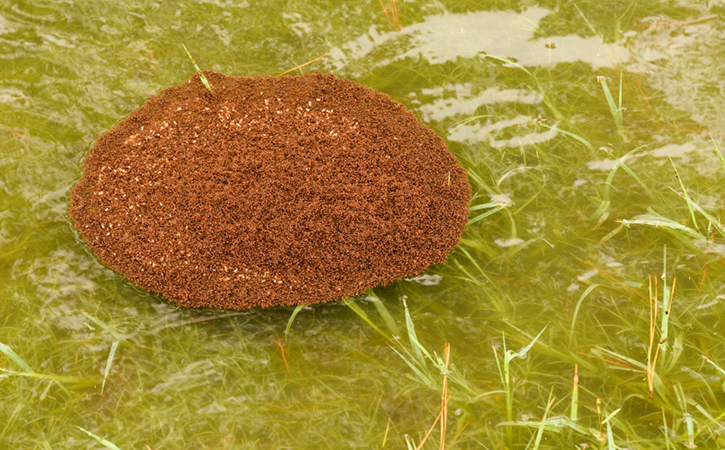 Why the invasive species Solenopsis invicta has thrived in Texas.

Earlier this year, I met Benjamin Blanchard, a graduate student in the Committee on Evolutionary Biology who made a name for himself on Twitter by asking public figures their favorite thing about ants. Blanchard is not just a recreational ant enthusiast—he’s also an expert. His dissertation focuses on the evolution of the Polyrhachis (“many-spined”) ant group.

So when I saw a report from Houston about massive floating colonies of fire ants, I knew immediately whom to ask about them. Blanchard was kind enough to take a few questions by email; he also pointed me to a Daily Ant article recommending to readers that “whether you are a human or a noninvasive ant, you avoid these floating rafts to the best of your ability.”

What type of ants are these, and what is known about them?

Fire ants, Solenopsis invicta, are a highly successful invasive species in the southern United States and elsewhere. The South American tropics, including parts of Brazil, Peru, and Argentina, are their native home. But they have since greatly expanded northward, assisted by human trade and travel, and their ability to conduct successful invasions is likely owing to several traits.

For one, their colony numbers can reach into the millions, and the workers are famously aggressive. Colonies are typically “polygynous,” that is, a single colony has multiple queens, which may confer resilience against various environmental and ecological factors—even if a large portion of the colony is destroyed, at least one queen, and thus the colony, likely survives. And in general, fire ants are simply highly adaptable to various environments.

Why are they able to float?

Fire ants’ ability to create a giant floating raft out of their bodies evolved in their native, tropical habitat, where a large amount of rain (and flooding conditions) are much more common. Although evolutionary processes couldn’t have “predicted” it, this trait has now proven useful for the ants in the new Texas territory they invaded decades ago. Check out this nice article in Wired or this video by Vox for more on the mechanics of this behavior.

What does this tell us about invasive species?

An overall biological lesson from this is that species that happen to evolve traits that allow them to occupy a wider range of habitats are often less likely to go extinct and more likely to turn invasive. But based on the relatively small number of invasive species compared to noninvasive species, it may be very difficult to evolve a suite of characteristics that allows a species to be expansive, generalist, and competitively dominant all at the same time. Plus, even fire ants have some limits, and freezing temperatures are one of them ... for now!