A Chicago astrophysicist calculates the fastest way to get airplane passengers into their seats.

Figuring there had to be a more efficient way to board passengers onto an airplane, astrophysicist and Fermilab postdoc Jason Steffen built a computer model a few years ago to investigate. He discovered that loading passengers at random would be faster than the methods most airlines use. He advocated a staggered process (right) that starts at the rear of the cabin and works its way forward, skipping every other row, loading the window seats first, then middles, then aisles. In 2008 he published his findings to a flurry of media but little interest from airlines.

Last fall he tested his method against four others on a Hollywood sound stage. Seventy-two people, children and adults with roller bags and carry-ons, boarded a mock 757. The results, published in the Journal of Air Transport Management, show that it took six minutes, 11 seconds, to board the plane from back to front and six minutes, 54 seconds, to board it by sections. Boarding window seats, then middles, then aisles took just over four minutes, and boarding at random took about five. By contrast, Steffen’s staggered process took three minutes and 36 seconds. 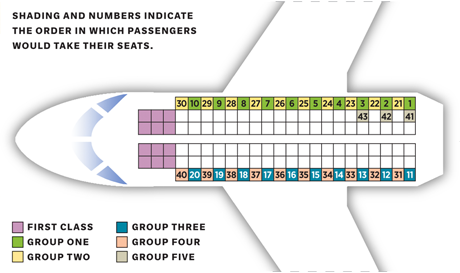