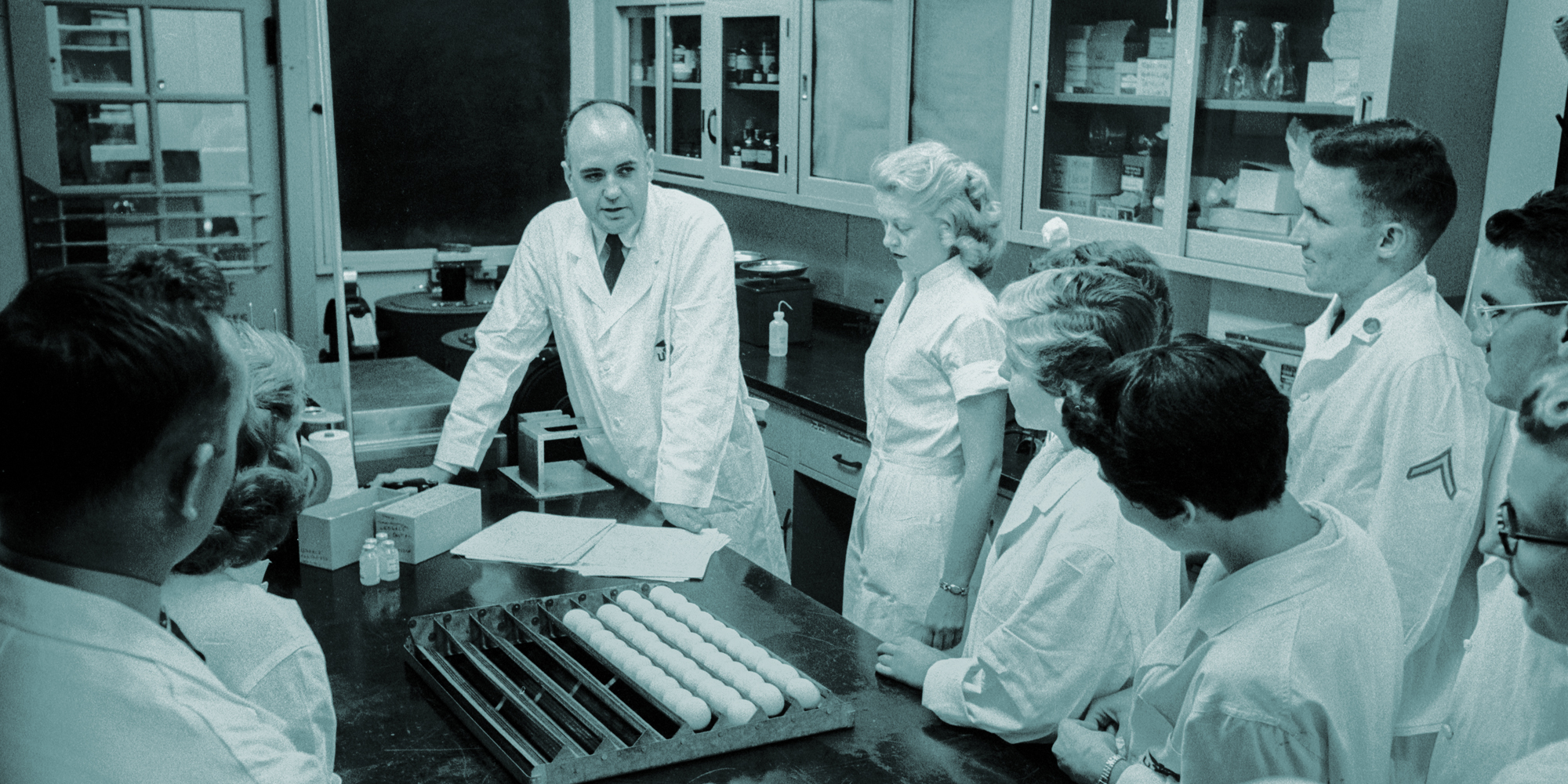 Maurice Hilleman, PhD’44, and his flu research team at the Walter Reed Army Institute of Research in 1957. Then (as now) scientists incubated influenza and other viruses inside eggs to produce vaccines. (Photography by Ed Clark/The LIFE Picture Collection via Getty Images)

The man who developed 40 vaccines

By
Author
Maureen Searcy
|
The University of Chicago Magazine
—
Fall/19

Maurice Hilleman, PhD’44, was born in 1919 near Miles City, Montana, during the deadliest influenza pandemic in history. When the next global influenza pandemic arrived, Hilleman was in the position to save thousands of lives, thanks in part to his Montana roots.

Before Hilleman, who died in April 2005, became the world’s most prolific vaccinologist, with a portfolio including vaccines for measles, hepatitis, meningitis, and more, he was a farm boy. His family sold fruit, poultry, and eggs to make ends meet through the Great Depression. He briefly worked at J. C. Penney, but his brother convinced him to apply for a scholarship to college.

After graduating first in his class at Montana State University and earning a doctorate in microbiology at the University of Chicago, he joined pharmaceutical company E. R. Squibb—much to his mentors’ chagrin. Chicago graduates were expected to become academics, he explained during an interview for Paul Offit’s 2007 biography Vaccinated: One Man’s Quest to Defeat the World’s Deadliest Diseases (Smithsonian Books). But Hilleman had had enough of the academy. “I came off a farm,” he said. “I wanted to make things!”

By 1944 Squibb had already developed a typhus vaccine for US soldiers. During his four years there, Hilleman helped develop and mass produce an influenza vaccine—an experience he drew on later, in 1957, when a flu epidemic broke out in Asia. Hilleman, by that time chief of the Department of Respiratory Diseases at the Walter Reed Army Institute of Research, recognized that the outbreak could grow into a pandemic. He knew he could help.

After isolating the so-called Asian flu virus, Hilleman tested it against the blood of hundreds of servicepeople and civilians. None had antibodies to the virus. He sent samples to public health organizations, which tested it globally. Only elderly survivors of an 1889 pandemic were immune. That virus was back—and could sweep across the world.

But the US Public Health Service and the military-based Influenza Commission dismissed Hilleman’s worries. They called him crazy, Hilleman told Offit, so he contacted six manufacturers directly, bypassing the principal American vaccine regulatory agency. When Asian flu arrived in the United States during the first week of September, as Hilleman had predicted almost to the day, vaccinations had already begun. By late fall, 40 million doses had been distributed.

The 1957–58 flu pandemic killed as many as two million people worldwide, about 70,000 in the United States. Some estimated a million Americans would have died without Hilleman’s vaccination campaign. The speedy response would have been impossible had he not advised: don’t kill the roosters.

From his coop-tending youth, Hilleman knew that farmers typically killed their roosters late in the hatching season. But making millions of doses of influenza vaccine requires millions of fertilized eggs to incubate the virus. Hilleman warned the manufacturers to notify their egg suppliers that the nation’s roosters would need to work overtime.

Virologists and chicken farmers have had a long partnership, forged in the 1930s when pathologist Ernest Goodpasture grew fowl pox, a smallpox-like virus, in fertilized eggs, which are cheap and internally sterile. The virus grew exceptionally well in the chick embryo membrane.

Flu vaccines have been made this way for more than 70 years, using eggs to replicate the virus before killing it. Hepatitis A, polio, and rabies vaccines are all inactivated viruses. Other vaccines are made from live, attenuated (weakened) viruses, which provide longer-lasting immunity. When grown in a series of nonhuman cell samples (often chick embryos), sometimes up to 200 times in a process called “passaging,” the strain mutates to thrive in those host cells while becoming less able to replicate in human cells—if at all. The weakened viruses are recognized by our immune system but can’t infect us. Measles, mumps, and rubella vaccines are made this way.

The first measles vaccine was developed by John Enders of Boston Children’s Hospital, who published on its effectiveness in 1961. Several pharmaceutical representatives immediately requested the Enders strain in order to mass produce a vaccine. Hilleman, who by the end of 1957 had joined Merck Research Laboratories, was one of them.

When Hilleman received Enders’s vaccine, he found the sample was loaded with a chicken leukemia virus. It had been contaminated by chick embryos used to weaken the measles virus. In the early 1960s, about 20 percent of the US chicken stock carried the cancer-causing avian leukosis virus (ALV). When Enders was developing his strain, there was no way to distinguish healthy from infected embryos.

Later studies found no connection between ALV and cancer in humans, but in 1961 Hilleman didn’t know that. Fortunately, the test he used to detect the virus—developed that year—also offered a way to breed ALV-free chicks.

Because he had chicken-raising experience, Hilleman attempted—and failed—to breed a clean flock at Merck. Then a fellow virologist told him about Kimber Farms in California, which had about 300 ALV-free chickens. Kimber’s director of poultry research, hesitant to hand over the farm’s research birds, sold the whole flock when he learned Hilleman was, like him, from Montana. The resulting measles vaccine, Rubeovax, was licensed to the US government in 1963. Merck still produces vaccines using eggs from that flock’s descendants.

With the contamination issue resolved, Hilleman turned his focus to Rubeovax’s side effects. The vaccine made many children ill, producing a rash and high fevers that sometimes caused seizures. It was “toxic as hell,” said Hilleman (a gentle expletive for someone famously profane). He alleviated some symptoms by administering gamma globulin, a fraction of blood from measles survivors containing antibodies, along with the vaccine—one shot in each arm. But giving two injections was a burden on doctors and children.

To reduce the side effects, Hilleman needed to weaken the Enders strain even further. He did so by passing it through clean chick embryos an extra 40 times. He named the weaker virus “Moraten,” for “more attenuated Enders.” (One reason Hilleman isn’t a history-book staple like Jonas Salk may have been his humility. His sole personal touch was naming his mumps vaccine the Jeryl Lynn strain, after his daughter, from whom he sourced the original sample.)

Licensed as Attenuvax in 1968, Moraten has been the only measles vaccine used in the United States ever since. In 1969 Hilleman created a rubella vaccine and combined it with his mumps and measles vaccine, licensing the MMR shot in 1971.

How did one person produce so many vaccines? It may have been his personality and management style, both of which tended to ruffle feathers. At a January 2005 symposium in his honor, Hilleman admitted that the best description of him had come from a former Merck colleague, “who said that on the outside I appeared to be a bastard but that if you looked deeper, inside, you still saw a bastard.”

Hilleman’s standards were high and his tolerance for mistakes was low. When he discovered Merck’s manufacturing division had tweaked his chemical inactivation process for the hepatitis B vaccine, creating the possibility of infecting children, he summoned the team for a legendary meeting, castigating them all as “goddamn meatheads.”

Employees unwilling to match Hilleman’s seven-day workweek were fired. A few had their likenesses made into shrunken head trophies for his office (carved from apples by his daughter Kirsten). Those who survived were fiercely devoted. But his demands could go further. In the late ’70s, Hilleman was developing his hepatitis B vaccine—the first and last derived from human blood. (It’s now grown in yeast.) Because of the inherent dangers, the FDA was reluctant to grant permission to test it. So he distributed consent forms to his staff requesting volunteers to try it out. When no one stepped forward, he said the forms didn’t have a “no” option. Joan Staub, an employee who took the vaccine, told Offit, “If Hilleman told you to do something, you did it.” Nine Merck employees conceded and later tested clean before the vaccine was cleared for broader trials.

While his professional behavior ranged from indelicate to likely actionable by today’s standards, he was supportive and loving at home according to Kirsten. And there’s no arguing that his work has saved millions of lives—and counting. Nine of the 14 routinely recommended pediatric vaccines are his, and some of the worst childhood diseases have been thwarted. Before retiring from full-time work at Merck in 1984, the foul-mouthed farmer defeated yet one more of them: chicken pox.