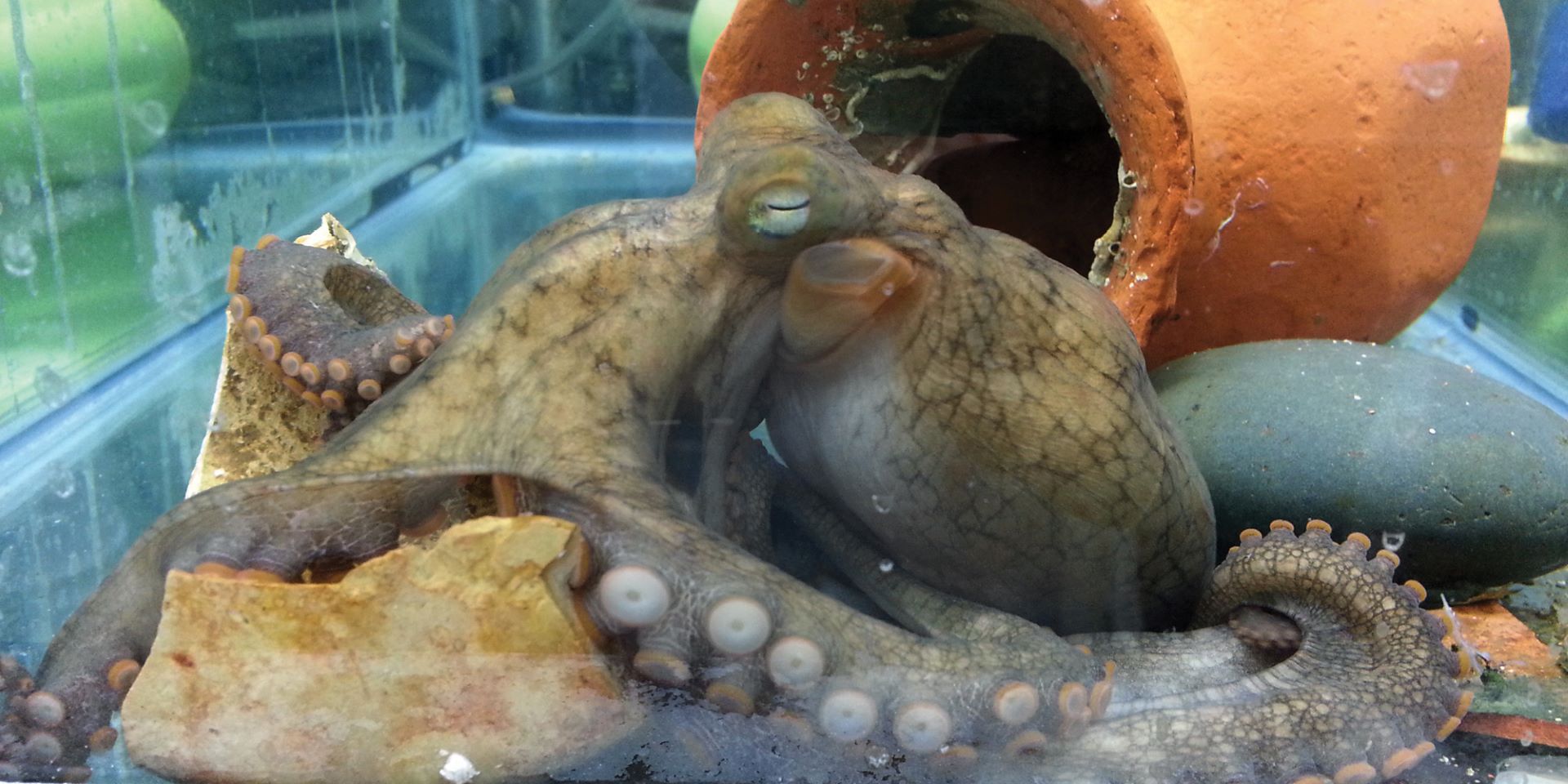 By
Author
Matt Wood
|
The University of Chicago Magazine
—
Winter/19

After a female octopus lays a clutch of eggs, she quits eating; by the time the eggs hatch, she will have starved to death. Like some other semelparous animals, the octopus is fated to die soon after giving life. The biological hows and evolutionary whys behind that fate, though, are not well understood.

Enter the female octopus’s optic gland. Functionally similar to the pituitary gland of most land animals, it’s named for its position between the eyes. In 1977, when psychologist Jerome Wodinsky removed the optic gland from female Caribbean two-spot octopuses (Octopus hummelincki), something interesting happened. The octopuses abandoned their eggs and resumed feeding, and some even mated again. Biologists surmised that the optic gland must secrete some kind of “self-destruct” hormone but could not identify it.

A recent study by neurobiologists at the University of Chicago belies the idea of a single such hormone, using modern genetic sequencing tools to describe several distinct molecular signals produced by the optic gland after a female octopus reproduces. “It’s the first time we can pinpoint any molecular mechanism to such dramatic behaviors, which to me is the entire purpose of studying neuroscience,” says Z. Yan Wang, PhD’18.

Wang, who led the new study, was part of a team directed by Clifton Ragsdale, professor of neurobiology at UChicago, that in 2015 sequenced the first full genome of a cephalopod. She and Ragsdale followed that work using the same species, the California two-spot octopus (Octopus bimaculoides), to examine maternal behavior. The researchers detail four separate phases of adult female behavior and link them to these molecular signals, suggesting how the optic gland controls a mother octopus’s demise.

In the first phase, before mating, mature females of the species are active predators, spending a lot of time outside their dens and pouncing on fiddler crabs and other prey. When they begin brooding, though, mated females sit like a deep-sea hen, stroking their eggs and blowing water over the clutch. For several days they rarely leave their eggs, snatching the odd unlucky crab only if it happens to get too close.

Then, in the fasting phase of motherhood, the octopuses stop eating completely. Eight to 10 days later, they reach the fourth and final phase. In rapid decline, the octopuses pale, become listless, lose muscle tone, and die.

Collecting the optic glands from octopuses at each phase, Wang sequenced the RNA transcriptome of each. RNA carries instructions from DNA about how to produce proteins, so sequencing it is a good way to understand gene activity and what’s going on inside cells at a given time.

When unmated females were actively hunting and eating in the first phase, their optic glands produced high levels of neuropeptides, small protein molecules used by neurons to communicate with each other. These molecules have been linked to feeding behavior in many animals. After mating, as the animals began to fast and decline, their neuropeptides dropped precipitously, and signaling activity rose in genes that produce neurotransmitters called catecholamines; steroids that metabolize cholesterol; and insulin-like growth factor hormone.

Wang says it was the first time octopuses’ optic glands have been linked to metabolism-related activity.

Just how these molecular and signaling changes cause behavioral changes is still unclear. Females in the early stage of brooding continued to eat but didn’t actively seek out food, possibly a sign that the neuropeptides affect the amount of energy the octopus expends to find prey. Certain muscles may begin to deteriorate so the octopus physically can’t hunt or digest food. The increased steroid and insulin production could be targeting reproductive tissues that promote maternal behavior, or they could be directing energy away from digestion and feeding.

“Before, when we only knew about the optic gland, it felt like watching the trailer to a movie,” Wang says. “You get the gist of what’s going on, but now we’re beginning to learn about the main characters, what their roles are, and a little bit more about the backstory.”

The scientific jury is still out as to why these clever, resourceful creatures meet such an ignominious end, but there are several theories. Octopuses are serious cannibals—females regularly kill and eat males during mating—so a biologically programmed death spiral may be a way to keep mothers from eating their young.

Octopuses are also among the animal kingdom’s “indeterminate growers,” which can grow indefinitely until death, so eliminating hungry adults keeps the octopus ecosystem from being dominated by a few massive elders.

“It’s very strange to see as humans, because we reproduce more than once and live way past our reproductive age,” Wang says. “But if the whole purpose of living is to pass along your genes, maybe it’s not so dark.”