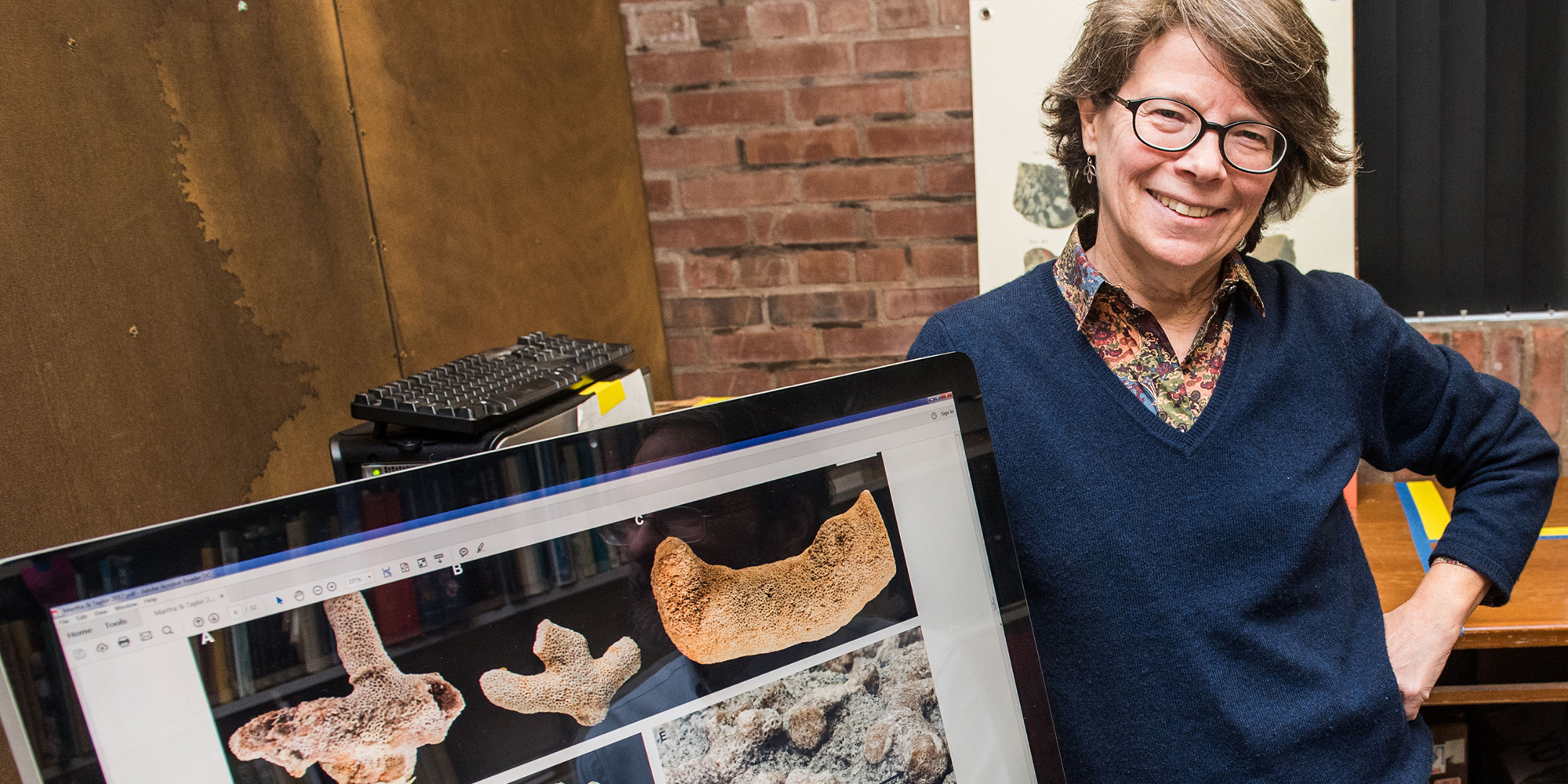 “Old field areas are like old friends,” says Kidwell, who returns to many of hers on field trips with her geological sciences students. (Photography by Jean Lachat)

Questions for geologist Susan Kidwell on her work in the emerging discipline of conservation paleobiology, teaching students out in the field, and what artists and scientists share.

By
Author
Laura Demanski, AM’94
|
The University of Chicago Magazine
—
Spring/18

Susan Kidwell, the William Rainey Harper Professor of Geophysical Sciences, has taught at the University since 1985. Generations of students have learned from her in the Core curriculum course Environmental History of the Earth and on field trips to California, the Bahamas, and other geologically notable destinations.

Trained as a field geologist, Kidwell has branched out in the past two decades to conservation paleobiology, an emerging discipline that uses the fossil record to understand environmental change. The work applies basic science to reveal what ecosystems looked like before human activity and other stressors took their toll. It brings her into partnership with ecologists, biologists, public agencies, and others to identify ways to restore environments’ natural states.

In a conversation with the Magazine that has been edited and condensed, Kidwell discussed how this work has also made her a part-time cultural historian, how field work trains young geoscientists to look, and what art and science share in common.

What is conservation paleobiology?

I would say it is using fossil records to give a longer time perspective on issues of conserving biodiversity and restoring habitats. It’s a relatively young field in that we’re just getting formalized, but people have been using fossils to give insights on endangered species for decades.

This work has become increasingly focused on using very young fossil records, just from the last few centuries to the last few thousands of years. So it’s a bridge. We’re working on species that are still living today. Mostly we’re looking to see changes in population sizes, in the geographic ranges of species that are still living today, but that we fear are waning or in peril of some sort.

How long has this been your focus?

I first got really involved around 2000. I was invited to join a research group evaluating the role of fishing, particularly overfishing, in the apparent collapse of coastal ecosystems.

It was a real introduction to ecology. I realized that I couldn’t continue to maintain this dual life of doing field geology work on old records, and also all this work on modern environments and modern processes, and that I should flip to working exclusively on these modern issues, where I could maybe help save the world. It is a very rewarding kind of work.

Yes. Geology is fun anyway because, I always say, earth sciences is a great field to go into when you can’t decide what kind of science you want to do. It includes everything—physics, chemistry, biology.

Conservation paleobiology is the next level because you’re interacting with cultural stressors and cultural history and taking the same very integrated, holistic approach. You consider the whole range of human activities that might have been affecting an ecosystem, as well as natural variables, and try to figure out what actually happened and what drove it.

The main thing I’m after is the sort of Holy Grail of conservation biology itself, and that is to figure out what systems were like originally, so that we can figure out what should be the targets for restoration. Which areas have changed, how have they changed, and what was natural really like? And then what, if anything, can we do to bring it back? At that point, you begin to hand it over to other scientists.

Tell us about the lost ecosystem you discovered off California last year.

It’s one of my all-time favorite projects. It’s such a picture of how science discoveries happen. My former postdoc Adam Tomašových and I were trying to establish how many years were represented by assemblages of dead shells in the seabed. We were using a method that dates individual shells to establish decades and centuries represented by the accumulations.

We had been focusing on various kinds of clams, but Adam realized that there were a lot of shells of a different kind of bottom-dwelling organism called a brachiopod, which also filter feeds but attaches permanently to the seabed. They settle as little larvae. If you have any sediment accumulation, they are toast.

Adam suggested we should date the dead brachiopod shells and establish how old they are. There are very few studies of brachiopods, but they’re important in the deep time fossil record. We thought this assemblage would date from the initial post–Ice Age rise in sea level, say 18,000 to as recently as 5,000 years ago.

What we found was that not only had these brachiopods been out there for all these thousands of years but they had persisted in abundance all the way up, basically, to the present—as recently as a couple hundred years ago. So what happened to them? Why aren’t they out there now? In 50-plus years of intense sampling by local biologists, they had not encountered any of these organisms alive. So that was wildly exciting, and we just stumbled on it.

What did happen to them?

We knew something about cultural history. It couldn’t be climate change, it couldn’t be waste water, it couldn’t be urbanization—these were all in the 20th century, but the brachiopods were disappearing in the 19th century. That’s when I realized, “Oh, my gosh, could it be cows?” It seemed so ludicrous.

And yet, it was cows?

In geologic literature, you sometimes run across a sentence saying the rate of sediment runoff from Los Angeles and Orange County watersheds must have been much higher during the mission era because of all the cows. But were there really enough cows to have done that? No one gave hard numbers. So I realized we were going to have to learn something about range ecology and sediment runoff, and first we needed a total number of cows to figure out how much sediment they could have caused to run off. Could it have been the right magnitude to do what had been done to the brachiopod communities? They’re buried in mud, and they do not tolerate mud. We figured “mudification” was implicated.

I imagined that the impact of cows is that they overgraze—they remove the vegetation and it’s not there to hold rain water, so the water runs off, carrying sediment. But when I tried this out on a biologist, he said no, the cows trample the ground and they compact it. Then when rain comes down, it can’t infiltrate, so an even larger proportion of the rainfall runs off the surface. Qualitatively the story fit, but it was quite a job to gather the data, model it, and determine that megatons of dirt per year were stripped.

The answer, published last year—we’re writing up the detailed version now—is that LA experienced a hundred years of soil loss, starting within a few decades of Spanish colonization, as livestock populations exploded toward 100,000. That unmanaged rangeland became 100 percent cropland by 1900. But once you no longer had pristine prairie with normal levels of animals grazing on it, you had muddy, sediment-laden water going into the sea. That was a real experience, becoming a little bit of a historian.

What are the larger consequences of the brachiopods dying off?

It wasn’t just the brachiopods. There were scallops, colonial animals called bryozoans, and other animals that couldn’t handle mud. It was a mosaic of shelly and sandy habitats with just small mud patches. So we had the extinction of an entire ecosystem that no one even suspected had been there.

We now have a legacy of widespread mud that is the new normal, and not something that can be removed. The 20th century brought new stressors like warming and waste water. Waste water has been turned back, and the ecosystem is recovering from that very nicely. But Adam and I know that it hasn’t recovered completely, because we know what the mud community looked like before.

We’re thus proposing that a fully natural ecosystem is not recoverable here. We should realize that with a sense of loss and a sense of accountability. But moving forward, what we can do is to get the best possible ecological services and aim to recover to the early state of those mud ecosystems. Our young fossil records tell us what these mud communities will look like when their part of the original ecosystem has recovered. People don’t think about fossils being used for such present-day issues.

You just returned from your latest field trip with geological sciences students. Where did you go?

I took 10 students to the Salton Trough in California, a tectonic basin that’s at the northern end of the Gulf of California. The Gulf is a very young ocean, with both seafloor spreading and San Andreas slip faulting, and has an exceptionally thick and well-exposed stack of rocks dating from the last six million years. It’s a fabulous range of paleo environments for students to ponder.

In the field you can help students develop a zoom lens approach to rocks and to the world. Geologists are always zooming in and out. We’re looking at landscape scale, we’re looking at hand specimen scale, we’re pulling out the microscope, and we’re doing the same thing temporally. We’re thinking now, in the past, in the super-deep past, and we do it automatically.

The nature of the world is different at different scales. No matter where you take someone in the field, it’s no longer a theoretical issue. They start exercising their eyes and their brain in this different way.

To the extent that you have free time, how do you spend it?

What I’m most serious about is gardening. When I’m not doing it, I’m reading about it and visiting botanic gardens and arboretums. I also love to go “arting.” There are very close ties between field geology and art. As geologists we’re looking at 3-D reality but need to express it in 2-D. Sometimes you can do that with a graph and do it mathematically. But a lot of our evidence is relational. We need to turn it into diagrams, which are abstractions. Another way of understanding what you’re looking at is to draw it.

I’ll never forget a big Monet exhibition I saw in London. It wasn’t until I saw that there were, like, 100 haystacks that I realized his work was so analytic of the interactions of light and other slight changes.

And of course science is like that. It’s a process of systematic discovery. It’s so much more creative than people realize, and scientists are more driven by passion than people realize. You can’t have the persistence it takes without the passion. I love seeing these other passions. People are going to make art whether they’re paid or not, whether they become famous or not.
This intellectual journey that true artists are on—you know, we all share it.