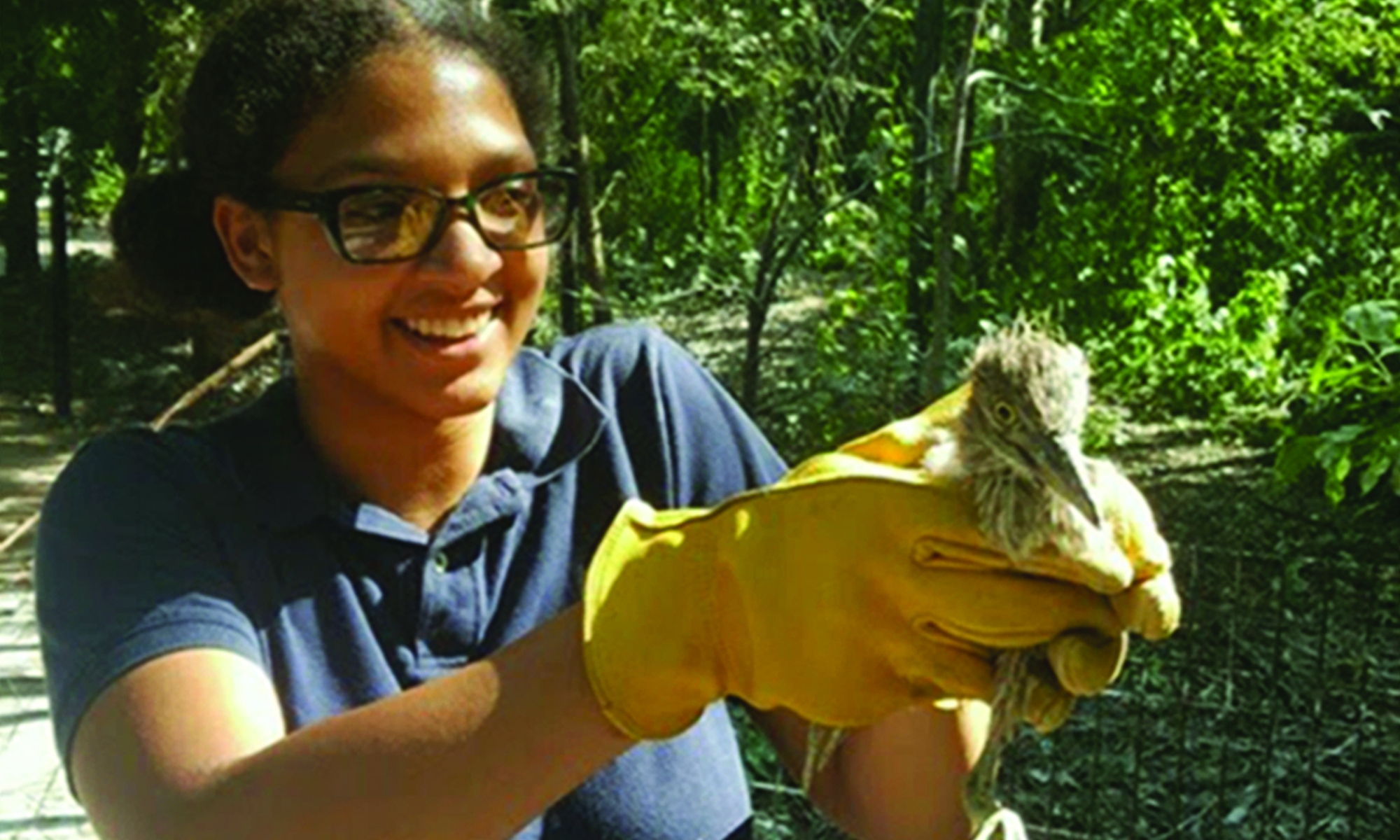 While working as an intern at Lincoln Park Zoo, Sativa Volbrecht rescued a juvenile black-crowned night heron (see this issue’s UChicago Creature) that had fallen out of its nest. (Photo courtesy Sativa Volbrecht, AB’20, SM’22)

Teach a kid to fish …

Sativa Volbrecht, AB’20, SM’22, wants to get young people hooked on a hobby.

Transporting 25 fishing rods and reels—plus bait, tackle, and promotional posters—is cumbersome. For Sativa Volbrecht, AB’20, SM’22, who doesn’t have a car and so took everything via CTA, it was a true mark of commitment.

“I wouldn’t recommend it,” she says, “but it did lead to some interesting conversations.” (Sadly, there are no pictures.)

A double major in biology and creative writing, Volbrecht was looking for a conservation-related job for the summer of 2021 when she saw a posting from the Illinois Department of Natural Resources (DNR): its Urban Fishing Program in Chicago needed a clinic instructor. Targeted toward children 16 and under, the program aims to increase interest in fishing and encourage more people to develop it as a lifelong hobby.

Volbrecht was instantly drawn to the idea. Before her family moved to the Chicago suburbs when she was 12, Volbrecht lived in Idaho, “literally in a valley with mountains on all sides.” They went camping every summer, and she’d fished both there and in Chicago.

The communication and education aspect appealed to her writer side. While at UChicago she cultivated an interest in science education through internships at the Lincoln Park Zoo and the Woods Hole Science Aquarium.

Volbrecht says that since scientific terminology can be intimidating, “it’s useful to be able to know how to break it down, particularly when you’re talking to children.”

Volbrecht’s job involved both “dry clinics”—presentations on the ecosystem held at a park, where students might learn to cast a rod but didn’t put a line in the water—and actual fishing clinics. Most of the children were elementary school–aged; only a few had been fishing before.

First, Volbrecht taught her students to bait a hook. “We have little worm strips for them to attach. Some kids don’t want to touch it, but I always try to give the kids the opportunity first.”

Next, they learned to cast the line, and if and when they caught a fish, they learned to hold it and release it—Volbrecht usually helped them take the hook out gently and place the fish back in the water.

She visited parks all over the South and West Sides, taking kids fishing at Jackson Park Lagoon, Sherman Park, Wolf Lake, on the Chicago River at Ping Tom Park, and other spots around the city. They caught bluegill and catfish, both stocked by the DNR. Often the younger children fished more successfully than the older ones.

“One of the things we teach them is, you have to keep your line in the water,” Volbrecht says. “They can’t catch if they’re not in the water.” Younger children “just wandering around” tended to comply, but older ones would get impatient and pull their lines out to see if anything had happened.

She says the biggest catch of the summer was “a pretty large bluegill.” Memories of fish size are notoriously unreliable, bluegills tend to be small—but active—fish, and any fish looks bigger in small hands. Still, Volbrecht confirms it was a fairly big fish. She adds, “They were very excited.”

She incorporated last summer’s experience into her master’s thesis at the Graham School, towards a degree in emergency threat response management for environmental security, and is working for the Urban Fishing Program again this summer. Ultimately Volbrecht hopes to work on environmental policy issues in the public sector. And while she misses the mountains, she hopes to stay in Chicago; strolls through the Burnham Wildlife Corridor tide her over between trips back West.