The Ténéré Desert (above) is a harsh mistress, as Tim Lyman (below) and the other veterans of Paul Sereno’s expeditions to Niger have discovered. (Photos courtesy Paul Sereno)

On a search for fossils, a doctor tends to the living.

I interviewed Tim Lyman, AB’74, SM’77, for an upcoming issue of Inquiry, the Physical Sciences Division’s alumni newsletter. (Although he is a physician, Lyman’s master’s degree is in physics.) As team doctor, Lyman has traveled to remote locations with the fossil-finding expeditions of paleontologist Paul Sereno, professor of organismal biology and anatomy and National Geographic explorer in residence.

One thing Lyman learned on his first trip with Sereno, a 2000 expedition to Niger, was that locals would come to the scientists’ camp seeking medical attention. In my interview with him, he recounted two memorable patients that he tried to help under difficult circumstances.

Tell me about treating the local Nigeriens.

Someone approached one of the head people on the expedition about having me come to a small village to see a woman who hadn’t walked, we were told, in several years. At first, the guy they approached told them it was too out of the way, and besides, he [Lyman] isn’t a miracle worker. 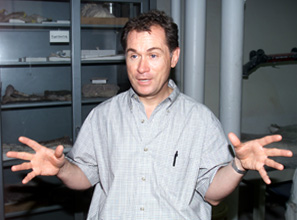 They kind of declined. He told me about it. At first I was kind of relieved, but then I thought about it and was really intrigued. I went back to him and I said, “If there’s any way we can do this ...” So we ended up doing it.

We went to this small village. It was just a collection of a dozen little huts out in the middle of nowhere.

[The patient] was a woman who hadn’t walked in almost two years, and she was lying on a mat. We had to use two translators: one from English to French, and one from French to Tamasheq, the native language. Every time I asked a question, literally, it took like five minutes for the answer to come back. It was very time consuming and Paul [Sereno] was getting impatient waiting.

I had a limited time to get a history, but I was watching her legs and everything very closely and the movements of her feet, toes, legs, anything. There was a baby there who started crying; it was her last child, which was about 18 months old. The old woman who had the baby sort of put the baby on the mat next to the woman.

She reached out, and I thought she was going to take the baby, but she pushed the baby away back toward the old woman, who picked up the baby again. I asked her permission to examine her first, and she said yes. I said that in order for me to listen to her heart and lungs, I needed her to sit on this low bed that was inside the tent.

And so she did. But I watched her movements—her legs and everything—very carefully as she did that. I turned to my translator, the expedition guy, and I said, “You know, that was half my exam.” I did the heart and lung thing, but I was actually watching her very carefully, and then I actually got her to agree to step outside the tent briefly in the sunlight to look at her eyes for jaundice. But really, I just wanted to see her move.

It became clear there was nothing neurologically wrong with her. You know what the diagnosis was? She had postpartum depression. But she literally had not gone outside that tent or walked since having that baby.

And that’s why she was pushing the baby away.

Well, that was a little clue to me, and then I started to ask about the timing of when this all started, what she was like before that, about the delivery and that whole thing, and it became clear that she was really depressed. It wasn’t a neurological problem.

So what did you tell her to do?

Well, under the circumstances, it was pretty difficult. Even if I had had antidepressants, they have dangers, and you can’t just leave them with someone in that kind of setting and leave, and then she would have no way to refill them anyway. So I really couldn’t offer that kind of assistance. What I started to do but didn’t have time to really finish was find out her support system, who was in the tent.

I threw out everybody who was in the tent, and the only people who stayed were this old woman and the translators, I think. I wanted to find out if it was her mother or her husband’s mother or who she was and stuff like that. So we did a little bit of that.

I was very careful at the end. I talked to my people, who talked to the guards, who were translating, to find out how the Tuaregs take care of someone with a diagnosis that they may perceive as a mental illness. I certainly didn’t want to leave her ostracized. I didn’t know. I was assured that they actually take very good care of all the people. I actually saw one baby who probably had some cerebral palsy. But they’re very good about taking care of their people.

So only with that assurance, we included her husband. We talked to them about the diagnosis. And it looked to me like she was somewhat malnourished. She looked a little pale to me; I figured she was probably anemic. But let me ask you: If I’m inside of this little hut and this woman hasn’t been outside the hut—for almost two years and she’s depressed, what’s the one thing you would think of to have her do?

Yeah. It’s the same thing that we all talk about, a seasonal affective disorder. I told them the prescription was, basically, they needed to get her up, preferably early, in the light, but not in the heat of the day, and she needed to at least get up and walk around the hut before she could go back inside.

Then I told him, “Over a period of weeks [you’re going] to increase that amount of time. Maybe every three or four days, increase it by another minute so that she’s just exposed to a lot more sun and this routine of getting outside the tent.” And then I told him to get some multivitamins and start giving them to her, especially with iron.

It was years later when I went back. Gee, when was it? It must have been just last December, I think. So this is almost a decade later. ... The guy who did the translating for me was there, too. Well, the story came back to me that for a while, actually, she was better; she was improved. But then she kind of lapsed into her own depression again after that. They lost track of her. It was kind of sad.

On that expedition of 2000, we rode into a tiny, isolated village way out. As we rode in, we stopped. Paul got out with his associate to sort of meet and greet the elders. He called me out of the vehicle and said, “Come here. I want to show you this.” There was a guy standing there with what was essentially a mixture, I think, of dung and mud pack, on his foot.

He said, “See that? He injured that. There’s an injury or sore there, and this is how they treat it.” So I looked at it and said, “Ah, it’s very interesting.” I got back in the vehicle and we drove on to our camp site, which was probably an hour outside the village."

The next day, Paul had to go into town. He comes back and he says, “Listen. You know that guy with the foot? They want you to look at it. It’s worse.” Well, with mud and dung on it ...

I went into town and I brought stuff with me, but I really didn’t have very much Novocain or lidocaine, and so I didn’t bring it. I didn’t want to use up what I had for the expedition. So I go to see the guy, and it turned out to be a lot more than that. They put me into this concrete one-room building, which I think they use for a school and community center.

There was a line of people—adults—outside waiting to see me. They would just come in and tell me their problems. It was very difficult. Nobody told me they were going to do this. And there were people around; there wasn’t really privacy, and there was no exam table. All I could do was sort of listen to their complaints and history and sort of tell them what I had thought, and maybe give some advice. I couldn’t really do exams, which would’ve taken a long time anyway, and there are no gowns. And I really didn’t know culturally to what extent I could physically touch women. Anyway, it was just complicated.

Finally, they show me the guy with the foot problem. Now, he is sitting in a chair outside this building, just on the dirt, and it’s infected; I mean, it’s badly infected and abscessed.

I had everything I needed except the Novocain, but I had scissors with me. I told him, “Tell him I have to open it up and drain it,” and I said, “This is going to hurt.” So they translate this to the man. Well, the man never said a word, but all these townspeople who had been standing behind me watching this all said, “Oh, that’s okay. Go ahead.” And the man didn’t say anything.

I actually had to cut the skin without any Novocain. I drained it, cleaned it, and made a wick with antiseptic and gauze and stuffed it in there, bandaged the whole thing up, and I put him on an antibiotic.

No, he never flinched. But then, of course, all the townsmen were standing behind watching this, so I felt sorry for the guy.

I gave him at least, I think, a week or ten days of antibiotics. And the report was he did fine; it healed up. But then he went out back into the bush.