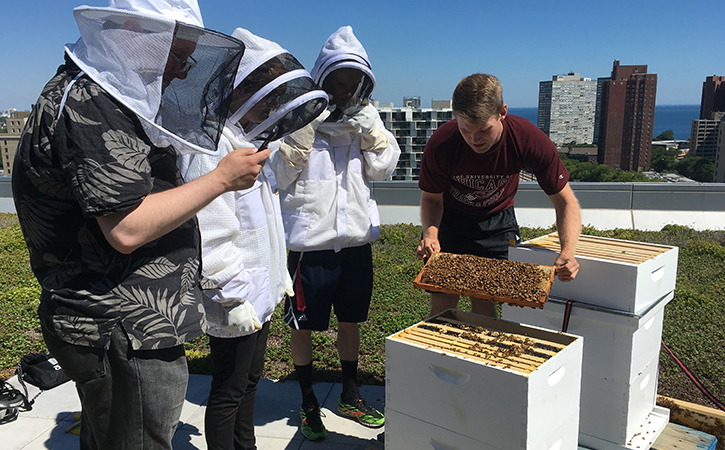 Meet some of the busy new residents of 53rd Street. (Photography by Kaitlyn Akin)

The “buzz of innovation”

How one Uncommon Fund project aims to bring urban beekeeping to campus.

Every Saturday morning, second-year Pritzker student Nick Lyon, AB’16, leads a group of volunteers through a noisy utility room on the 12th floor of Harper Court to the roof of the building. In the middle of the small terrace sit four stacks of plain white wooden boxes—the penthouse apartment of more than 130,000 honeybees.

Lyon and his cousin John Havlik, Class of 2019, lead the Phoenix Farmers initiative, an Uncommon Fund project that aims to bring beehives and urban gardens to rooftops across campus. Last winter they teamed up with Ryan Pierce, cofounder of the Analytics Lounge, a nonprofit community laboratory and a member of the Polsky Exchange, to create new technologies to make beekeeping easier and more useful.

In recent years, urban beekeeping has taken off across the United States and Europe. Because of pesticides, habitat loss, disease, and climate change, bees are at risk of colony collapse disorder, a phenomenon where the worker bees abandon their queen and disappear. Between 2006 and 2013, nearly 10 million bees disappeared, wreaking havoc for farms that relied on them for pollination.

“Anything that we can do to … increase the population and support the population of honey bees that pollinate plants in the city, the better,” Pierce explains.

One of Pierce’s primary goals is to create a network of hives across the Chicago area. With samples of honey from each hive, he explains, the Analytics Lounge lab can use mass spectroscopy to track minuscule amounts of pollutants from each area, allowing researchers to create a heat map of contaminants—although Pierce assures me that they have “no concerns whatsoever around the safety of humans consuming the honey.”

Pierce also wants to try installing audio recorders in the hives to track noise levels and detect swarming before it happens. This could be especially helpful for beehives in densely populated areas like 53rd Street: just weeks after the hives were installed, a subset of the bees began to swarm. Luckily Lyon and another local beekeeper quickly caught the swarm and placed it in a new box without any injuries.

In order to monitor swarming behavior and care for the bees, Lyon checks them weekly—and invites any students interested in learning to keep bees to join him.

“The way you learn beekeeping is you just keep coming back,” Lyon says.

The morning I visit the bees, seven others have come to help, including Havlik and Pierce. As the more daring beekeepers in training don their uniforms, fiddling with complex combinations of velcro and zippered openings, Lyon explains the setup.

The four hives are made up of a series of wooden boxes. Each box houses nine frames where the bees can create comb, lay eggs, and store honey. Lyon guesses there could be anywhere from 100,000 to 190,000 bees in total. Next year, Lyon estimates, these bees could generate 40 to 50 pounds of honey. The Uncommon Fund is not meant as capital for new businesses, but Lyon anticipates that selling honey could provide funding for future years of beekeeping.

Each student has a chance to use the hive tool—a small, flat metal bar—to pry out one of the frames and examine it. On one, cells full of finished honey are covered in wax. On another, Lyon points out tiny eggs inside some of the cells.

Lyon flips through the remaining frames, checking that everything is in order and volleying off answers to questions from the group. What is the purpose of a drone bee? (Reproduction and not much else.) How do you know which one is the queen? (She’s bigger, and usually marked with paint.) Is a hive like a collection of individuals, or is it more like one organism? (Lyon couldn’t answer this one—it’s up for debate.)

Standing on the roof, surrounded by more bees than I’ve seen in my entire life, I feel surprisingly calm, even without the safety equipment on. Unlike wasps or other standard-fare picnic fiends, the honeybees seem content to go about their business, unconcerned with the beekeepers meddling in their homes. Pierce gives the hives a generous puff of smoke as Lyon and the students work, which confuses the bees and makes them less likely to sense danger. Lyon himself seems wholly at peace, handling the frames without any gloves—despite his allergy to bee stings.

After nearly an hour of working with the bees, the novice beekeepers file out, leaving Lyon, Pierce, and Elizabeth Koprucki, assistant director of the Polsky Fab Lab, to finish the check. The swarm hive, still settling into its new home, needs a bit more TLC than the others. Lyon notes that the bees are struggling to make enough honey and eggs, so he leaves them some extra snacks: a mason jar of sugar water and a “protein pack” laid on top of the frames.

Lyon and Pierce carefully stack the hives once more and tighten the heavy-duty straps around them, securing a bucket of water to the top of one for the bees to drink. Lovely as the view may be from the 12th floor, the Chicago wind can make it hard to keep beehives upright, and it would be bad for everyone if the hive were to plummet off the roof and onto the streets below.

But for now, the bees are safe and well tended, with a big future ahead of them. Although they can’t harvest honey from these hives until next year, Pierce is in contact with other beekeepers to start analyzing honey samples from around the city. And each week,Lyon brings more new students to the roof, teaching them the ropes and spreading the word about the importance of urban beekeeping. In the Magazine’s office, sitting seven floors beneath the hives and looking out on a lush greenery-filled Hyde Park, I understand why.