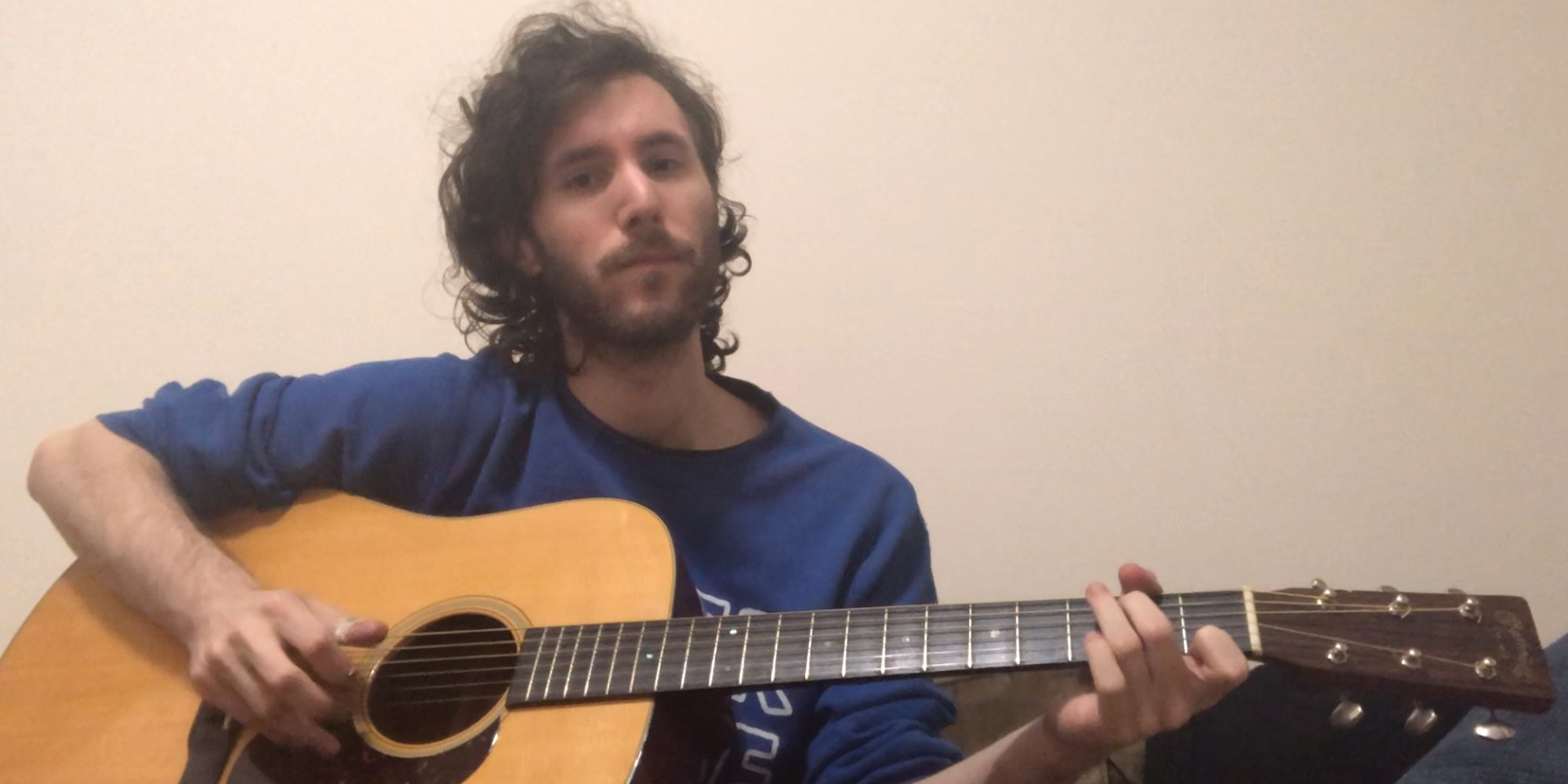 Eli Winter, AB’20, documented Spring Quarter 2020 through essays and guitar music. Above, a still from a YouTube video of Winter playing an untitled song “written for Augusta Read Thomas in the midst of a three-and-a-half month stretch when I was largely alone in quarantine.” (Video still from Eli Winter, AB’20)

Musician Eli Winter, AB'20, had planned a concert tour of the United States and Europe after graduation. Then came the pandemic.

This article is part of the special feature “A Spring Quarter Like No Other,” which chronicles the experiences of eight College students. Eli Winter, AB'20, remained in his off-campus apartment during the quarter.

I’m writing this at four in the morning. I couldn’t sleep—as usual—and got up when I heard a siren. Every time I hear one I think it’s an ambulance, and they come at all hours.

I’ve been given questions to answer. Some feel unanswerable. How did I get here? What was the hardest thing to do? Not was—is.

The easy ones first. I was with a friend at Jimmy’s. I’m still in Hyde Park. Of course I thought it might be a threat, not that it would be one.

A bit about me: I work as a musician, as I have for a few years; I’m in my last quarter as a fourth-year studying nonfiction; two months ago, most of what I knew about the virus came from concerts. I went to two on back-to-back nights. The first, two local bands played a packed bar. The second, a bigger touring band played a bigger room, but the crowd was thin. I talked with local musician friends with shows on the books suddenly struggling to decide whether they should cancel. “I don’t think you grasped the severity of this,” a friend wrote me. It’s not that I didn’t get it; I hoped, like I think my friends did, it would stay in the conditional.

At first—maybe just for a moment—I thought canceling classes was an overreaction. I didn’t want to go home. Maybe it’ll blow over soon. When the music starts, where would you rather be? Rather, my parents are old: my mom, 62, a preschool teacher; my dad, almost 70, a doctor and lifelong asthmatic. Even though I’m living alone, and have for about three weeks, I can count all the times I’ve left my apartment on one hand. Friends implore me to go for walks, send me reports and statistics as if to say, See, it’s safe, you can go outside, it’s OK, and I stay in, terrified of catching it and suffering by myself, or—worse—transmitting it without knowing. On good days, a friend who lives in my building raps my window and we talk through the glass.

In an alternate timeline I’d have planned three months of fall concerts in the United States and Europe; now I’m enraged at people who travel when they don’t need to. I leave the apartment for essentials, masked and gloved; when I see people without, I want to clobber them from six feet away. I observed a Zoom Passover seder with family and friends and felt ghostly.

The hardest thing to do is a constellation of hard things. The pandemic impacts everything; everything is hard. Or feels hard, but it is. Ambient dread.

As for before: I miss my friends. I miss the places I have felt welcome. I miss smelling weed on the sidewalk. I miss the radio station and shorter hair and overpriced doughnuts. I miss touch. I miss not waiting for the other shoe to drop. I am grateful for those moments in which a person is not so aware that they are living through history.