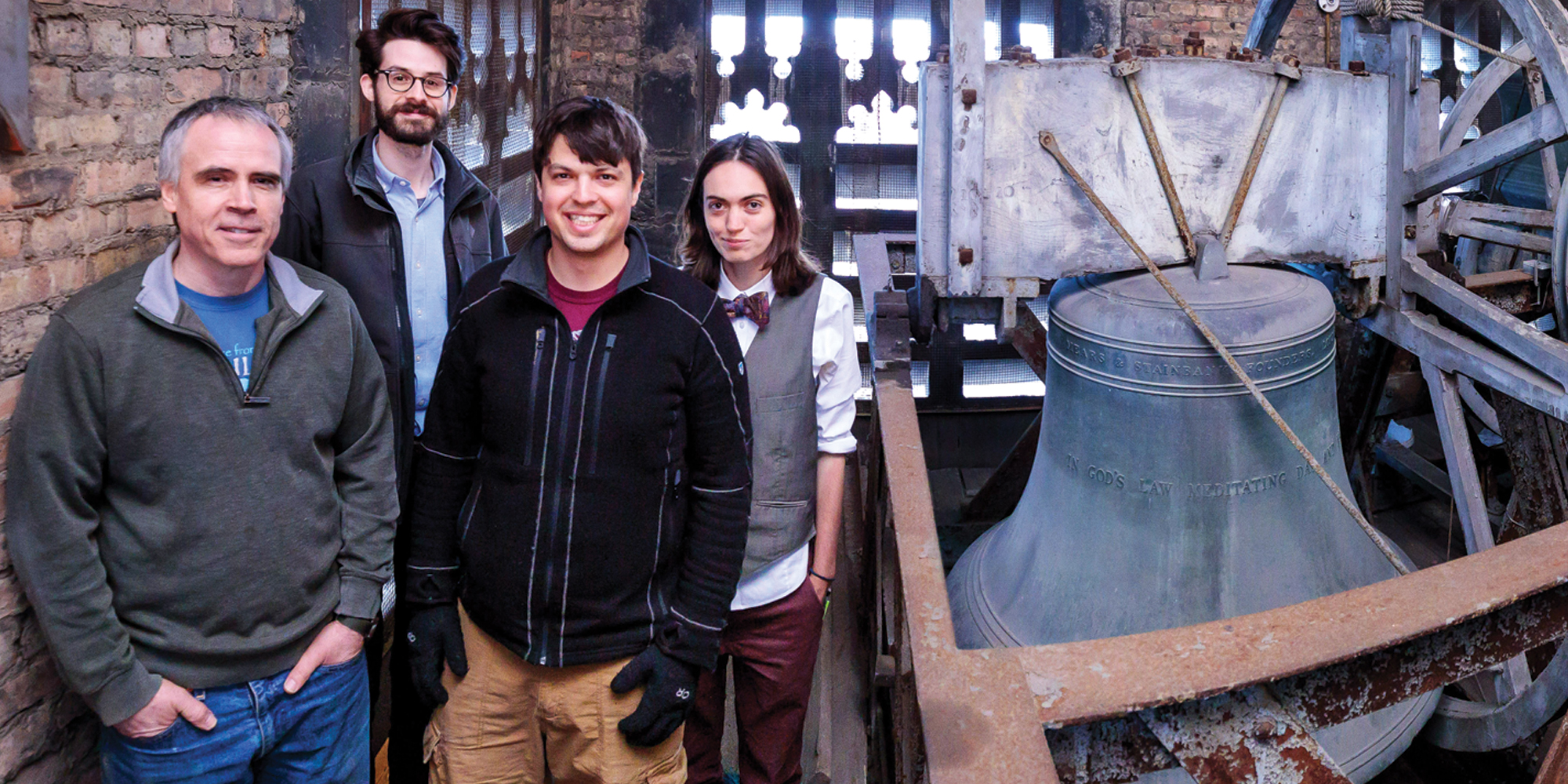 The bells of Mitchell Tower have inspired, or irritated, Hyde Parkers for more than a century.

The installation of the Alice Freeman Palmer Bells in the Reynolds Club’s Mitchell Tower in 1908 delighted much of the campus community. Athletic director and Yale alum Amos Alonzo Stagg donated some money toward the bells’ installation and upkeep, in part because of his fond memories of the bells in Yale’s Battell Chapel ringing at ten o’clock each night. Stagg requested a similar “good night chime” in Hyde Park for the University’s athletes, “to speak to them of love and loyalty and sacrifice for their University, and of hope and inspiration and endeavor for the morrow.”

But, as with everything at UChicago, there were mixed reactions. An anonymous letter received later that year complained about the “miserable clanging bells,” calling them “a damned nuisance” and warning, “there surely will be an uprising in the neighborhood and an endeavor made to have your unseemly ding-donging stopped for all time.” (Read the full letter.)

As the uprising did not materialize, the ding-donging did not stop. Today, however, the UChicago Guild of Change Ringers limits its audible ringing to daylight hours once a month. The group’s motto: Crescat campanologia (campanology meaning the study of bells).

Change ringing is most common in England, where it’s been practiced for centuries at churches, schools, and other institutions. Bell towers for change ringing usually have six to 10 large bells, each rung by one person pulling a rope. Like the tower at Oxford’s Magdalen College on which it is modeled, Mitchell Tower has 10 bells.

Change ringing doesn’t produce recognizable melodies as much as patterns: bells, each at a different pitch, ring in different sequences, organized in different combinations. The sequences change—hence the name. A signal achievement in a change ringer’s career is to take part in a peal: 5,040 changes rung on six bells, running through each of the 720 permutations seven times in varying order. A peal takes about three hours to complete and requires intense concentration from all participants.

It’s the combination of teamwork, mental focus, and artistry that draws change ringers like UChicago guild president Isabella Scott, SM’18, a graduate student in math who started change ringing as an undergraduate at the University of St. Andrews in Scotland. The bells were a factor in her decision to pursue her doctorate at UChicago.

Prospective ringers don’t need any special skills, but ringing does take practice. Novices learn timing on hand bells. “It was a couple of months before people were comfortable letting me ring a tower bell,” Scott says.

The most common mistake new ringers make is to look up when they’re ringing. In Mitchell Tower, as elsewhere, the bells hang above a ceiling and are not visible to the ringers as they’re moving. But also, because change ringers work as a group, Scott says they need to be able to make eye contact as they ring.

During UChicago’s practices, held Monday evenings, the bells are silenced—their clappers are immobilized, but a sensor on each bell activates a computer-simulated chime so the ringers can hear it via speaker. The bells ring “open,” audible to the surrounding area, between noon and 1 p.m. on the first Saturday of each month. Peals are rare at Mitchell Tower: the first took place March 22, 1975, and tower master Tom Farthing, who trains new ringers, estimates it’s been at least 10 years since the last one.

With only 42 towers in the United States—and just three in the Midwest—guild members have driven up to seven hours to ring in Mitchell Tower. But Scott hopes to attract more participants closer to home. She’s working on a change ringing talk geared toward undergraduate math students, drawing on her work studying dynamical systems.

That mathematical rigor helped lure Greg Watson, AB’92, who began ringing as a first-year after hearing about the bells during Prospie Weekend. He enjoyed “the different patterns and different rules of how you move through the changes. You have these constraints in a way: How do you get to different combinations without repeating or without breaking the rules?” As a nonmusician, he also says it was his only real opportunity “to make a lot of noise publicly.”

Once Watson started, he was hooked. He’d ring while home on breaks in the Washington, DC, area, which has four bell towers. One of the few College students to study abroad in those days, he spent his third year at the London School of Economics and joined the University of London Society of Change Ringers. With several bell towers in the London area, on Sundays the group often did a circuit of different churches.

Watson is still ringing 31 years later—he has rung across the United States and Canada, as well as in Great Britain and as far as Sydney and Adelaide, Australia. A nonringing family and a full-time job as a health care policy consultant in Northern Virginia limit him to a couple of times a month nowadays.

A highlight for him was ringing at St. Bartholomew the Great back in his London days, with its original bells reputed to be from 1510. Although the English ringers were used to ringing bells that old or older, Watson still marvels at the idea.

“How many other things can you use that are several hundred years old,” he says, “that you’re using for their original purpose in their original way?”