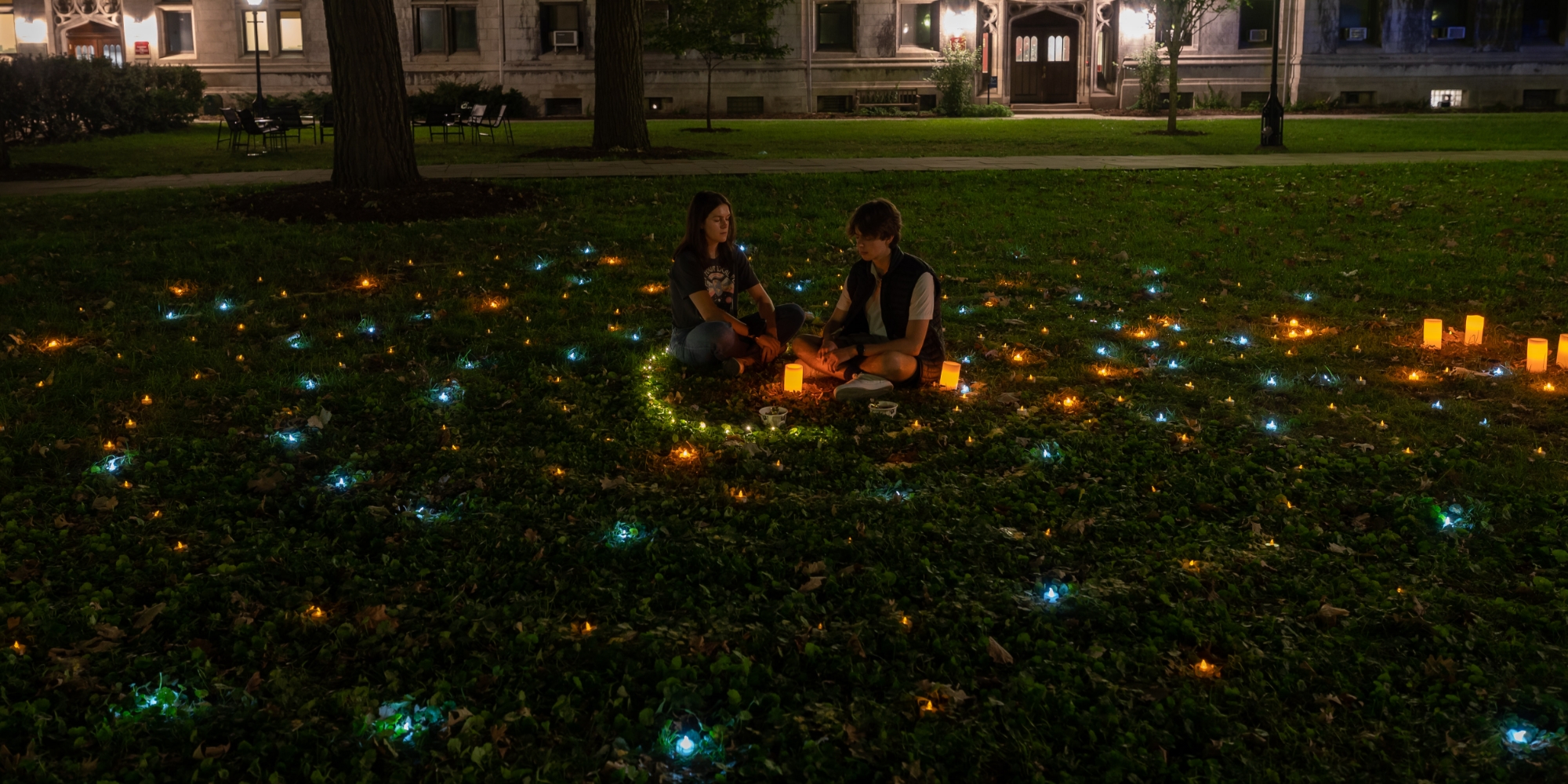 Students sit at the center of the Late-Night Labyrinth during Orientation Week 2021. (Photography by Jason Smith)

How to make a labyrinth

A temporary version of an ancient design to help students be in the moment.

Once or twice a year, Rev. Stacy Alan creates a labyrinth on the quads for students and other passersby to walk through. Alan started the tradition in 2005, shortly after she became chaplain of Brent House, the Episcopal Center at UChicago. In recent years, the Late-Night Labyrinth has become part of Orientation Week programming, usually scheduled after the Aims of Education address. In an interview with the Core, Alan explained the fundamentals—and complications—of making such a space for contemplation.—Carrie Golus, AB’91, AM’93

Sometime in the 1990s labyrinths came onto the stage, at least in my circles in the Episcopal Church. The parish where I were before I came to Chicago—St. Luke’s in Kalamazoo, Michigan—had a canvas labyrinth. Every couple of months we would put it out and have a prayer service. I loved the way that labyrinths are accessible to all ages. I remember my son at age three very carefully, quietly walking the path.

When you walk a labyrinth, you intentionally disorient yourself in a controlled way. You can’t get lost. It’s not a maze. There’s only one path. But once you start walking it—even the simple labyrinth that we do at UChicago—you can’t calculate the distance from the center or the beginning. You can’t get caught up in where you’ve come from or where you’re going. You have to be absolutely in the moment.

When I came to interview at Brent House, I remember thinking that the quads would be a lovely spot for a labyrinth. But it was more complicated than I thought. Canvas is not great for outside, and painting a labyrinth involves a lot of effort. The labyrinth that most people think of is the one on the floor of the cathedral at Chartres. It’s beautiful, and it’s really hard to draw.

Eventually I got connected with an architect, Ben Nicholson, who has been doing work on labyrinths for a long time. He gave a presentation at Brent House about labyrinths, mathematics, the myth of Theseus and the Minotaur. He said things like, “Eleven is an uncomfortable number.” I’m not even sure what that means, but I’ve thought about it for years. Then he helped us make a Cretan labyrinth out of Styrofoam cups in the living room. And that’s the pattern we’ve used ever since.

The next challenge was what to make it out of. We needed something biodegradable. We practiced on our lawn at Brent House—we tried flour, we tried grits, and we finally chose cornmeal. It’s just heavy enough to stay put, but not so heavy that it’s unwieldy. It takes maybe 30 pounds.

Five or six years ago, we decided to try it at night. For the Late-Night Labyrinth, we draw it in cornmeal. Then we highlight the outline with battery-operated tea lights.

To make a Cretan labyrinth, you start by drawing an equilateral cross. Next you draw a right angle in each of the quadrants and put a little dot in each of the angles. (You can add more angles, if you want a more complex labyrinth.) Then you draw curved lines to connect the dots and lines to make the path.

It takes some coordination. If people get too excited, we’re going to misconnect things, and the path won’t take you anywhere. Oftentimes about three-quarters of the way through, you start to wonder if it’s right, because even the process of making a labyrinth is a little disorienting. In all the years that we’ve done this, we’ve gotten it wrong only once.

We like to have people at the labyrinth to explain what’s going on. We assure the students that they won’t get lost. You can’t do it wrong, you can’t break it. You can engage with it in whatever way you choose.

But there are some traditional practices. For example, a labyrinth can be used as a form of discernment. If there’s a question you’re asking yourself, you can hold that intention as you walk in. The strange thing about walking a labyrinth is it’s almost soundless. Once you start walking, the world outside falls away. When you get to the center, you meditate for as long as you feel you need to. Then as you walk out, you reenter the outside world, perhaps with a new perspective on the question.

One of our innovations has been to have cookies in the center. That’s not traditional.

We also have some handheld labyrinths, about the size of an index card. You can use a stylus or a finger to trace it. So if walking is an issue, you can do that instead.

The labyrinth lasts a couple of days, until it biodegrades or the squirrels eat it. The squirrels are very interested whenever we’ve done a labyrinth during the day. The first time we did it, a squirrel fell out of a tree onto the labyrinth—it probably dropped 25 feet—and landed right behind someone who was walking. She nearly jumped out of her skin. The squirrel just shook itself and looked around like, “I meant to do that.”

One of the things I love about my work is I’m continually engaging with people who have lots of questions. The labyrinth is a particularly useful practice for questions. There’s just something about intentional walking in circles. It gets at something really deep.