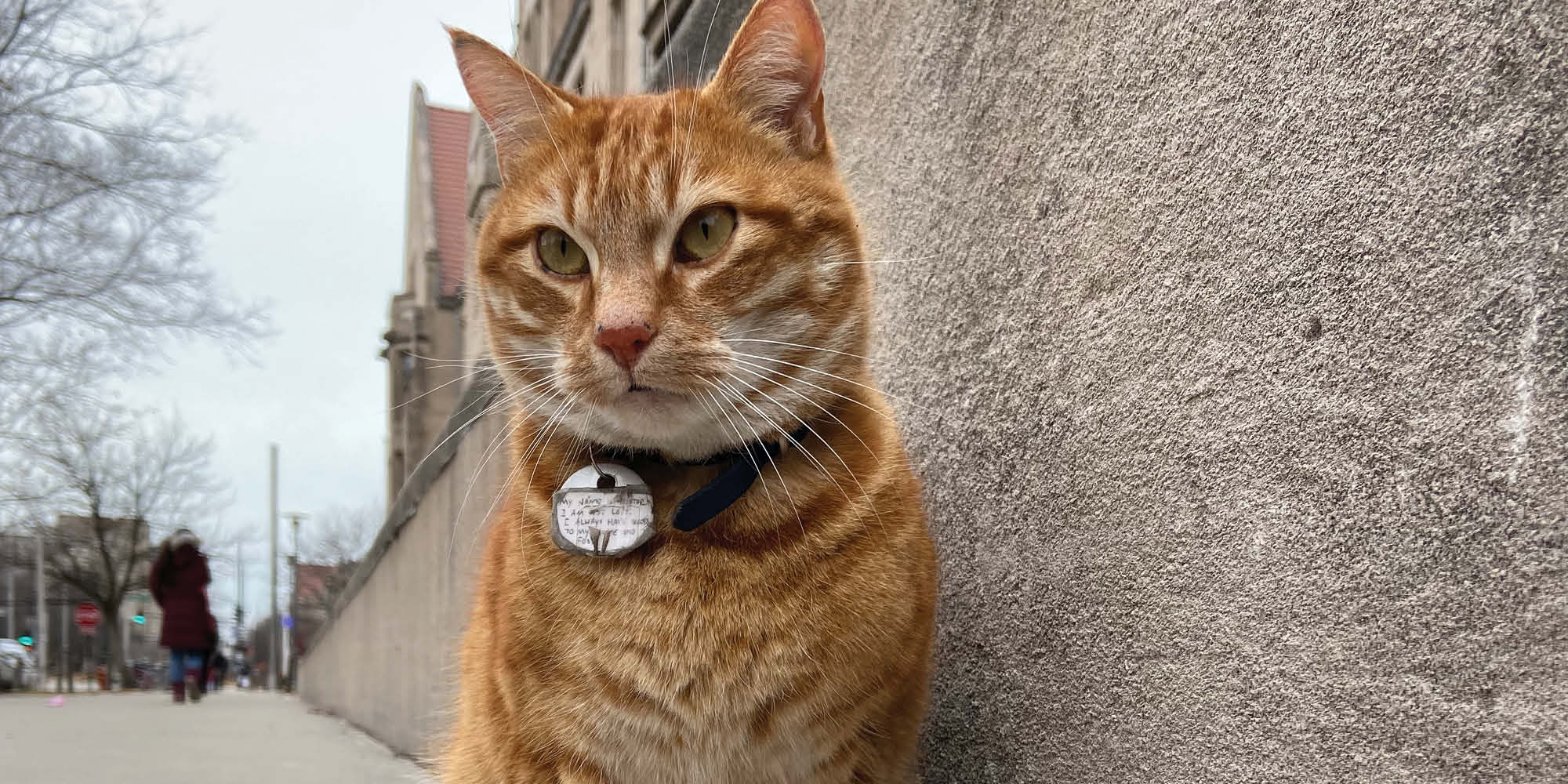 Nestor and his battered tag, which states that he is not lost. (Photography by Devon Wenzel, Class of 2022)

During pre-orientation in 2018, Devon Wenzel, Class of 2022, glimpsed an orange streak. It was Nestor, a friendly, free-roaming tabby from Amsterdam. He was brought to Hyde Park by his grad student owners, Rik Peters (classics and social thought) and Thalia Lysen, AM’17 (Hittitology).

Wenzel loves cats and taking photos of cats, even though she is so allergic she once ended up in the hospital. She set up a fan Instagram page, @nestorthemidwaycat, and began posting pictures almost daily. Nestor lolls on the pavement, lurks outside Cathey Dining Commons (where students often would wait in line to pet him, Wenzel says), raises his paw for a fist bump, makes prints in the snow, and occasionally climbs trees. One photo shows him outside the Smart Museum, a mile from his South Campus home.

Wenzel last saw Nestor in person in March of 2020, when the pandemic hit; he’s now back in the Netherlands with Peters and Lysen. Although they will travel to Hyde Park occasionally until they graduate, Nestor will not accompany them, Peters says.

Wenzel’s Instagram notes he has returned to the “Nestorlands,” but she still posts photos every few weeks for her 2,000-plus followers. “I probably have over 5,000 pictures of Nestor on my phone,” she says. “I could post for years and never run out.”

In Hyde Park, unlike the Netherlands, outdoor cats are rare, and Nestor was reported by concerned cat lovers many times. So in addition to a GPS tracker on his collar, his owners added a tag with this message on one side:

And on the other:

I go on adventures on 61st St. and campus
Please do not feed

Nestor’s student fans particularly liked the part about going on adventures. “They at some point talked about making a line of T-shirts with that text,” Peters writes in an email interview. “I personally have always been very fond of the line ‘I always have access to my home and food.’ This is something I now tell myself for comfort when times are tough.”