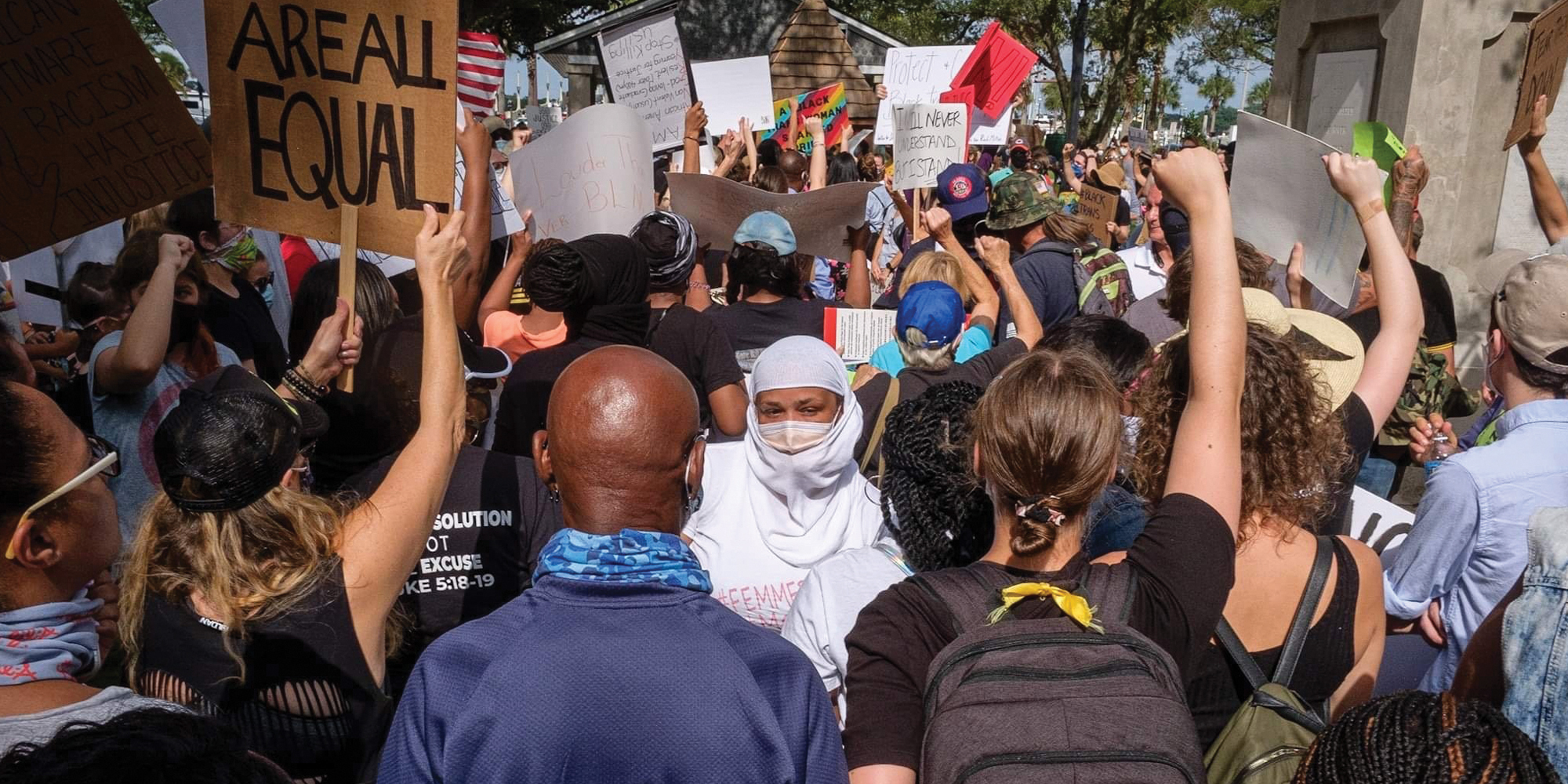 After the killing of George Floyd, Black Lives Matter protests—like this one in St. Augustine, Florida—were organized in every state in the nation and in cities around the world. (Photo courtesy Rev. Ron Rawls)

A third-year was terrified of catching COVID-19. He went to the Black Lives Matter protests anyway.

This article is part of the special feature “A Spring Quarter Like No Other,” which chronicles the experiences of eight College students. Elijah Smith, Class of 2021, spent the quarter living with his family in St. Johns, Florida.

Not actually, of course. But it’s hard to remember that. Two and a half weeks ago, I was at my sister’s graduation party, freaking out over the 10 people in attendance and just about losing my mind when they hugged anyone. Proximity felt like a threat.

But then earlier today, I was shoulder to shoulder in a crowd 10,000 strong—the largest protest in Jacksonville, Florida’s history. What’s almost weirder is that I didn’t care. I had absolutely zero panic attacks.[1]

How could we possibly have gotten here? If you’d told two-and-a-half-weeks-ago Elijah that he’d be doing these things … well, his only way of processing it would be, “I will stop believing in the coronavirus and start going to the reopening protests. Apparently.”[2] The actual course of events—the 2020 Black Lives Matter protests after the murder of George Floyd by four Minneapolis cops—wouldn’t even have occurred to him.

At most of the protests I went to, the cops blocked off a short, inoffensive route. Once, at a march organized by Jacksonville mayor Lenny Curry to congratulate himself for taking down a Confederate statue, the cops went as far as telling us, “That’s enough.” We turned back. I’m not sure if that “protest” even counted as one.

The most meaningful demonstration was in St. Augustine, about 45 minutes away. Called Standing in Strength, it was led by Rev. Ron Rawls of the St. Paul AME Church. The destination: “St. Augustine Slave Market (the plaza),” according to the event announcement.

We occupied the highway, rather than the sidewalks. A counterprotester drove his car into the crowd. The guy didn’t drive very quickly into us—just swerved into the protest, made a few people jump back. No one was hurt, thankfully, though of course the cops didn’t do anything.

I’m back in Chicago now. In Jacksonville, BLM protesters were planning on tearing down the Confederate monument that the cops were guarding, if the city didn’t; I hope they did.

So. Yes. I suppose I don’t have more to offer you than “We processed these two giant things by never ever holding them in tandem and by allowing our minds to put them in neat little boxes.”

Living through history is exhausting.

[1] Excepting the ones I had when I saw a cop. These were super mild, though. Also, I was wearing a mask. Just want to clarify that.

[2] This is not what happened.