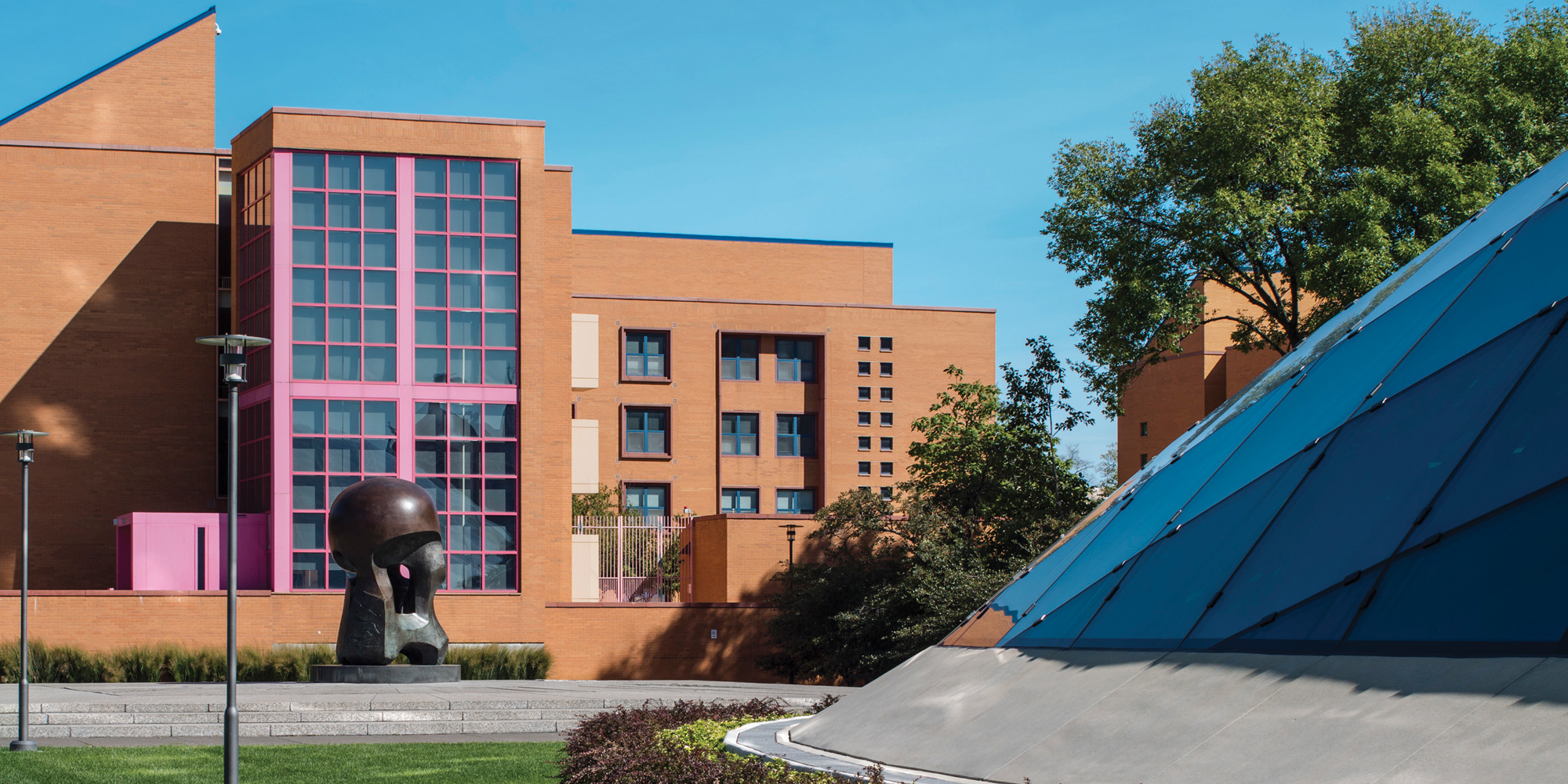 Max Palevsky Residential Commons, where students who remained on campus during Spring Quarter 2020 were housed, one person to a room. (Photography by Tom Rossiter)

The Ones Who Stayed

What’s it like to live on campus when everything is closed and almost everyone has left?

This article is part of the special feature “A Spring Quarter Like No Other,” which chronicles the experiences of eight College students.

Xavior Lewis, Class of 2023, was one of 125 students who remained on campus during Spring Quarter. Students were housed in Max Palevsky Residential Commons, one person to a room. All common areas and dining halls were closed; meals were to-go only.

Lewis interviewed two other Max P residents, Emily de Vegvar and Alice Tay, both Class of 2023, about life on a ghost campus.

How are you doing?

What do you usually do to pass the time, besides naps?

Scroll through the internet, to be honest. Watch TV. Read.

Where were you when you found out Spring Quarter would be remote?

I was in the house lounge and everyone was freaking out. People were shook. Some girls were crying. Spring Quarter was something we’d been looking forward to. It felt like we were robbed of something.

What did you personally feel robbed of?

What was the process of getting settled into your new situation?

I stayed for an extra week in South [Campus] while everyone left for spring break before moving to Max Palevsky.

Why did you stay?

A combination of reasons. I felt like I would be going back in time if I had gone back home. To a high school time, except I’d be unable to leave the house. I felt like going back to London would revert me back into that older version of myself.

How have your social connections been during quarantine?

Good. I hang out a lot with my friend Alice [Tay]. We decided we would stay if the other person stayed. We see ourselves as self-isolating together. So I spend a lot of my meals with her. I’ve met some other people, and we all have [socially distanced] meals on the quad.

What was the hardest part of this transition?

To see all of my friends go. Gradually they all just trickled out. Helping my friends pack, and getting last meals and everything.

When is this all going to end?

I don’t think we’re going to get normal back for a very long time, or ever. Hopefully we will come back in October, but it will be different. No parties, no letting other people into dorms, maybe they’ll have students in hotels.

I’m scared about people being able to go to crowded spaces. I think that especially young people—we really enjoy that and it’s really good for social interaction. I also worry that kids growing up now will get too used to social distancing and that may affect their mental health long term.

What would you want future historians to know?

When we study past historical pandemics and wars, I don’t think we ever think about how much it affected people’s daily lives—how difficult it is for your life to be disrupted.

Tell me something interesting about you.

Well, I play the piano.

Have you been able to play recently?

Unfortunately, no. They’ve closed off all the practice rooms and common spaces.

How are you doing with quarantine as a whole?

Pretty well. I do think being in Max P was the right decision for me, because had I gone home, I wouldn’t have been allowed out of the house.

I grew up in Malaysia, but I studied in Singapore and I’d go back and forth. I miss all my friends like everyone else does, but there’s no FOMO [fear of missing out] because no one’s with each other now.

I totally get that. What has been a hard transition?

Discussion-based classes online. I have some lecture classes like Core Bio and Psych, which I prefer online because you can go back to check what the professor said if you miss something.

But the discussion classes are weird. Everyone is on mute and you can’t tell who you should be looking at. The Soc professor is usually really funny, but the jokes can’t deliver the same way when you’re not in person.

I feel you. How’s campus?

The weather is gorgeous and the campus is getting prettier and prettier. It’s upsetting to see the campus so nice and not be able to enjoy that with your friends. There’s no one here to share the beauty with.

When you first found out about coronavirus, did you think it’d be as big a threat as it has become?

I did. The virus hit Asia first. I heard about cases from my friends in Singapore. I have friends who are studying in Korea, and they told me about how bad it was.

Did you feel like the people close to you took appropriate action?

Not until we found out school was going online. We were all still joking about it in Cathey [Dining Commons]. When someone would sneeze, it’d be a joke to yell “Coronavirus!” But now no one would make that joke.

How do you feel about how the United States has responded?

I feel like the US response was bad compared to other countries. In Singapore and Hong Kong and Korea, places where I have friends, people are more willing to listen to the government. In America people prioritize individual rights and freedoms over the better good.

For example, my friend in South Korea had his phone actively monitored, which was actually good, because his friend contracted the virus. His location helped identify the people who may have been exposed, so they called those people in to get tested.

What have you been doing to cope?

I call my family pretty often. They’re worried about me being here. That takes up a chunk of my day because of the time difference. I play guitar as well as bike around.

Are you worried at all? We are around each other pretty often and have to go to the same places every day.

I think the measures UChicago has put in place, like closing the common spaces and kitchens, were really good. Now the only person I talk to on a regular basis is Emily.

I’m not too scared, especially because of our age. My roommate had it, as well as her twin sister and father, and they all recovered. I’m not too worried in terms of my health, but I don’t want to be a carrier and help it travel to other people who may not be as lucky.