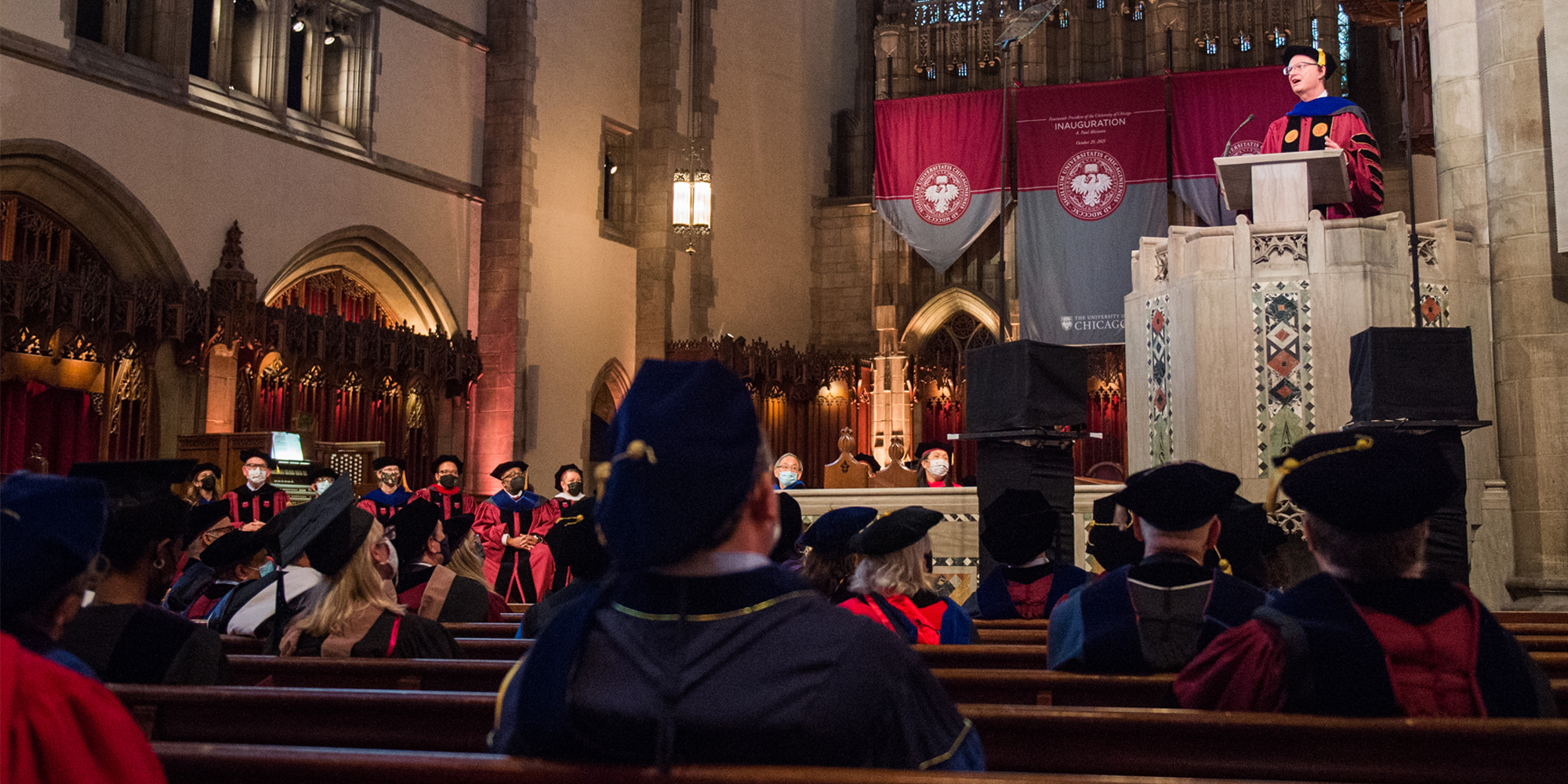 Rockefeller Memorial Chapel during the 535th Convocation on October 29, 2021. (Photography by Jean Lachat)

Scenes and voices from the inauguration of President Paul Alivisatos, AB’81.

Yes, a celebration in a half full Rockefeller Memorial Chapel amid a pandemic can feel joyful. That was undeniably the case on October 29, when Paul Alivisatos, AB’81, was inaugurated as the University of Chicago’s 14th president.

It helped, especially on a drizzly morning, to have faculty in a kaleidoscope of academic regalia gathered outside the chapel as bagpipers played at full squall. Inside Rockefeller, a socially distanced assembly stood facing the main doors, eager for the arrival of the presidential party.

As the 10 a.m. hour approached, trumpets blared, the organ (percolating all morning) swelled, and the procession flowed into the chapel, down the center aisle, and up to the transept, where University marshal Victoria E. Prince, professor of organismal biology and anatomy, awaited to “declare open the 535th Convocation of the University of Chicago.”

It was also Prince’s duty to introduce the day’s speakers, beginning with the representatives of the faculty, students, staff, alumni, and South Side community who had been invited to welcome Alivisatos back to UChicago and into his new role.

Eve L. Ewing, AB’08, assistant professor in the Crown Family School of Social Work, Policy, and Practice, spoke for the faculty. She urged Alivisatos to view UChicago’s intellectual rigor from a different angle. “When we use our aptitude for critical questioning to face inward and demand better of ourselves and one another,” Ewing said, “the University of Chicago—not the abstract institution, but the people who comprise it—we are capable of tremendous collective good.”

Integrative biology graduate student Vishruth Venkataraman likened the University to a symphony “composed of thousands of voices—some harmonious, some dissonant,” with Alivisatos as their listener. He quoted Tamil poet Thiruvalluvar, who wrote that the greatest wealth is that obtained by listening. “And for your wisdom, insight, and the wealth of listening that you bring, President Alivisatos, we bid you welcome.”

Speaking for staff, Jennifer Kennedy, AB’02, director of Student Centers, recalled her time in the College and the employees who helped her see “that there was a place for me at the University of Chicago.” Today’s staff, she told Alivisatos, is “poised to work with you to realize the full potential of this University.”

Alumni Board president Margaret M. Mueller, AM’97, echoed the sentiment on behalf of UChicago’s almost 200,000 alumni: “I call on you to consider the role alumni play in moving us forward. And we will be ready for your call.”

Community representative Rev. Julian DeShazier, MDiv’10, senior pastor of the University Church of Chicago, said, “A relationship only buds when those involved view each other as equals, which means not only will the University change and make life better for Woodlawn and South Shore … but the University must be willing to be transformed by the South Side.”

After the welcomes, two of the new president’s past mentors spoke: University of California, Berkeley, chancellor Carol T. Christ, who appointed Alivisatos as the school’s provost in 2017, and Steven Chu, former US Secretary of Energy, Nobel laureate in physics, and Alivisatos’s onetime boss at the Lawrence Berkeley National Laboratory.

The ceremony culminated with the formal induction of Alivisatos as president, performed by chair of the Board of Trustees Joseph Neubauer, MBA’65, and the inaugural address. The address revealed that not only had Alivisatos been listening; he had heard.

The University’s distinctive culture and set of core values, Alivisatos said, constitute its capital and unify “some of the world’s best thinkers, scholars, researchers, educators, analysts, advocates, artists, entrepreneurs, and creators.” He called on all listening to engage that capital and “connect it to the world at large.”

The great challenges and opportunities of the moment make it imperative, he said, to now embark on this “journey of reconnection” with the community, the city, and the wider world. Only by doing so can the University community “reach higher levels of achievement than ever before, and we will bring entirely new benefits to humanity.” (Read President Alivisatos’s
entire address.
)

Outside Rockefeller following the ceremony, the crowd dispersed in the rain—to cars, lunch, offices, and class. Alivisatos, however, remained behind, beaming as he accepted handshakes, fist bumps, even a hug.