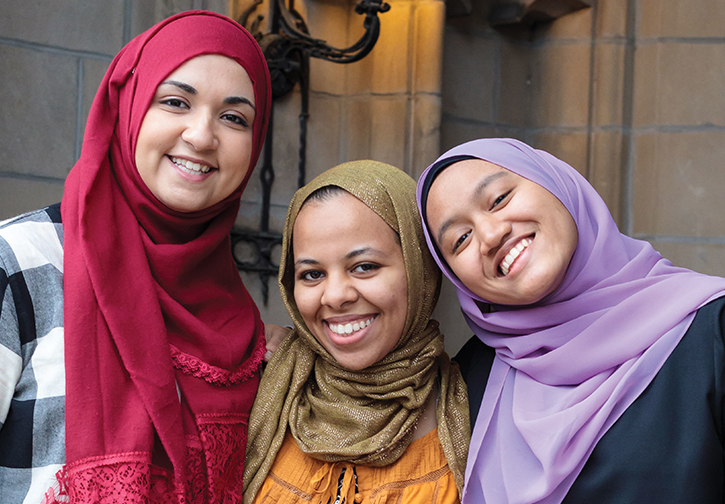 Questions for the Muslim Students Association

On praying in the stacks, when Ramadan and finals week coincide, and Muslim fashion.

There are about 60 active members of the Muslim Students Association, mostly undergrads. President Ala Tineh, AB’17; community chair Leyla Abdella, Class of 2019; and Nadine Faisal, Class of 2019, told the Core about MSA’s events and Muslim life on campus. Interview has been edited and adapted.

Are there any non-Muslims in MSA?

Ala: Anyone is welcome. But the core things we do are geared toward people who are Muslim.

Leyla: We’re a spiritual organization, but that’s not limited to prayer. Our regular weekly event is halaqa, a spiritual discussion.

Ala: We hold over 30 events a quarter. We’re working with the Hindu students to host a concert/art exhibition on Muslim and Hindu history. Tonight we have a panel event on Abraham and what he means in different faiths. Tomorrow we’re having our annual bake-off for different faith groups. It turns out the Catholic Students Association is really good at baking.

Do the Catholics always win?

Ala: They’ve won for the last two years. I think it’s the cream cheese.

What are the biggest misconceptions about Muslims or Islam?

Leyla: Probably that we’re all the same, or we belong to some sort of monolith. We’re just like anyone else—individual.

Do other students ask you questions?

Leyla: My closer friends do. A lot of the questions are about hijab, probably because that’s the most visible aspect of my practicing Islam.

Is it difficult to fit five prayers a day into your academic schedule?

Ala: In the winter it’s harder because the times for prayers are closer together. And it can be hard to find spaces. A lot of people pray in the library, if they’re studying. I pray in the book stacks sometimes. One time someone just stopped. I thought, maybe they need to get a book? I had picked the most obscure section—ancient Czech history. They left eventually.

Nadine: Coming from Malaysia, even in malls there’s a prayer room. The idea of just praying in the stacks ... I do it because I have to.

Leyla: As a freshman, I was a little bit uncomfortable with praying in public, but I’ve gotten over that. I even pray outside on the quad sometimes, weather permitting.

How about Halal food?

Ala: Getting a Halal station in the dining halls was a really big deal. Last year was the first year we had meals for Ramadan. You start fasting at dawn. Before dawn, you wake up and eat a small meal. People on the dining plan could pick up a little Halal meal the night before. I think it was during finals week that Ramadan started.

Ala: I actually liked it. It was a good reason not to leave your room and waste an hour eating.

Leyla: I associate Ramadan with good childhood memories. It made finals week more bearable. There’s solidarity in fasting, knowing that you’re doing it with millions of Muslims around the world. Also, midnight baking, midnight ice cream, midnight everything!

Overall, do you feel comfortable on campus?

Ala: There are definitely microaggressions. Not just against Islam, but being a spiritual person in a very academic space, that’s sort of looked down upon.

Nadine: I’ve been surprised, given my image of America, by how religious people actually are.

Leyla: As an identifiable Muslim, any actions that I do have the potential to be interpreted as a representation of how Muslims behave. For my own well-being, I don’t actively think about that.

Leyla: I’m involved in activism on campus, primarily Students for Justice in Palestine. I also like to cook and watch TV—sometimes reality TV.

Nadine: I like to read sewing blogs. I actually designed for MODA last quarter. I created three looks and sewed them all. I’m wearing part of it now.

Ala: I like to keep up with high fashion, like fashion shows. Avant-garde pieces. I’m trying to pick up running, but I’m not made for it. I started doing barre.