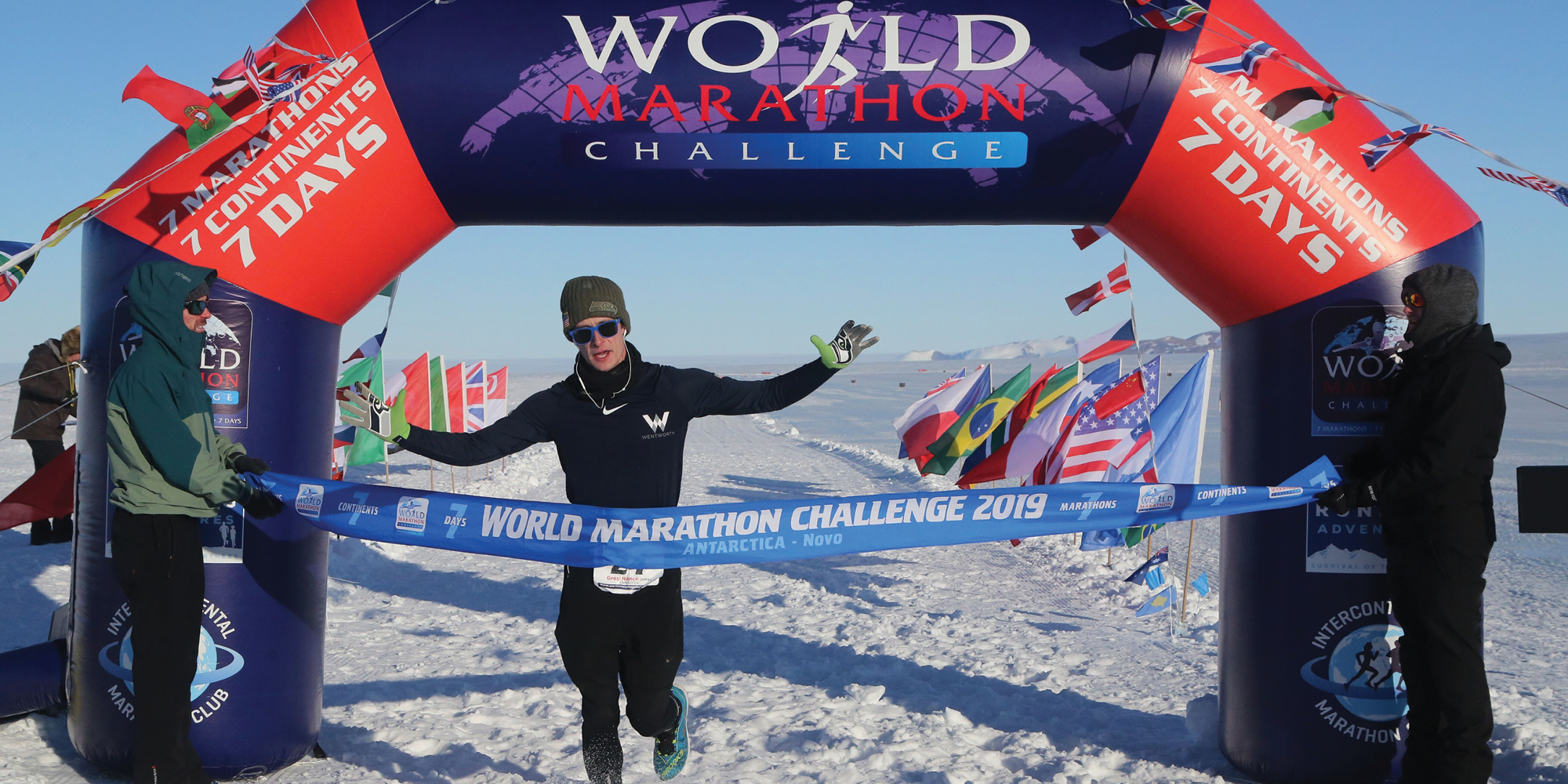 On January 31, Greg Nance, AB’11, crossed the finish line of a marathon held near Novolazarevskaya Station in Antarctica. It was the first of seven marathons on seven continents in seven days he completed as part of the 2019 World Marathon Challenge. (Photo courtesy Greg Nance, AB’11)

It’s 7 a.m. in Shanghai and Greg Nance, AB’11, has run 12 miles. “I’m just getting back into training,” he says. He’s Skyping from his office, which appears to be a sort of concrete bunker. He wears a blue hoodie with the orange logo of Moneythink, the organization he cofounded while he was a student at the University of Chicago. He doesn’t look tired.

“I get up early, before the day’s distractions have begun,” Nance says. He usually sets off for his morning run around 4 a.m., clocking anywhere between 15 and 25 miles. “That three hours in the morning is the perfect time. If you can spend even 90 minutes without your phone glued to your hand, you’re capable of much deeper concentration and thinking than you realize.”

To the untrained eye, Nance might appear to be fully optimized. Moneythink, where Nance is chairman, provides financial aid and college admissions guidance to low-income high schoolers. In 2012 Nance founded Dyad, a digital mentorship platform for students applying to college and graduate school. And in February he completed the World Marathon Challenge, in which participants run seven marathons on seven continents in seven days.

The first marathon was in Antarctica, and it was a high point for Nance. “Landing in this Boeing 757 on an ice field in Antarctica was really a lot of boyhood dreams coming true. I grew up reading about [Ernest] Shackleton and Robert Falcon Scott, Roald Amundsen”—fellow aficionados of extreme suffering—“so that was just amazing.” Nance set out from the starting line running hard, and ultimately earned seventh place in the race. It was a moment of uncomplicated triumph.

But that finish stands in harsh relief to the days that followed. Hours later, on the flight from Antarctica to Cape Town, South Africa, when participants were getting some much-needed sleep, Nance woke in a cold sweat. A wave of nausea hit, heralding the arrival of a stomach flu. It was 100 degrees in Cape Town when he stepped off the plane. Barely able to keep down water, Nance began his second marathon of the week. His electrolytes were completely depleted from dehydration, and by mile 10 his legs started to cramp. “Within a few miles, it was like a heartbeat in my quadriceps in every step—convulsing. It was torturous.” He adjusted his stride, trying to find a way to run that protected his mid-mortis quads. He ran the last 16 miles in a twisting waddle, like a lizard on its back legs.

Over the next five days, his social media dispatches became increasingly dire. “Famished and dehydrated with burning quads and blistered feet slowed me to a hobble but I lumbered to the finish!” he wrote from Santiago, Chile. He’d gotten through that race listening to Ron Chernow’s biography of Ulysses S. Grant on audiobook at 2.5x speed—just shy of auctioneer pace. (“Grant has to overcome a lot of physical anguish and mental pains as he’s trying to win the Civil War,” Nance says of his book choice.) A day later, though, Nance made it to the finish line in Miami. His sponsor for the race, Wentworth Management Services, was there to dump a bottle of champagne on him, and his parents were there with Pedialyte.

The most awe-inspiring thing about Nance’s ordeal in the World Marathon Challenge—besides the absurdity of attempting it at all—is that he doesn’t see it as an ordeal, but as a privilege. “I realize that all the limits that I thought I had in my life are completely arbitrary,” he says. “They’re self-imposed.”

Now Nance must up the ante once more. In August he plans to run 206 miles around Mount St. Helens in the Bigfoot 200. After that he’s set his sights on running coast-to-coast across the United States, à la Forrest Gump. He’s currently training to run from one Shanghai airport to the other. “I’m trying to become the fastest guy to ever run across the city. That’s basically to keep myself in shape, because I need a goal to work towards or else I get lazy.” Sure.