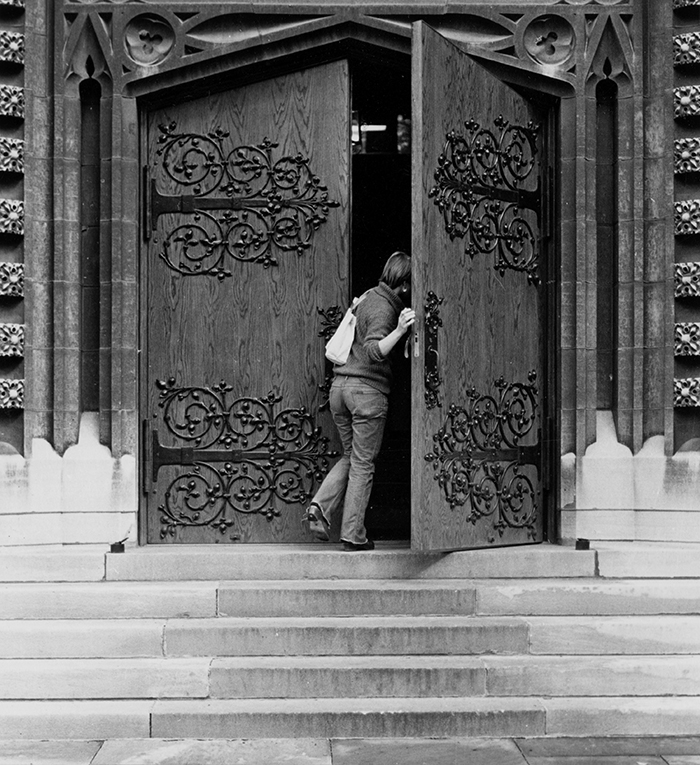 In 1892 Chicago meatpacking magnate and philanthropist Sidney A. Kent told the University trustees that he had decided to “erect and furnish” a chemistry building on campus. He meant what he said, overseeing every detail—and paying the bills as they arrived. Kent Chemical Laboratory (shown here in an undated photo) opened in 1894. (Copyright 2022, The Chicago Maroon. All rights reserved. Reprinted with permission.) 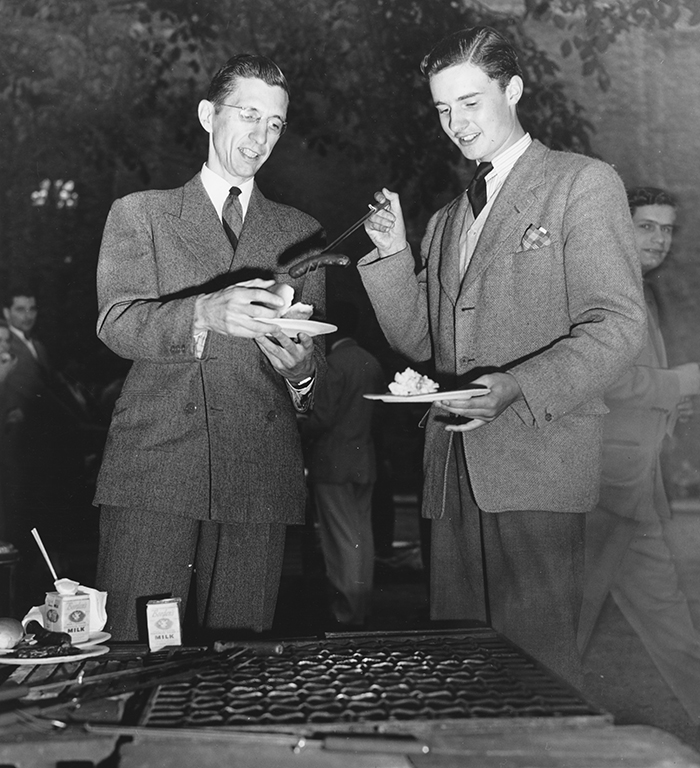 At the 1951 Orientation Week picnic, Anthony St. Clere Berkeley Gage, EX’53, serves a hot dog to F. Champion Ward, dean of the College. Archives do not reveal whether Ward ate a Chicago-style dog (Vienna beef topped with yellow mustard, sweet relish, onions, tomatoes, pickle spear, sport peppers, and celery salt on a poppy seed bun), an MLA-style dog (the existence of which was posited on Twitter this past summer—toppings unknown), or one made in a competing academic style. What toppings would belong on an MLA dog? And what might MLA pizza be like? Share your deep-dish thoughts with uchicago-magazine@uchicago.edu. (Photography by Stephen Lewellyn, AB’48; UChicago Photographic Archive, apf4-02351, Hanna Holborn Gray Special Collections Research Center, University of Chicago Library) 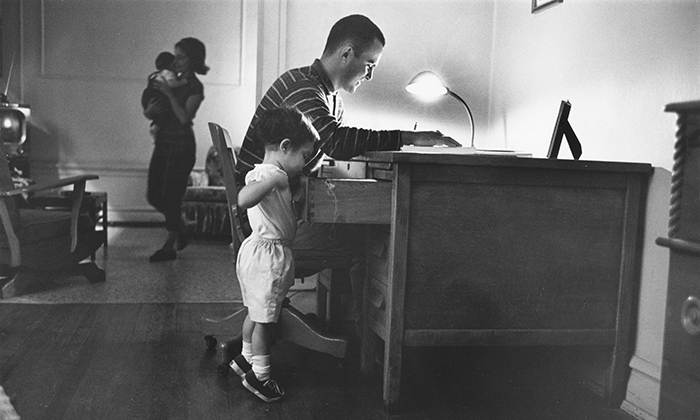 In 1961 Eugene F. Fama, MBA’63, PhD’64, then a graduate student, tries to focus on something other than family. Daughter Marybeth, LAB’77, AB’83, peers helpfully into a drawer; in the background, wife Sallyann snuggles their son Eugene Fama Jr., LAB’79, AB’84. The couple would later have two more children: Christopher Fama, LAB’81, MBA’91, and Elizabeth Fama, AB’85, MBA’91, PhD’96. When her father won the 2013 Nobel Memorial Prize in Economics, Elizabeth Fama recalls on her website, “three generations of Famas exploded with pride (publicly, in Stockholm).” Did you live with family members—parents, children, siblings, or others—while you were at UChicago? (And did they win any prizes?) Send your family story to uchicago-magazine@uchicago.edu. (Photography by Albert C. Flores, EX’62; UChicago Photographic Archive, apf4-02890, Hanna Holborn Gray Special Collections Research Center, University of Chicago Library)

“Perambulate the oblong spheroid up the turf!” 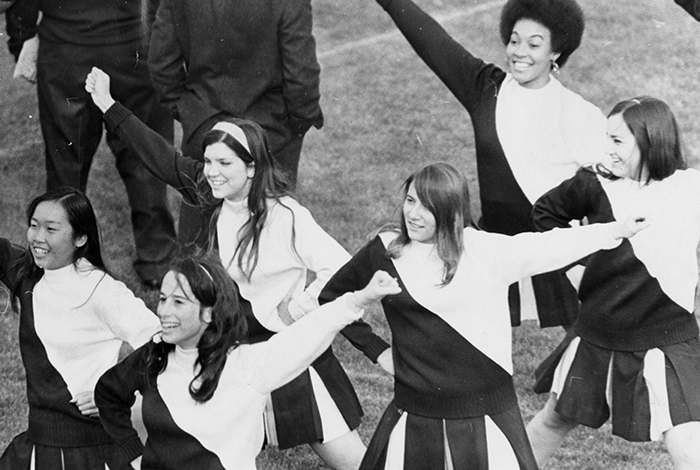 UChicago cheerleaders strike a power pose in 1969, the same year varsity football returned to the University. The student body responded with cheers: “Themistocles, Thucydides, the Peloponnesian War / X squared, Y squared, H2SO4. / Who for? What for? Who we gonna yell for? / Go, Maroons!” Since Big Bertha, the enormous drum of the Big Ten years, was long gone, Big Ed (named in honor of UChicago president Edward Levi, LAB’28, PhB’32, JD’35), the world’s largest kazoo, had to be subbed in. Where fun comes to die, indeed. Were you an athletic supporter? Send your stories from the stands to uchicago-magazine@uchicago.edu. (UChicago Photographic Archive, apf7-01688, Hanna Holborn Gray Special Collections Research Center, University of Chicago Library) 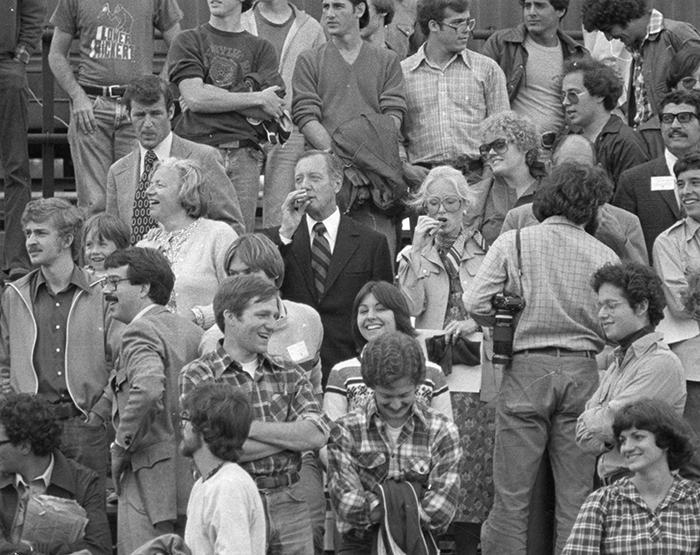 When Hanna Holborn Gray (center left) became the ﬁrst woman president of UChicago in 1978, the kazoo tradition was still going strong. During her ﬁrst Autumn Quarter at UChicago, she invited Chicago mayor Michael Bilandic and his wife, Heather Morgan, to Stagg Field, where they gamely joined in the kazoo playing at halftime. Four months later, Bilandic was blamed for the city’s slow response to the infamous blizzard of 1979, paving the way for Chicago’s ﬁrst woman mayor, Jane Byrne. Did you meet any famous politicians while you were at UChicago? Send your tales of political intrigue to uchicago-magazine@uchicago.edu. (Photography by Mary Bartholomew, UChicago Photographic Archive, apf1-00683, Hanna Holborn Gray Special Collections Research Center, University of Chicago Library) 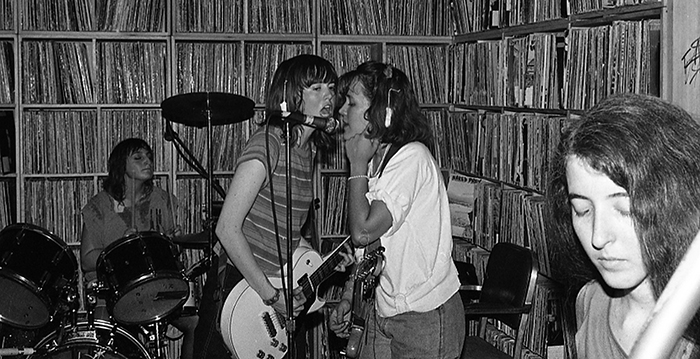 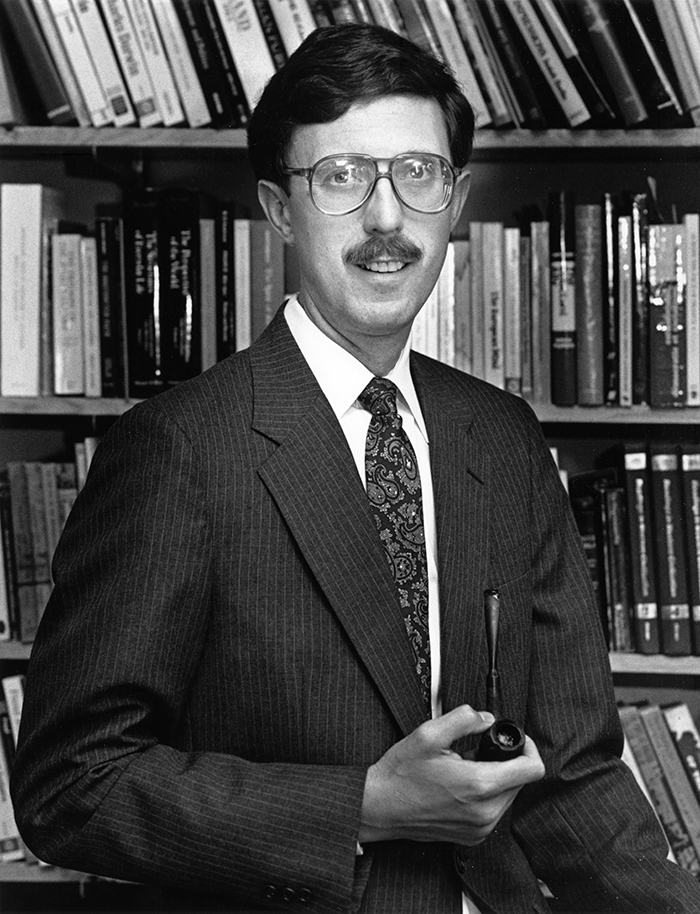 When John W. Boyer, AM’69, PhD’75 (shown here in 1987), the Martin A. Ryerson Distinguished Service Professor in the Department of History, was appointed dean of the College in 1992, could he have had any notion that he would become its longest-serving dean? Over three decades, Boyer has transformed the College: updating the Core curriculum, more than doubling enrollment, establishing the Odyssey Scholarship Program, developing UChicago’s unique Civilization Abroad programs, and more. At the end of this academic year, Boyer will become senior adviser to the president, with responsibilities involving global education and public discourse. He will also continue to teach in the College, including his popular study abroad course in Vienna. The College is collecting alumni memories of Boyer. Please send your memories to uchicago-magazine@uchicago.edu. (Photography by Keith Swinden, UChicago Photographic Archive, apf1-11920, Hanna Holborn Gray Special Collections Research Center, University of Chicago Library) 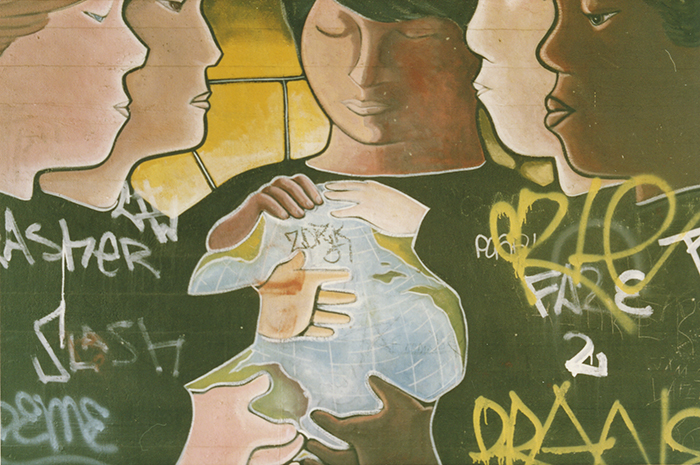 Layers of text interventions have been added to the bodies—but not the faces—depicted in this undated photo of the 1977 artwork Children of Goodwill (also known as Childhood Is Without Prejudice) by William Walker. The mural, on the south side of the 56th Street Metra underpass, was restored in 1993 by Olivia Gude, MFA’82, and Bernard Williams; restored again in 2009 by Nicholas Kashian and Gude; and yet again in 2018 by Damon Lamar Reed and Williams. What is your favorite (or least favorite) public art in Hyde Park? Send your critical thoughts to uchicago-magazine@uchicago.edu. (Photography by Andre Robotewskyj, AB’93; UChicago Photographic Archive, apf7-04781-009, Hanna Holborn Gray Special Collections Research Center, University of Chicago Library) 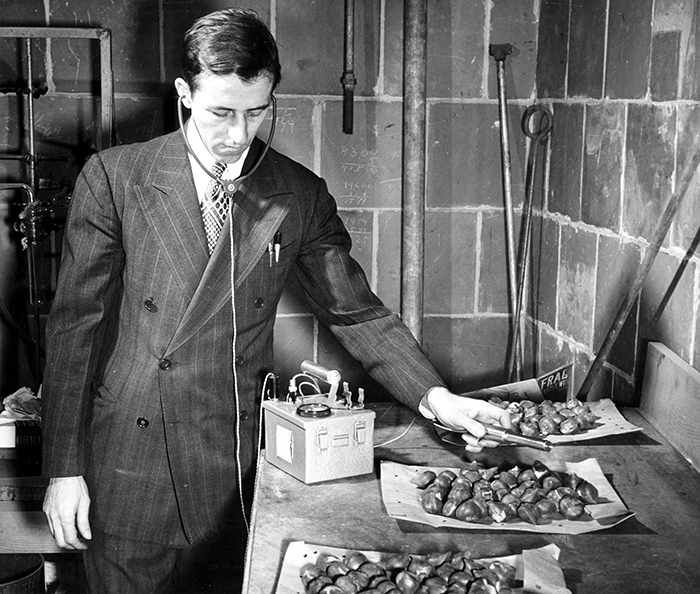 In this 1949 photo, Norbert J. Scully, SM’40, PhD’42, uses a Geiger-Müller counter to check tulip bulbs for radioactivity before they are planted. Scully, a plant physiologist and then chief of Argonne Laboratory’s Radiology Experiment Station, was a specialist in plant responses to radiation. Did you work in a lab when you were at UChicago? Send your science stories to uchicago-magazine@uchicago.edu. (UChicago Photographic Archive, apf2-00475, Hanna Holborn Gray Special Collections Research Center, University of Chicago Library)