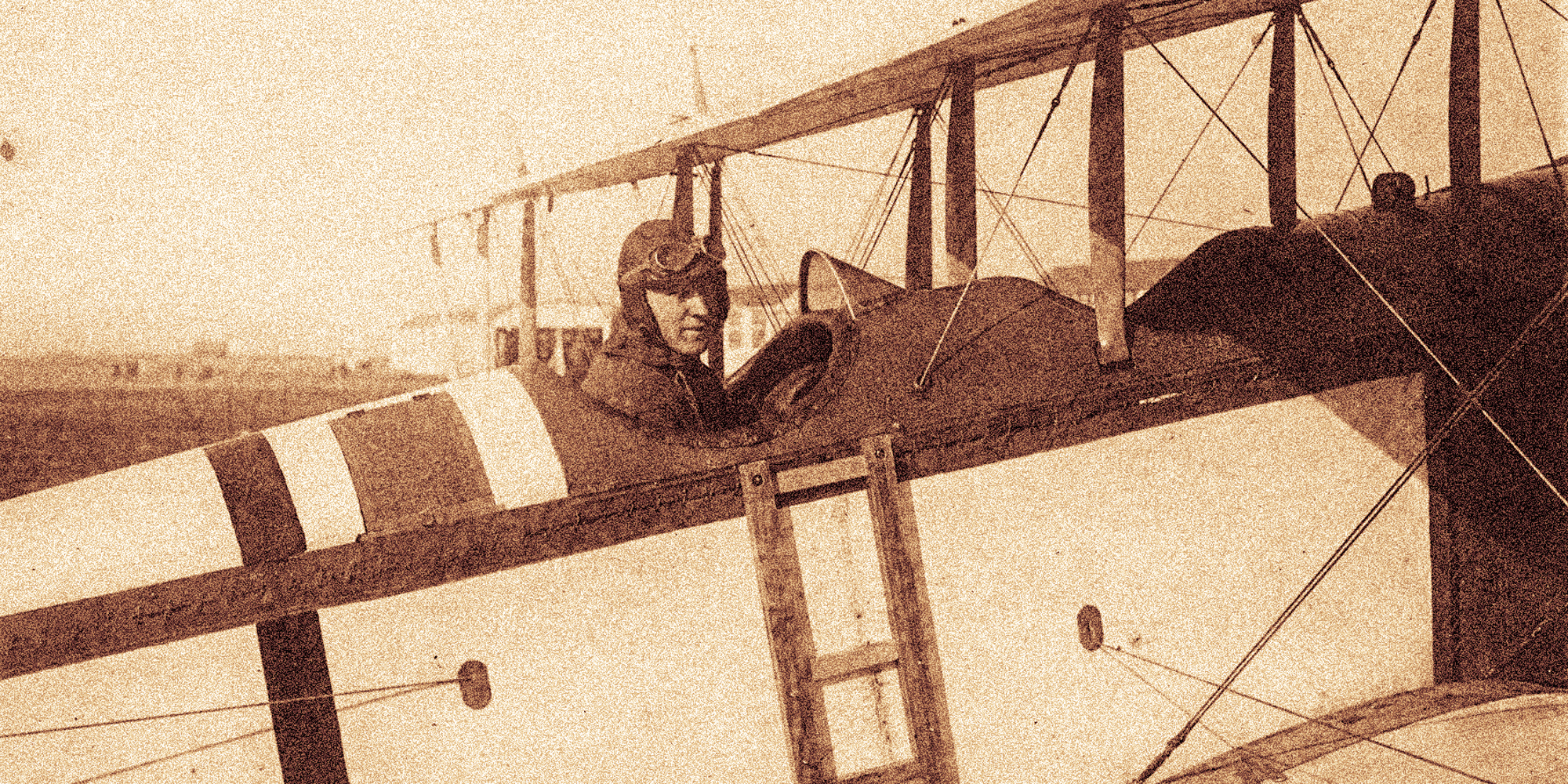 When he joined the 50th Aero Squadron during World War I, Harold Goettler, AS 1914, SB 1914, was assigned to fly the De Havilland 4. Because of its explosion-prone gas tank, the plane earned the grisly nickname “the flaming coffin.” (Photo courtesy National Museum of the United States Air Force)

By
Author
David Chrisinger, AM’10
|
The University of Chicago Magazine
—
Fall/19

No one would have blamed him if he had decided not to fly again that day. During his first attempt to locate and resupply the men of the “Lost Battalion,” on October 6, 1918, Harold Goettler and his single-engine biplane had been nearly ripped to shreds by German machine gunners dug into the cliffs of a ravine deep in France’s Argonne Forest. But 1st Lt. Goettler, AS 1914, SB 1914, and his observer-gunner, 2nd Lt. Erwin R. Bleckley, believed they had seen through the fog signs of what was left of the nearly 700 men under Maj. Charles W. Whittlesey’s command. So Goettler decided, with permission from his commanding officer, to borrow another crew’s plane and try again.

The plan was simple: fly their De Havilland 4, or DH-4, low and slow over the Charlevaux Ravine to tempt the Germans into firing, thus revealing their dug-in positions. The two fliers believed that if they could mark the enemy’s positions this way, they’d be able to deduce, by process of elimination, precisely where Whittlesey and his men were. As Goettler and Bleckley readied for takeoff, their commanding officer warned them to be careful. Shouting over the revving engine, Bleckley replied, “Don’t worry, lieutenant. We’ll find ’em, or we won’t come back!”

On November 25, 1922, four years after Goettler and Bleckley’s fateful flight, the War Department’s Adjutant General’s Office notified Goettler’s mother, Gertrude, that her son would be posthumously awarded the Medal of Honor. The medal, the highest for valor in combat that an American military service member can receive, should have immortalized Goettler as a hero of one of the most famous battles in American military history. Instead, his story of service and sacrifice has largely been lost to history, buried beneath the suffocating layers of rumor, myth, and legend that emerged soon after the surviving members of the Lost Battalion marched out of the Charlevaux Ravine.

In the fall of 1910, Harold Ernest Goettler arrived at the University of Chicago planning to study German. He pledged Delta Kappa Epsilon and played right tackle for the 1913 championship football team. A picture taken of him in his uniform shows a tall, thick-legged young man with his hands at his sides, serious and unsmiling.

Soon after graduating, Goettler landed a job with the Chicago real estate management company McKey & Poague. Later that year, he sent a short note to the newsletter of the Owl and Serpent, a senior society at the University, informing fellow members that he was still single and hadn’t yet made his fortune. He added, “If any of the brothers are thinking of getting married, tell them to come and see me about renting a nice little flat.”

When America declared war on Germany in 1917, Goettler signed up to serve in the Signal Enlisted Reserve Corps, the aerial warfare service of the United States. By April 1918, he had been commissioned as a 2nd lieutenant and ordered to report to the 50th Aero Squadron in France, where he would fly missions over enemy territory to spot their artillery batteries.

Goettler’s first mission took place on September 12—the start of the St. Mihiel Offensive. The goal of this US-led campaign was to break through the stalemate between French and German forces and threaten German war production and the rail network around the Briey Iron Basin. American military leaders also believed the offensive, if victorious, would show the Allies that the Americans were equal partners in the fight against Germany. “The big push opened last night at 1:00 a.m.,” Goettler wrote in his diary, “and it was some noise. The clouds were low but from our positions we saw the barrage very clearly.” After sleeping for a few hours, Goettler woke and prepared to take off with Bleckley just after daybreak. As part of an enormous armada of 1,481 Allied planes, Goettler and Bleckley were ordered to observe the movements of frontline troops and artillery pieces to gauge the effect the offensive was having on the German army. But thick cloud cover obscured their view, and the two fliers returned to the airdrome at 7:15 a.m.

The next week was quiet for Goettler and Bleckley. In his diary, Goettler wrote that he was glad, because his “ship was in no shape to fly.” He passed the time reading through letters from home, playing some baseball and a little poker, and lunching at the Hotel Metz. Nearly a week later, on September 26, Goettler and Bleckley went up to surveil German artillery positions. “No Bosh [sic] bothered us,” Goettler wrote of the Germans, “and our trip was uneventful.” That was the last day he wrote anything in his diary.

On October 2, Whittlesey, a lanky New Englander who had trained as a lawyer before the war, was ordered to attack a heavily fortified and nearly impregnable ravine in the dense Argonne Forest with nine companies of men as part of the Meuse-Argonne offensive. It was the largest operation American soldiers would engage in during the First World War—and the deadliest campaign in American history. Before it ended with the signing of the Armistice on November 11, 1918, the offensive would claim the lives of more than 26,000 Americans, with another 120,000 wounded. Whittlesey was to hold his position regardless of the losses once he reached his objective.

Plunging headlong into the growth and underbrush with his men, Whittlesey succeeded in reaching the ravine. But by the next day, the Germans had surrounded the Americans, cutting them off from reinforcements. For the next 100 hours, as Whittlesey’s men were slashed to ribbons by ghostlike German machine gunners, artillerymen, and snipers, the survivors quickly ran out of supplies. Instead of food and cigarettes, the men munched on twigs and smoked dried leaves wrapped in yellow message paper. Blood-crusted bandages had to be taken from the dead and applied to those freshly injured. “The wounded would crawl across the frozen ground to the dead,” a veteran of the battle later recalled. “They would drag themselves to the corpses, and ransack the pockets and packs for a scrap of food or tobacco. Or search for even a drop of water in the canteens.”

By October 5, the men under Whittlesey’s command were on the verge of collapse. The Germans, in contrast, were well supplied and continued to pour fire into the American lines from the north and south, leaving the hillside littered with dead bodies the survivors were too exhausted to bury. Stationed safely behind the front lines, Goettler wrote to his mother that same day: “Just a note to let you know I am OK and getting along alright.”

The next day, Goettler’s squadron was ordered to fly over the Charlevaux Ravine and try to locate the Lost Battalion, which, in reality, was neither lost nor a battalion (a newspaperman coined the phrase). They were to drop much-needed food and medical supplies. Because combat aircraft during World War I were not equipped with radios, ground forces had to communicate with them using signal panels—white bedsheets that ground troops would lay out in certain configurations to represent encoded messages. Fearing that these panels would be visible to the Germans manning the cliffs above their position, the Americans kept them from view.

Mist and smoke covered the ground in the early morning of October 6, making it nearly impossible from 1,000 feet up to identify anyone in the heavily wooded hillside, let alone to distinguish friend from foe. So Goettler dropped to 500 feet to try to get a better look. Then 300 feet. When Goettler and Bleckley reached 200 feet, the Germans hiding in the cliffs began firing from above. The slow-flying DH-4, nicknamed the “flaming coffin” because its pressurized gas tank had a tendency to explode, was an irresistible target as it lumbered just above the treetops. Before long, the plane was riddled with bullet holes and gashed by shrapnel, and Goettler was forced to return.

Goettler landed at the airdrome, and soon after he and Bleckley headed back up into the air with another crew’s DH-4. As they approached the location Bleckley had pinpointed on his map before taking off, Goettler pushed the control stick forward and plunged into the ravine once more. They quickly passed above the area Bleckley suspected would light up with heavy enemy fire, dropping almost to the ground in an open stretch of land, rising to clear the trees, before pivoting on one wing to come back around.

To the Germans hidden among the vegetation on the floor of the ravine, a second opportunity to take down an enemy aircraft was not to be missed. Opening up with rifles and machine guns, the Germans did just what the fliers had intended: they gave away their positions.

With each burst of fire, Bleckley marked its origin on his map. But soon hundreds of bullets were chewing through the wing’s wood struts, leaving static wires hanging loose like broken guitar strings. From the ground, an American Field Service ambulance driver watched the daring fliers. He recalled after the war how erratic the biplane’s flight path became before it turned back out of the ravine.

Goettler was dead. A German bullet had blown away most of his skull. Without a lead pilot to control the biplane, Bleckley must have grabbed the rear cockpit control stick, pulling it up and over to turn the DH-4 away from the ravine toward Allied lines. Following this turn, Goettler’s lifeless body likely slumped forward in the front cockpit, pushing the control stick forward as well. With its control cables shot away, the battered craft heeled over and nosedived into the ground. The impact threw Bleckley from the biplane, causing devastating internal injuries. He took his last breath on the way to a field hospital at Villers-Daucourt.

The day after Goettler and Bleckley were killed, the German troops who had pinned down Whittlesey and his men in the Charlevaux Ravine abruptly withdrew under intense fire from advancing American troops. Of the 694 officers and enlisted men who began the offensive, only 194 sunken-cheeked survivors were strong enough to stagger out of the Argonne Forest.

Goettler’s commanding officer, Lt. D. B. Morse Jr., wrote a heartfelt letter to the young officer’s grieving mother. He did not mention the fact that her son’s mission had been unsuccessful in the sense that the men of the Lost Battalion never received the supplies they badly needed. Morse clearly believed that was beside the point. Goettler and Bleckley didn’t have to go out on that second flight. They had done their duty the first time around. But that wasn’t enough for them. Instead, they took off a second time likely knowing they weren’t going to make it back. Their mission, Morse wrote, was “a most perilous one,” and Goettler had taken it on “with the wonderful spirit he has always shown while in the squadron.” Describing her son’s death as “most heroic,” Morse assured Goettler’s mother that her son would be recommended for a medal for his selflessness and valor. “Your son’s death,” he concluded, “has not been in vain.”

David Chrisinger, AM’10, is the director of the Harris Public Policy Writing Program at the University of Chicago and a contributing writer to the New York Times’s At War column. He is currently writing a book about famed war correspondent Ernie Pyle, due out in 2021.