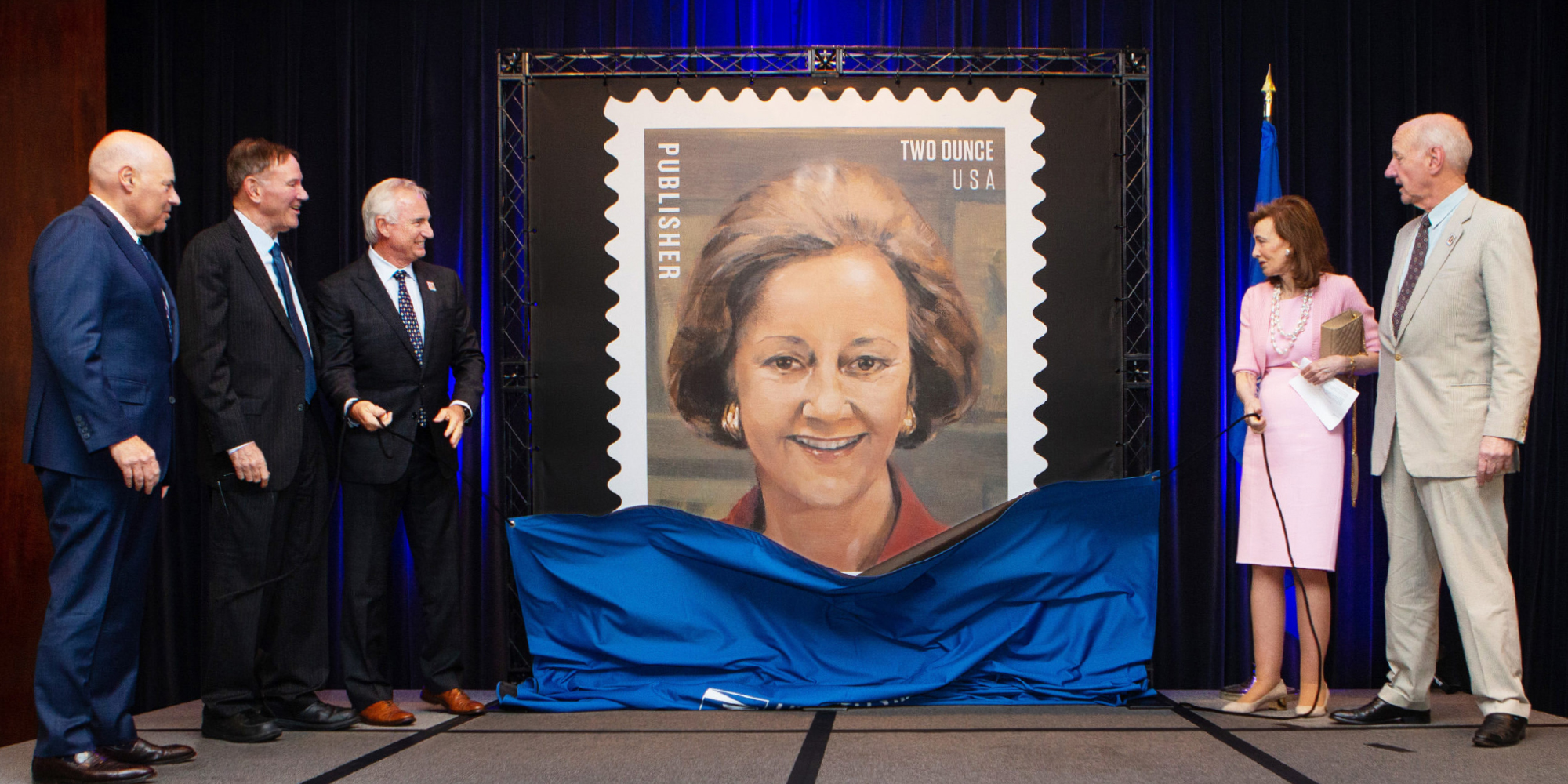 The USPS stamp honoring Katharine Graham, AB’38, was unveiled in the James Madison Building of the Library of Congress on June 14, 2022. (All images courtesy the US Postal Service)

By
Author
Laura Demanski, AM’94
|
The University of Chicago Magazine
—
Summer/22

What costs 84 cents, can go coast to coast (plus to Alaska and Hawaii), and celebrates a great American publisher?

Graham led the newspaper, published by her family’s company, for nearly three decades, taking the helm after the death of her husband, Phil Graham, in 1963. During her tenure, she met challenges, seized opportunities, and transformed the paper—and, at times, the US political landscape.

Risking legal jeopardy, Graham published the Pentagon Papers. She presided over the Post’s historic investigative reporting on the Watergate scandal and navigated complex labor disputes. By the time she stepped down as chair of the board in 1993, the paper had become, under her watch, “a journalism powerhouse that rivaled the New York Times in national reputation,” this publication wrote in 2016 (see “Storied Publisher”)—a stampworthy achievement indeed.

Read on to learn about some of the other UChicagoans with postage icon status and how they rose to top-right-corner heights. 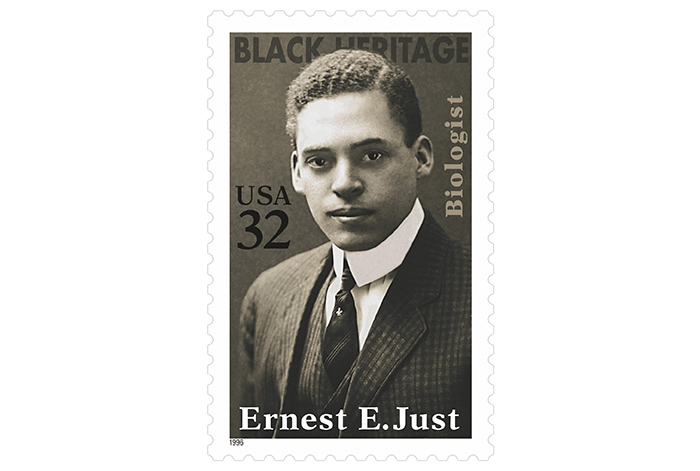 Issued in 1996, the stamp honoring Just is part of the USPS’s Black Heritage series. Just earned his UChicago doctorate while on a leave of absence as head of zoology at Howard University. He spent many summers with UChicago professor Frank Lillie, PhD 1894, at the Marine Biological Laboratory in Woods Hole, Massachusetts, and his research on marine animals led to key insights about the physiology of cell development. Just was the first recipient of the NAACP’s Springarn Medal and is the namesake of the Biological Sciences Division’s annual E. E. Just Lecture. 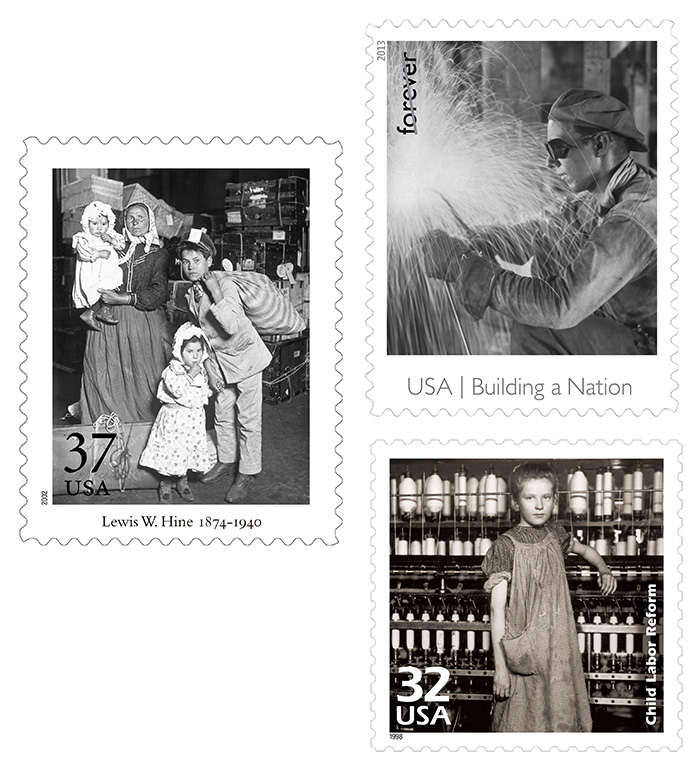 Sociologist Hine is best known for his photographs of children working in factories and living in want. Those photos helped make the public aware of (and subsequently horrified by) child labor, an early step toward legal reform (see “Bodies of Work”). Hine’s images of industrial workmen and of immigrants are also celebrated. A dedicated chronicler of poverty in the United States, Hine was himself destitute at the end of his life. His reputation grew again after he died, and his images are featured in three USPS stamp series: Masters of American Photography (2002), with the work of 19 other artists; Made in America: Building a Nation (2013), in which Hine’s images appeared on 11 of 12 stamps; and Celebrate the Century: 1910s (1998), with an image representing child labor reform. 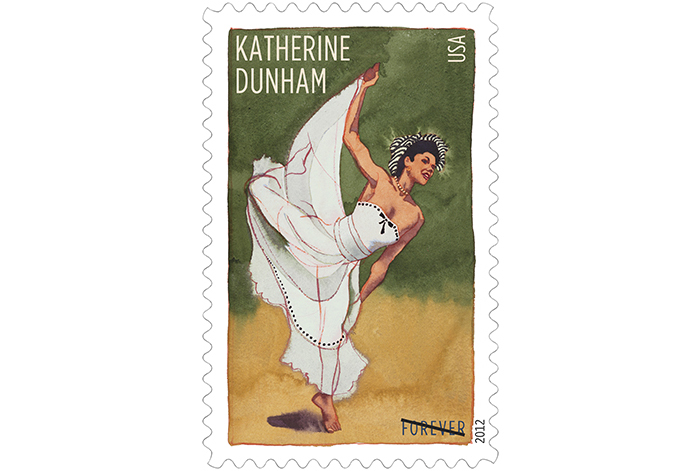 On National Dance Day in 2012, the USPS released the Innovative Choreographers stamp series honoring Dunham alongside fellow dance legends Isadora Duncan, José Limón, and Bob Fosse. Dunham’s career in dance was deeply informed by her studies in anthropology at UChicago (see “Grace Notes”). The inventive work that resulted led her to Broadway and Hollywood, notably in Stormy Weather (1943), one of the earliest movies out of the studio system with an all-Black cast. The Dunham Technique continues to be taught almost two decades after her death. 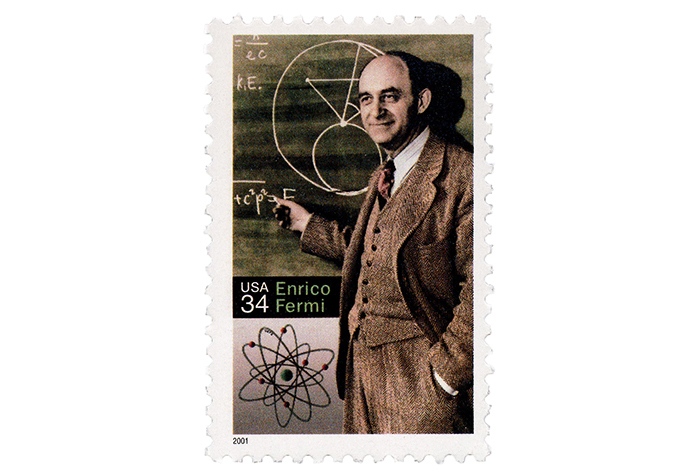 In a photo taken in a UChicago classroom, professor of physics Enrico Fermi stands before a blackboard, chalk in hand, notebook in pocket, a genial expression on his face. The year is 1948 and the Nobelist has moved back from Los Alamos, New Mexico, to Chicago. That photo provided the basis for this illustrated stamp, adorned with a carbon atom in the lower left corner, in honor of the central figure in achieving the first controlled, self-sustaining nuclear chain reaction. The USPS issued the stamp on September 29, 2001, the centennial of Fermi’s birth. 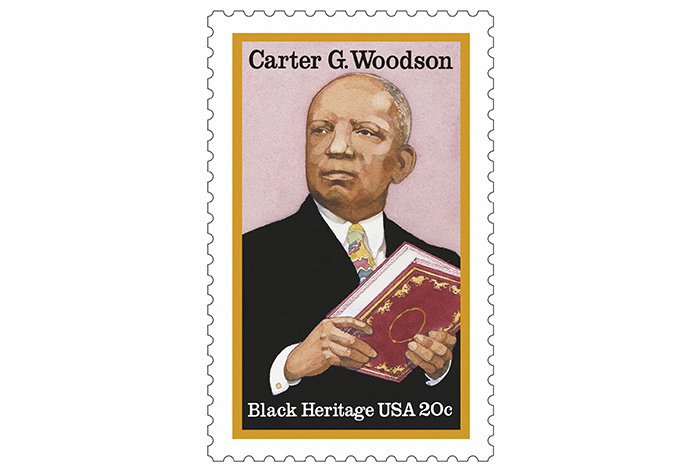 Born to formerly enslaved people, Woodson worked in West Virginia coal mines as a young man before graduating from Berea College in Kentucky and then earning a second bachelor’s and a master’s degree at UChicago. Known as the father of Black history, Woodson insisted on its importance and persuaded Americans of the same. The Black History Month we celebrate today had beginnings in Negro History Week, established in 1926 by Woodson’s Association for the Study of Negro Life and History (now the Association for the Study of African American Life and History). He was recognized in 1984 with a stamp in the Black Heritage series. 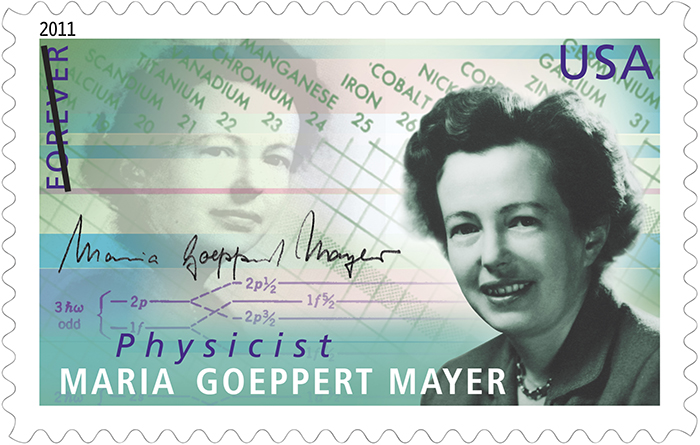 When Goeppert Mayer received a share of the Nobel Prize in Physics in 1963, she became the second woman to earn the honor, the first in 60 years, and one of four ever. Goeppert Mayer worked briefly on the Manhattan Project at Los Alamos before moving to Chicago in 1946. While employed by the University’s Institute for Nuclear Studies and by Argonne National Laboratory, she developed the model of nuclear shell structure that her Nobel recognized. Goeppert Mayer’s stamp was issued in 2011 as part of the American Scientists series. 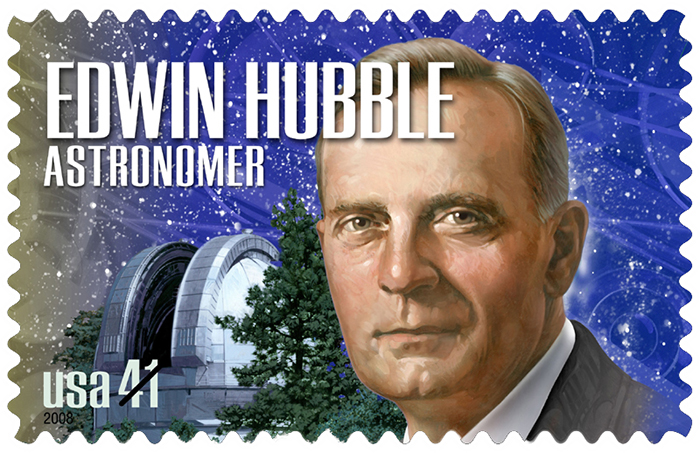 Hubble was a galactic figure in more ways than one. He did no less than introduce cosmology, professor emeritus of astronomy and astrophysics Don York, PhD’71, told the Magazine in 2013 (see mag.uchicago.edu/hubble). Hubble theorized that the universe is expanding (it is) and that there are more galaxies than just ours (there are). His contributions inspired NASA to put his name on the Hubble Space Telescope—which enjoys a five-stamp set of its own. The 41-cent Edwin Hubble stamp in the American Scientists series shows his portrait and his longtime workplace, Mount Wilson Observatory, under a star-speckled Milky Way sky.