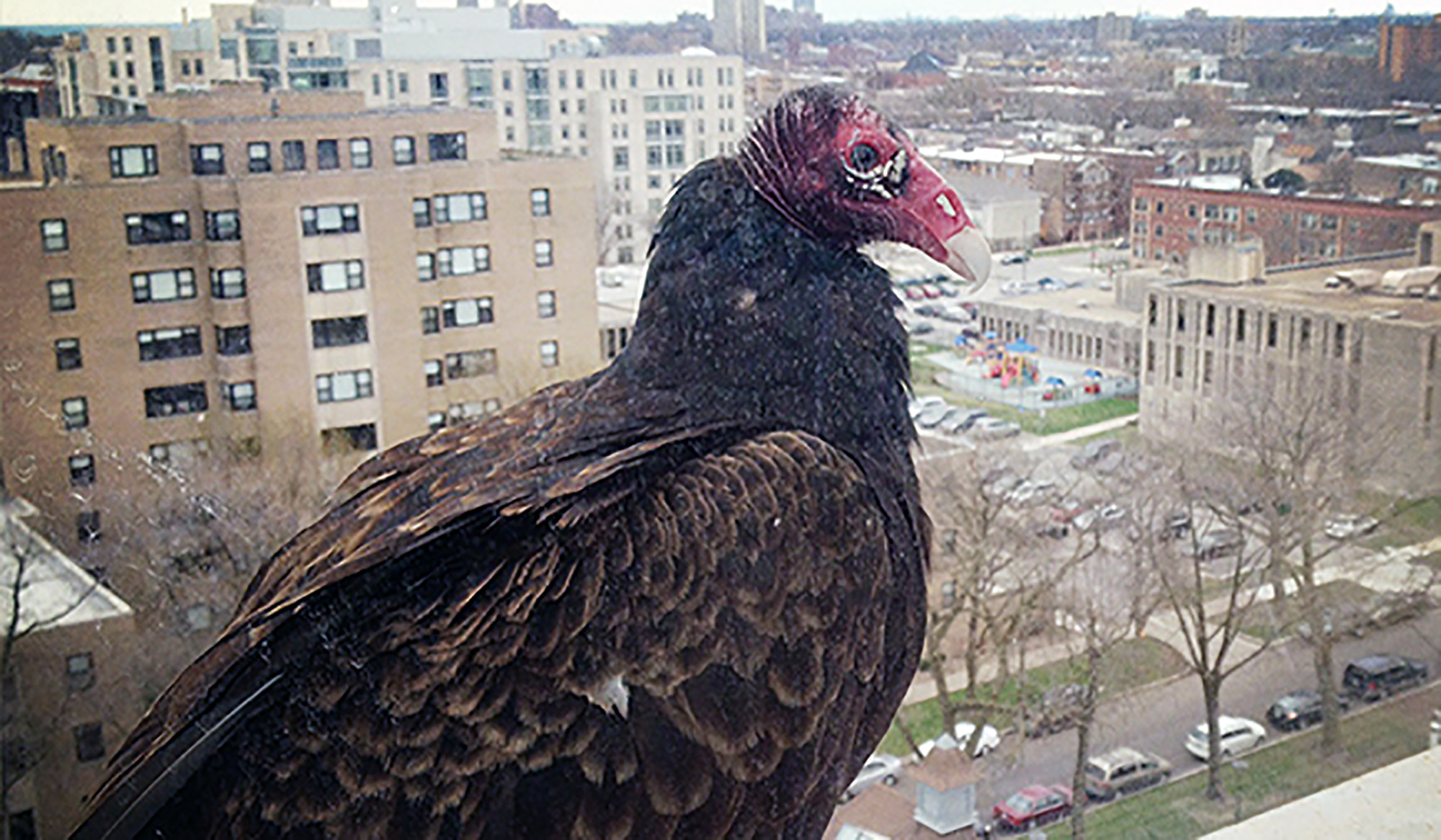 Ominous. Creeptastic. A metaphor for our own death.

These are just a few descriptors students and faculty have used for the two turkey vultures frequently seen on the eighth-floor ledge of the Reva and David Logan Center for the Arts. Guess which one comes from a creative writing professor.

Doing their best wild turkey impression, turkey vultures (Cathartes aura) are recognizable by their dark brown feathers and bald red head. Unlike their portly namesake, turkey vultures are large but light. With a wingspan of six feet and weighing in at a mere four pounds, they can glide on thermal air vents. A group of flying turkey vultures is called a kettle because their wobbly updraft surfing looks like boiling water.

A group of foraging vultures is called a wake, no doubt based on their carrion diet. One of a handful of New World vultures, turkey vultures “have an extremely good sense of smell,” says associate professor of ecology and evolution Stephen Pruett-Jones. They’re scavengers, “but they likely also occasionally eat live animals.” He notes they are migratory and probably winter in warmer areas. “There aren’t a lot of dead animals lying around the ground in Chicago during the winter time.”

While associated with death and decay, and thus fear and revulsion, vultures play a vital role in the health of the ecosystem. Turkey vultures actually prefer freshly dead meat, devouring it before decay sets in. Its genus name, Cathartes, comes from the Greek word for purifier, which also serves as the root for “catharsis”—perhaps a fairer metaphor for the maligned birds.

Turkey vultures do not exhibit sexual dimorphism, so there’s no way to tell their sex by sight. And while turkey vultures mate for life, couples only associate during the mating season. “If the two vultures are being seen together during August to April, there is absolutely no reason to think they are a mated pair,” says Pruett-Jones. “Even if you see them together during May to July, that still is no evidence,” since vultures hunt and scavenge singly or in groups. Without a nest, all we know is that the two “culture vultures,” as Logan staff and faculty call them, are companions.